Heading up Wednesday to the Upper Delaware for float trips on Thursday and Friday. I'll have to admit it will be a nice and welcome change from the slow spring into summer striper season we've had on the Jersey Shore.
Funny thing about fishing, either fresh or salt, is that weather can help or hurt you in a big way. When I left the Upper Delaware a few weeks back things were tough with almost no releases from the reservoirs, no rain, and a trickle of a flow on the West Branch and a little better on the East, but that was heating up, it was a Main stem kind of time. Now let's fast forward three weeks.
With a ton of rain the Cannonsville and Peapacton reservoirs were filled to the brim and started to spill. On the West Branch the FFP called for a 1500 cfs release to start June 17th. So today the West Branch at Hale Eddy is running 2510 (today 7pm), the East Branch at Fishs Eddy is 3850, and the Delaware River at Lordville is 7150, and these are better numbers then they've been.
It seems to be feast or famine. That goes for the releases or the weather in general. When the wind blows- it howls, when it rains- it pours sideways, when the sun comes out- it's scorching. The good thing about the water being in the river is, its in the river which the fish like and its staying cooler as compared to last year when the temps were creeping up too high before the summer even started. 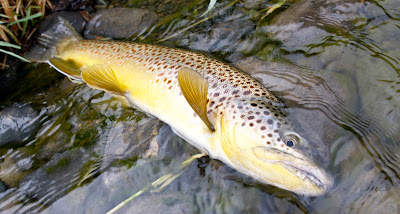 High water is a great time to float the Upper Delaware. For those who love to throw streamers for big trout thing is as good as it gets. The bugs will still hatch but it will take a lot of them to get the fish turned on to them. Hopefully the water will continue to drop and the area will be spared any torrential downpour that seem to be the order of the day this spring.

I'll be on the river Thursday and Friday and will be available Saturday and Sunday if you'd like to come up and have a great float down the river and try and catch some of those big browns in bigger water. Give me a call to get it done...732.261.7291
Posted by The Average Angler at 7:20 PM