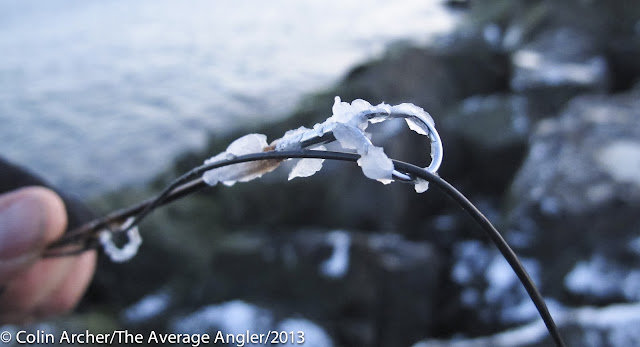 Yesterday I started out at first light north and moved down south when I came out later in the afternoon. After talking with a few guys it seemed north was the place to be as a good afternoon bite turned at the change of the tide. You can only be in one place at a time.

Even though we were warned that the temps were going to drop today I still wanted to get out for a bit At sunrise it was 19 degrees and the wind was at 20. It was cold no doubt. As I made my way out I liked what I saw when I looked down. The footprints from the anglers yesterday in the sand dusted with the snowfall from last night. As I stopped to take the picture I wondered which ones were coming and which going. Who was alone and who was with a friend. Who had a good trip and who didn't. And, who brought a fish to hand and who had a fish story to tell. 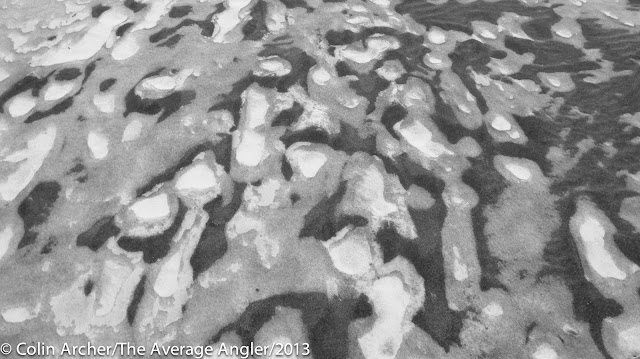 I first started out mid way on the rocks, taking the full W wind on my left side. With the wind and falling tide it made it difficult to fish effectively. Not wanting to give up yet I drove to another spot one where the houses and sea wall gave enough protection from the wind. Without the wind it wasn't all that bad. I worked a slough between two groins without a bump, but one good snag that I strip striked perfectly. I had the whole Jersey Shore to myself until as I left I saw a guy walking out to end in Asbury Park, a spot that offers an angler not one bit of shelter from the cold wind.

Posted by The Average Angler at 10:35 AM