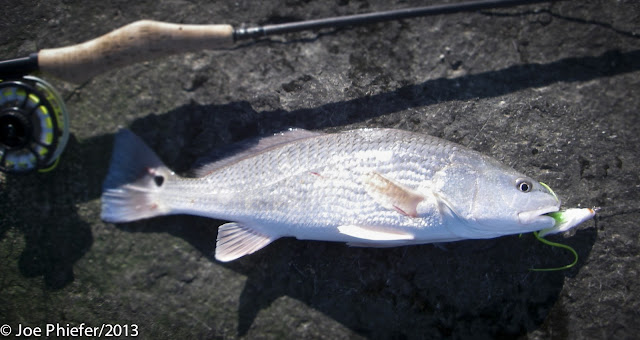 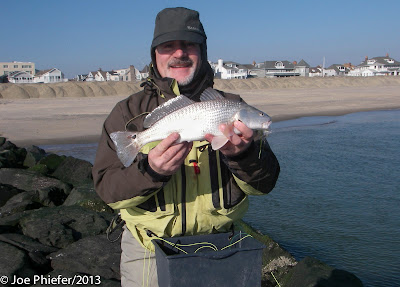 On Saturday after checking the beach and before my wife and I left to celebrate her birthday in Atlantic City I got a call from Jersey Shore fly angler Joe Phiefer. We went back and forth a little bit about conditions and some fish that we're being caught at some local haunts. Then he saved the best part of the conversation for last. "Hey, that's not the reason I called......I got a redfish this morning." I wondered how you don't lead off with that? This year we've all caught a weakfish or two on the fly, and I have heard of guys catching some redfish down by the Barnegat Inlet, but Joe caught this up in our neck of the woods and with the fly rod. I looked on the internet for the range of redfish on the Atlantic Coast- one website lists the range from southern New Jersey down to the Gulf of Mexico the other has it further north up into Massachusetts. redfish, red drum, or sciaenops ocellatus is listed in the 2012 Fishing Digest put out by the NJ DEP, with a one per day limit in a slot of 18"-27". They also list black drum also. I know post Sandy we have seen some non traditional species caught, like last year, when we were catching lizard fish on the fly along Monmouth County.
Like I said I spent the last two days in Atlantic City at the Borgata where we celebrated my wife's &%th birthday with some friends. Great room overlooking the Golden Nugget, the Frank S. Farley Marina, and the Absecon Inlet. I planned on wetting a line Sunday, but a six hour stint on the five dollar blackjack tables while the football games were on kept us inside. 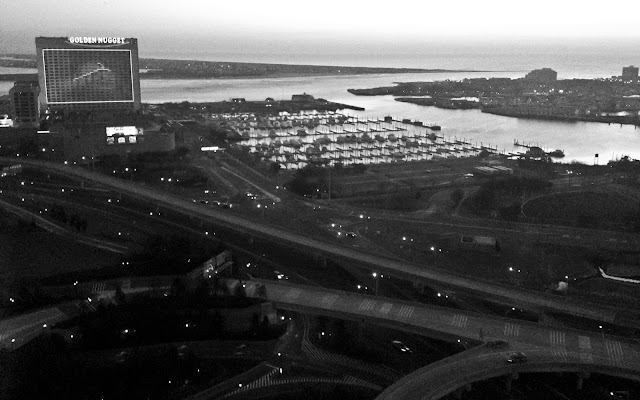 So I planned on getting out when I got home as the tide ebbed around 3 o'clock. It was beautiful afternoon and I was surprised to find so many anglers out this time of the day. Each groin had at least an angler on it, with the one next to the one I picked having six. I started out alone watching as the group north of me caught and released shorts. Then I was joined by a ringer who made his way right to the end, tied on a swimmer, and one his first cast connected with a nice fish that exploded up for it. It was cool to watch....I only wondered if I could get my fly to the same location about 200 feet out along the current seam. He did well landing several nice fish that just measured short of keeper size. 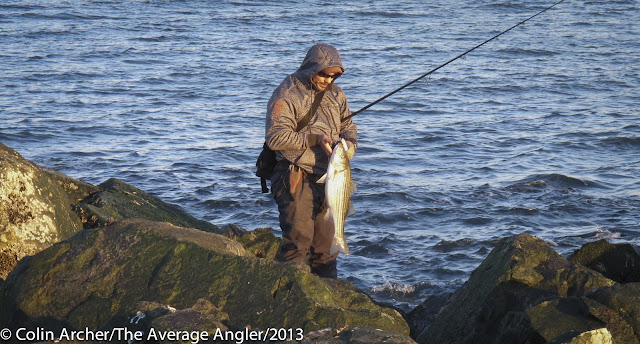 I stayed within my limits working both sides of the groin midway out, working the deeper water that
post Sandy has been hollowed out around the rocks. I stayed till just before dark then relocated a town down throwing the fly in the blackness of night with the groin illuminated by the lights of the town behind me. This is one of my favorite times of year to fish for stripers, along with spring, summer, and of course the fall! 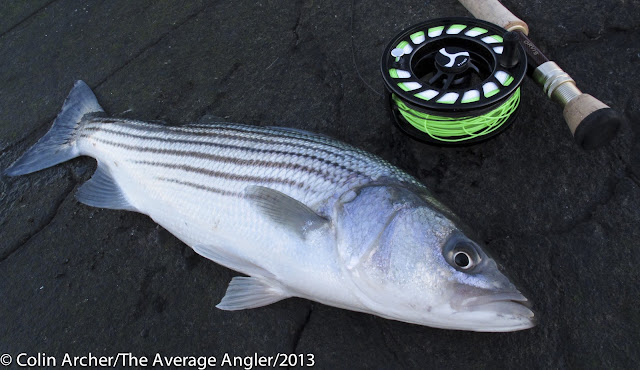 Posted by The Average Angler at 7:16 PM