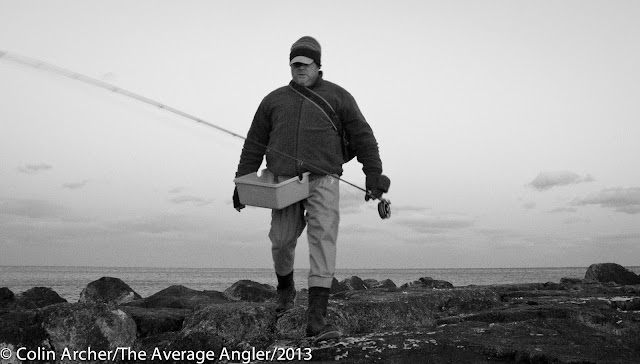 It's not that I'm letting a little cold weather chase me off the beach. And, unlike last year where I hung my waders up a few times, first starting December 22, 2011, and continued fishing through till March 2012, this year might be different.
Yes there have been fish around, as of yesterday there was a good bite for bait, spin, and fly guys alike, but I think it might be "It's over Johnny" time. We are in for some real cold winter weather which includes snow. February looks like it might be a bitch. You can see the Weather Channel three month forecast HERE.
It appears that some of the Hudson stock are wintering over here along the northern Jersey Shore. We all know they stayed last year, and they're hanging in this year. Last year we had sand eels and crabs and there were much larger fish, although I saw some 30+ inch fish caught this past week. Some early herring and currently crabs are keeping the fish that are around fed. Our water temps are from 41-45 depending on which source you follow and it's not getting any warmer. 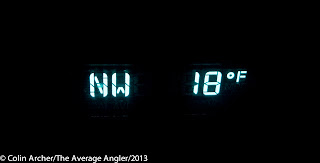 I went out again this afternoon picking the high tide and a balmy 18 degrees, without the wind factor, to give it a go. Hit two spots and with each cast I thought two things 1) I'm gonna catch a fish 2) It's over, and, all the while saying it's f-ing cold! On my way out I decided that I have walked the rocks for the last time till spring. On my way home I saw Al out on the rocks, braving the unprotected cold spot he has made a living at, and I figured I would go and tell him it's over.
I took the long? walk and without my hat that I left in my truck. By the time I got to him I thought my ears were going to pop off. So as I explained that it was over, his rod twitched, and then he set the hook. A nice fat strong short fell for the clam and after a quick pic he was back in the water. No doubt he'll join up with his buddies and start heading for the Hudson in the next day or so.

Remember I said it here- "It's over Johnny"- but I said that a dozen times last year! 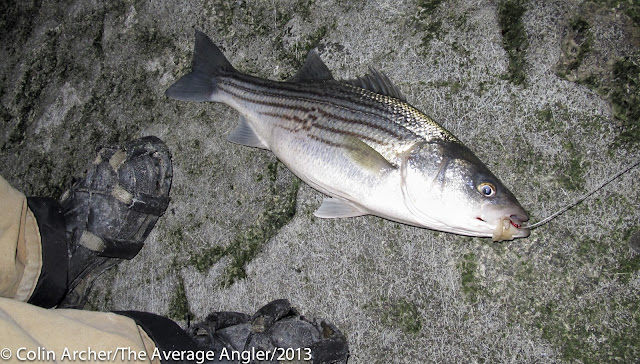 Posted by The Average Angler at 7:03 PM