01.08.12 Slow afternoon....but that changed when the herring and bass showed up! 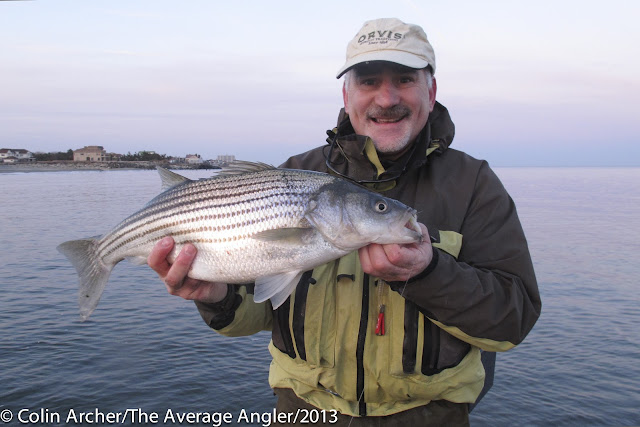 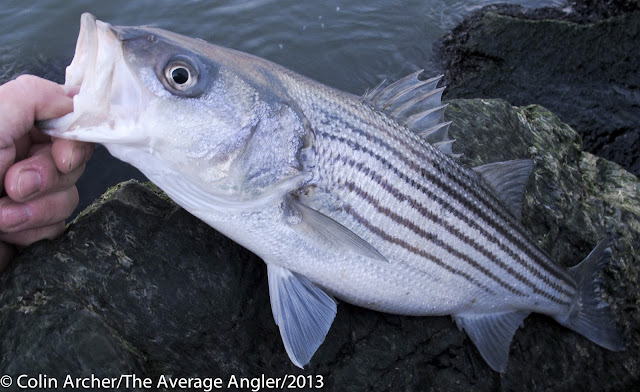 What a difference a tide makes. Or moreso, what a difference fishing different times of the tide can make. Started out this morning before first light.....tied on a popper hoping to get one up on top. Worked the extreme end of the groin without a bump. Switched flies and then surprised into a miss right tight to the rocks. I was off the beach by 730 and in front of the computer to edit images from a current assignment I am working on.
The tide changed at 10 A.M. and I decided to give it a go at noon. It was low and slow wherever I stopped, although I did find a regular hooked up with a nice bass just under keeper size on a clam. 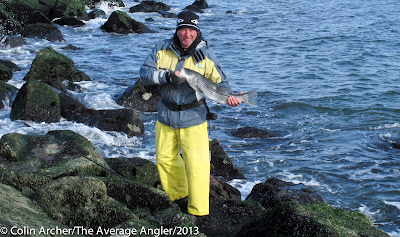 I took a drive north and pulled in only to find fly fisher friend Joe's car parked on the street. I made my way down and we started fishing around 130. It was slow. I made my way to the end of the rocks and fished super fishy water without a bump. It was hard fishing....rock fields just under the surface of the incoming tide and a gusty S to SW wind. When I came back up I met up a with a few young guys who follow the blog and fish every minute they can. One caught a short on a teaser. While I talked to them Joe made the trek to the next set of rocks. I soon joined him and he had just caught the last of four micro bass. I decided to hit the end of the rocks again, this time casting with a stronger SW wind that made balancing on top of a rock and managing line a task.
I made my way down and up the rocks to surer footing and Joe made his way back to out original spot. I made casts on the south and north sides without a bump, and was feeling that today would be a skunk of a day. But it was only 330, and high tide was a half an hour away, and the sun was setting, and the wind had calmed down a bit. Even so I was feeling like I was done. I took a few more casts next to Joe and let him know I was done. As I departed Joe said he saw a swirl behind me tight up to the beach. It would take more than that to get me to stay. I turned.....he made a cast.....he went tight......I turned back and stayed. 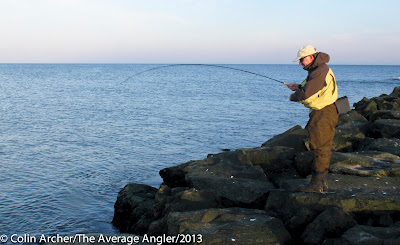 After he landed what was a sweet fat bass I told him I was going to make a few casts up towards the beach. A few strips later and I was tight. Over the next hour and a half we caught and released 9 sweet fish, those on top of Joe's previous four. There were four other non-fly anglers fishing out towards the end from us, and only one fishing the opposite side caught a short. The guys on our side were throwing Bombers and shads......and none got a bite. It was just a fly rodders kind of day.
We saw the swirls.....and found they were on herring....10 inch herring as one of the spin guys snagged one on his retrieve. The action continued through the slack tide and slowed on the start of the outgoing. The whole time the water remained flat...and fishing to swirls at 60 foot away was fun, although some of the bass hit almost next to the rocks. As darkness fell I said to Joe, "I told you I was done.", and we walked to our cars commenting how this January is starting out pretty darn good.

If you are interested in some winter striped bass fishing from the beach and rocks please give me a
call 732.261.7291 or drop me an email colin@theaverageangler.com. For more trip info check out my website www.theaverageangler.com 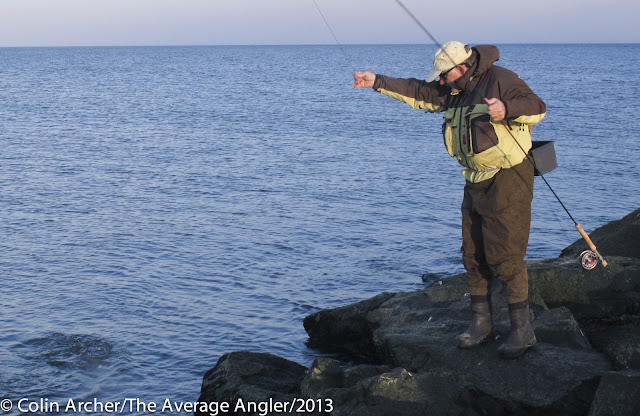 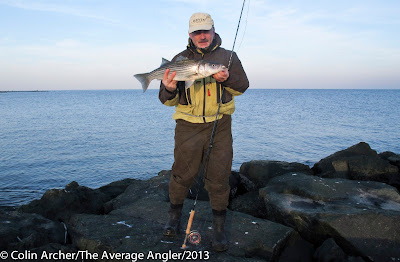 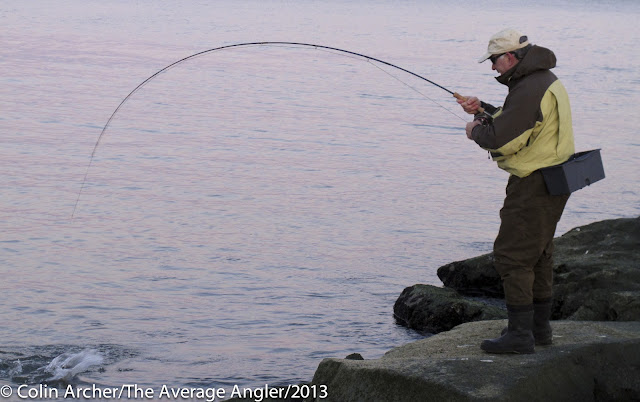 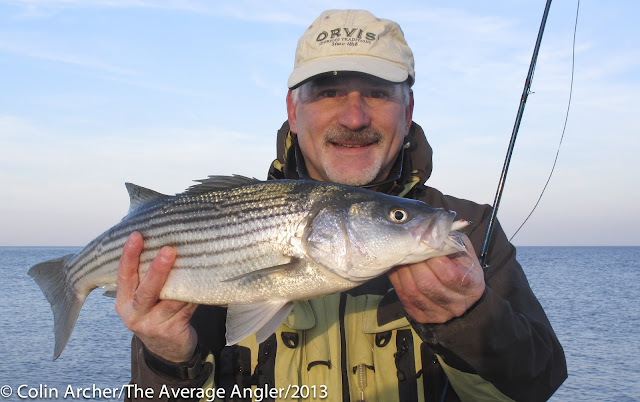 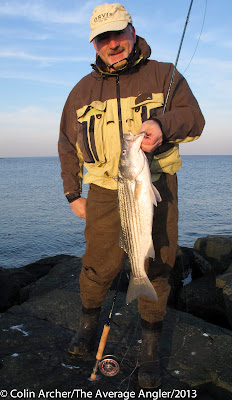 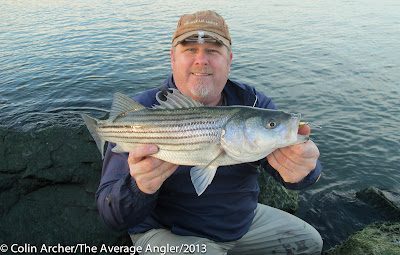 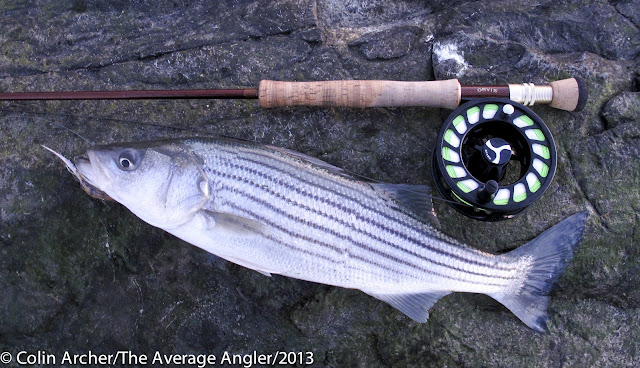 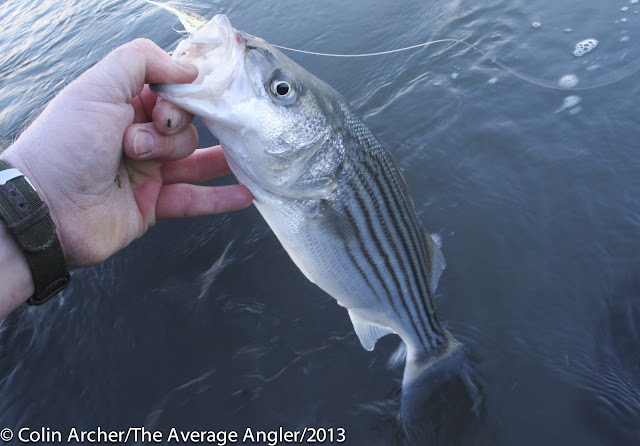 Posted by The Average Angler at 6:57 PM