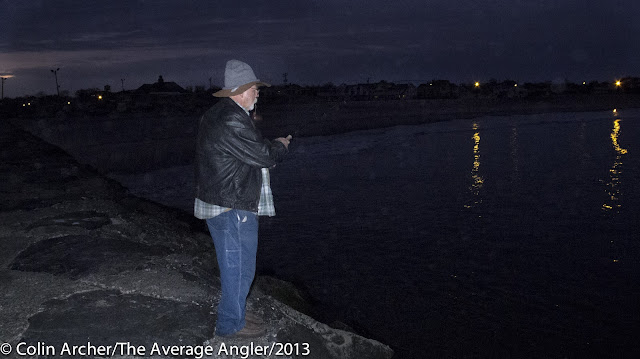 So today I had a few shots to fish....trying to get it in before the blustery weather rolls in this week. Things have been kind of slow, and it's getting slower. Spin guys working rubber eels, slow swim baits, and bucktails have been catching, and the clam guys are in their glory. But fly wise for me the last two days have been slow. Had a nibble yesterday and not one today.
Got out at sunrise cool 27 degrees, alright cold 27 degrees, and the outgoing water flat and gin clear. Had to hunt for white water. Tossed the fly around the rocks for about an hour as a guy out front connected on two shorts about 300 feet off the rocks. I planned my day to get out in the afternoon at high tide (which appeared to be about 6 inches higher than low tide) and see what the ocean might look like then. It looked flat and clear. It gave the birds easy pickins at the crabs that must have looked like Big Macs on the bottom of the ocean. I worked hard throwing crab flies, Clousers, and even a white Snake Fly without a bump. Then I moved, and more of the same. Saw one keeper caught on a clam.
Before heading home for dinner I stopped by one last spot hoping to find some good current to cast into. As the sun set and as I walked out on the rocks I saw a guy throwing a fly rod. As I neared him he turned around and started talking to me. He said he saw fish jumping and was using a 5 weight rod with an Egg Sucking Leech. He was from PA and never fished the salt before. He had no stripping basket and the fancy pipe made him look like he would be more at home on the Upper Delaware. Hey, to each his own I thought, but I, "a true striper fly fisherman", had to go and get busy. I turned and took two steps and heard him say, " Oh, there he is." I turned back and he was tight.
I told him he'd have to walk back to the beach as the 5 pound tippet wouldn't be strong enough to lift the fish. We walked back and jumped down on the sand and as soon as the fish got into the wash it flipped off. First time "striper" fishing and he hooked up on his first outing, no to shabby. I jumped back up on the rocks as he turned and left and waved good bye. I fished for another 45 minutes....not getting a bite. I wonder if I should bring and Egg Sucking Leech out tomorrow?

Big props out to my man Rob Ceccarini from the Orvis NYC store who hooked me up with a pair of my favorite Endura bootfoot felt bottom waders. It was nice to be leak free and stick to the rocks like glue. 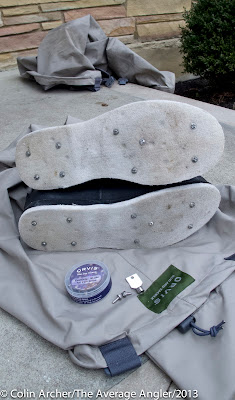 Posted by The Average Angler at 6:38 PM