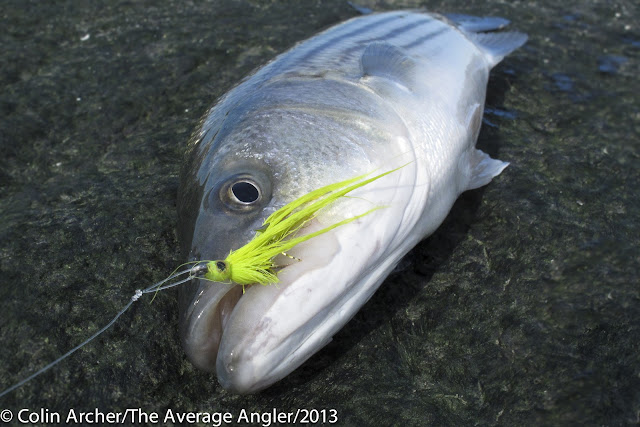 Absolutely great day out on the rocks today. Even though the air temps were just above freezing the sun was high and bright and there was a slight west wind. The water was gin clear and even the high tide water was low and flat. You wouldn't think it would be a good day for winter striped bass fishing....well it was.
Got down on hour four of the flood tide and went to work with a larger bunker fly.....getting one bass to bite on it as I took it out of the water......but only to become unbuttoned as it caught me off guard. I moved to the north side of the rocks and had a nice bass follow it right to the rocks and make a u-turn. Then it got slow. I made a few fly changes, going into a pink and white Clouser which didn't get a bump, then went to a orange Joe Cordiero Flatwing, which didn't excite the bass either. As the tide started to ebb I tied on a chartreuse Deceiver-ish  fly and slowed my retrieve down to a slow crawl. Then things picked up. It became a great couple of hours of enticing, missing, hooking, dropping and landing striped bass- with a handful to 22'' landed and probably a dozen missed.
It was basically a game. I would make a cast, let the sinking line sink taking the fly with it, and then slowly retrieving, stopping, and high sticking the fly to a slow jig. Almost all of the action was visible in the gin clear water. I had one keeper sized bass follow the fly, eyeball it, rise with it, and turn away just before it reached the waterline. The fly appeared electric in the water- visible for tens of feet even slowly retrieved down deep. Often I would see the flash of silver with black lines as the bass would explode from the deep water or out from the rocks. It was that good.
This is one of my favorite times of year to fish for striped bass. I almost have the entire Jersey Shore, or at least the Monmouth County shore to myself, as today I could only see a few anglers out from Long Branch down to Bradley Beach. Last year my first bass of the year came on January 4th- so this year is better already.

Yesterday I saw a keeper bass caught on clams.....and couldn't resist the urge to return back there at night. Basically it looked the same as it did during the day, only darker, with moonrise happening just an hour before midnight. I made a move on the rocks and heard a flapping as I made my way back to my truck. My favorite beach/ jetty/ groin waders- Orvis Endura Bootfoot w/ tungsten Posi-Grip Studs HERE- had separated at the felt sole and sprung a seam leak. These waders have been worn just about everyday for a year, all year, so they have served me well. (Today I used some handy dandy electrical tape to make a field repair before heading out on the rocks.) At my second stop last night, which was back to where the day bass was landed, I watched as a guy got out of his truck, walked down and fished, and fifteen minutes later walked back off, carrying a 33" fat bass that he caught on a black swimmer. Seeing that kept me there for two hours till midnight without a bump. Tonight will be a different story as Black Snake Flys will be served up for a midnight snack. 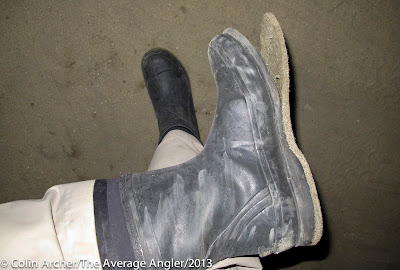 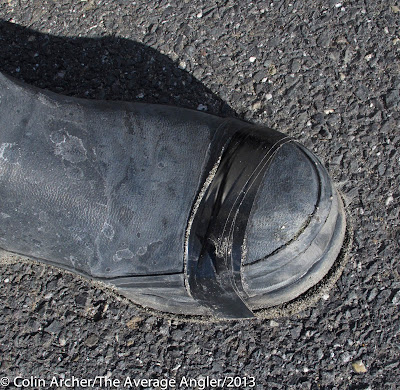 Just a note- these are my saltwater only boots- not used in freshwater to prevent the spread of invasives like didymo.