Today I finally got in on the Clear Cure Goo craze that hit the fly tying world last year. I ordered up some on Thursday and asked Brian Carson if he could get it out that day. He emailed be back and said it was already gone. Today I cranked out some Deceivers and Clousers and can say that I'm done 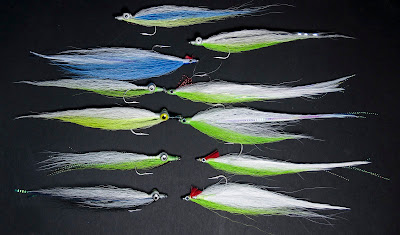 looking at chartreuse and white. Later in the day I started playing around with some yak hair and tying up a bunker fly, motivated by the 12 inch bunker that I found in the Raritan Bay and Navesink River the last few days. I mixed up four colors and got the fly out to 10 inches. Just as I was ready to come up with a plan to finish the mailman dropped off a box and in it was the Clear Cure Goo.
I opened up the box and remembered I had ordered the basic kit which came with two tubes of 'Goo" , a blue light, some applicators, and in addition three packs of eyes. I used the 8mm eyes on this bunker fly and the "thick" Goo on the head. I was able to apply and then form it while holding the hairs back easily and then hold the blue light to set it. In 10 seconds it was cured.
I am looking forward to using it on other flies, especially the Clousers that take a real beating while fishing from from the surf and the rocks. My early concern is, I think I used a lot of it on just this one fly, and each replacement syringe is $10.50 for 10ml. Also the dumbell eyes, which are nice, are $6.75 for six pair.

I find that I beat the piss out of flies while fishing the Jersey Shore salt so I don't know if I need flies that are prettier then they are durable. 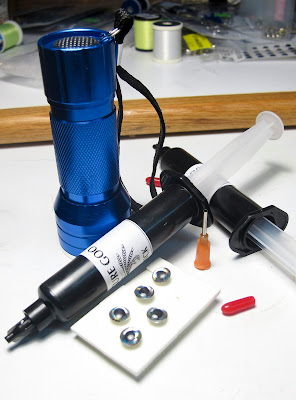 Well the weather has changed up a bit. Wind's from the N at 27 kts and that should slow things down for a few days. Everyone is kind of on standby with the most productive areas the back bays late evening or at night as the bass chase the bunker in the shallows.

Posted by The Average Angler at 8:08 PM