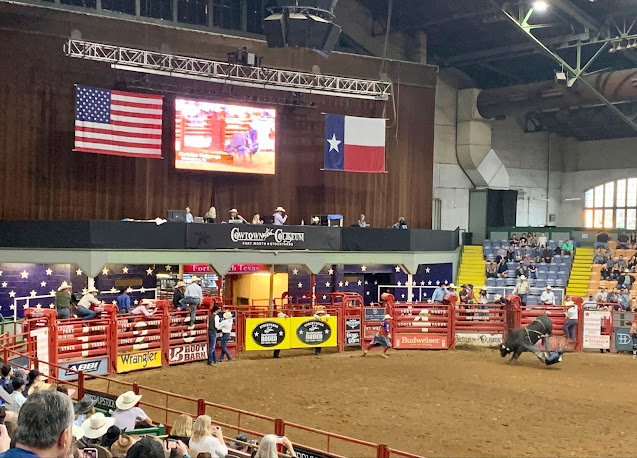 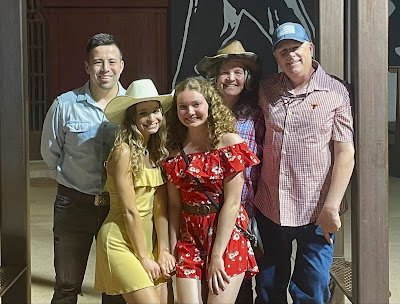 ....well actually it was. So we just got back from five days in Texas, stayed in Plano with Tara, Theresa's oldest daughter, and her boyfriend Simon. It was Downtown Plano where we stayed and there was great food, drink, coffee, and thrift stores. We did the rodeo at The Stockyards in Fort
Worth. They took us to Dallas where we ate in the Deep Ellum District, Pecan Lodge, and had a 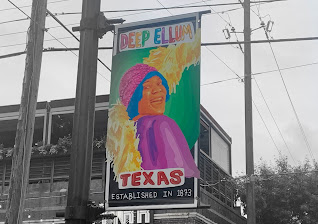 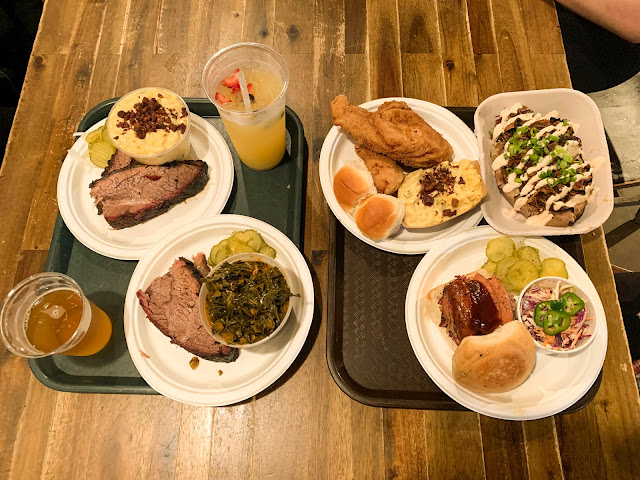 great meal which was, I'm thinking, as good as it gets as far as brisket, coupled with Mac-n-Cheese, collared greens, fried chicken, pickles and onions, and cole slaw.  We, well I, ate way too much, but was in check as far as the adult drinks were concerned, but did enjoy one day of Dallas Blonde's, 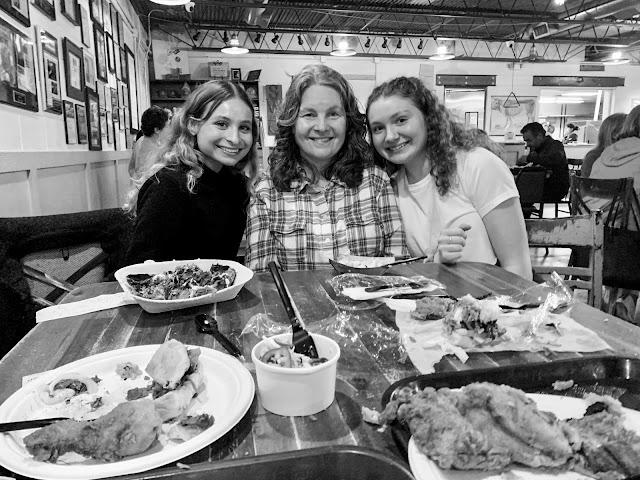 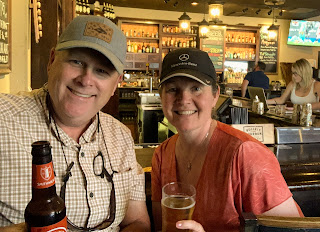 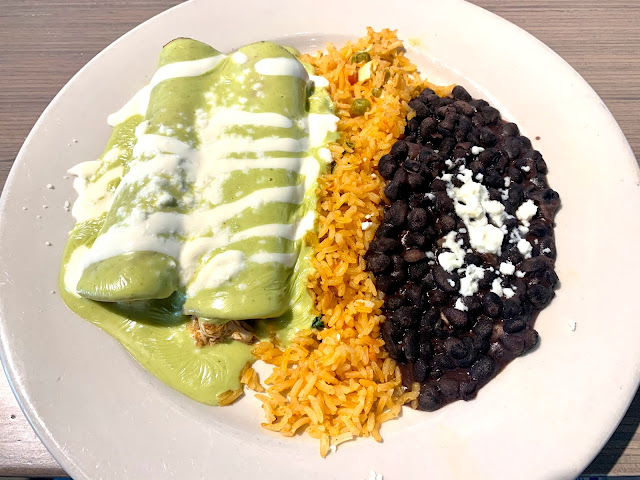 another of Smithwick's at a local Irish Tavern and another day with some Modelo's when we dined at a place called Miriam's in the Arts District of Dallas. I did have a plate of crawfish, it was called something specific but I can't recall. I got to see the location of the assisiation of President 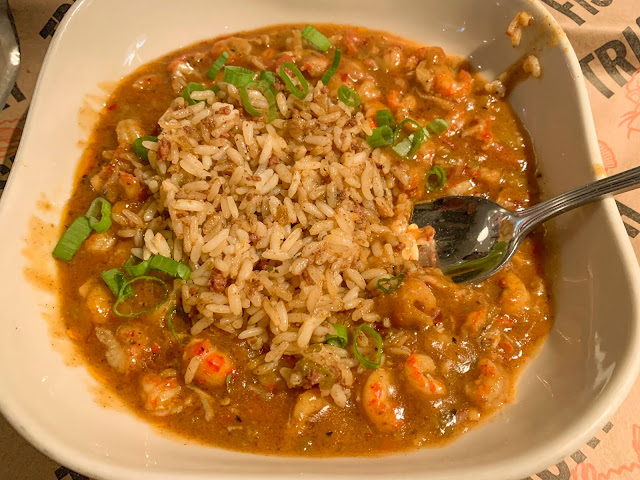 Kennedy, kind of surreal actually seeing it in person after having seen it every which way my whole life. I describe the DFW-Plano area as sterile, millennial, and commercial, add beautiful too. 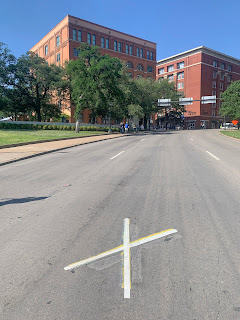 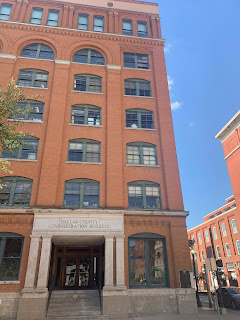 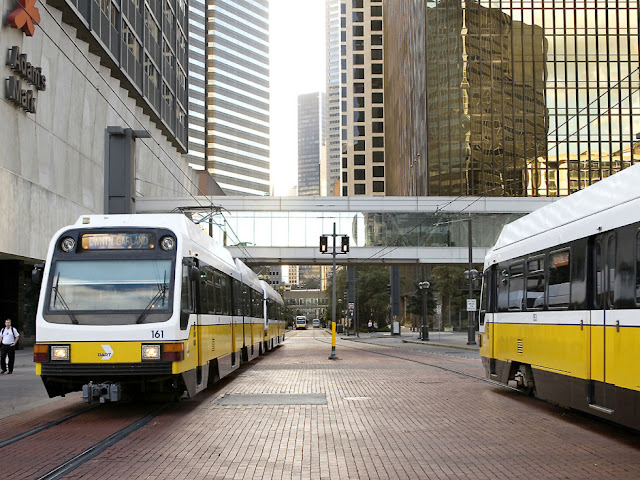 Before I get to fly fishing, there's one story. On Saturday we were taking the train, The DART, as they call it, and we were traveling in downtown Dallas. There weren't;t many riders and we, well looked like tourists, suitcases and all, and all happy, and white. Anyway, a sketchy woman gets on the train followed by a sketchy guy. She sits, ect to Lauren and I am seated across from Lauren, and the guy is standing over me. He pulls out a hunting knife, a fixed blade gut knife, which is about two feet from my head. I'm figuring he's gonna backhand stab me, or lunge at Lauren. So I just remained calm, made eye contact with him, like saying "Are we going?", with my most menacing look, and luckily the train arrived at the next stop and he bolted. So that went well. Either I was gonna die or he was gonna die. I really just sat there staring at him picturing me on an episode of Homicide - Dallas, to The First 48, which I have watched a thousand episodes.
Now to fly fishing. I read John Cole's book Striper while away. Great read. I found a great fly 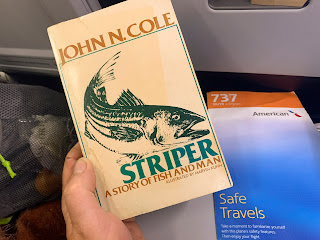 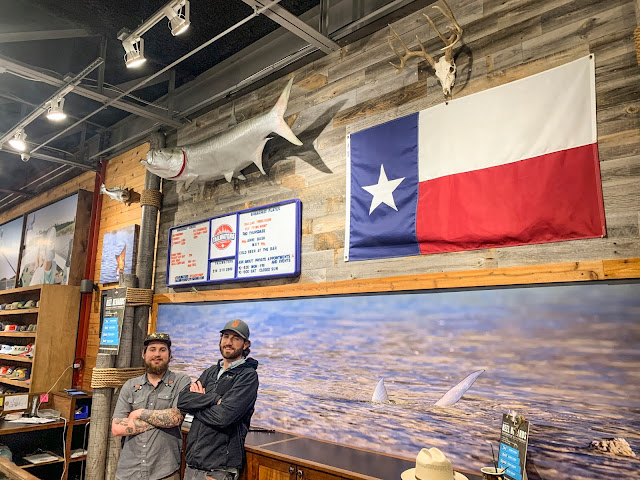 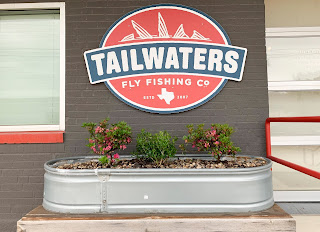 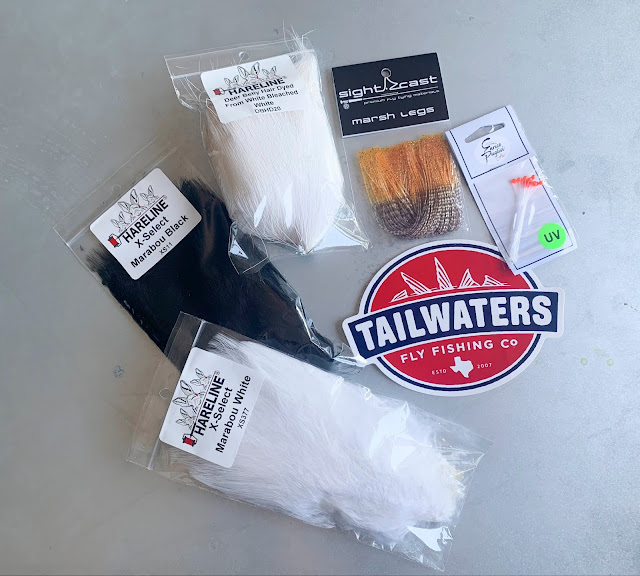 shop called Tailwaters in Dallas and Christian and Chris let us in after hours and we bought a bunch of stuff including some Dead themed apparel and fly tying materials, mostly to tie some small Snake Flies for the river, and some crab fly parts for Martha's Vineyard (T minus 30 days). The coolest part of the fly fishing shop, although dangerous, was the full bar located in the rear of the store. 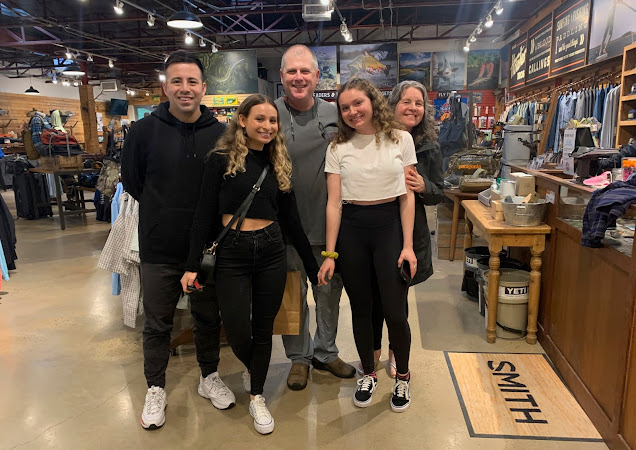 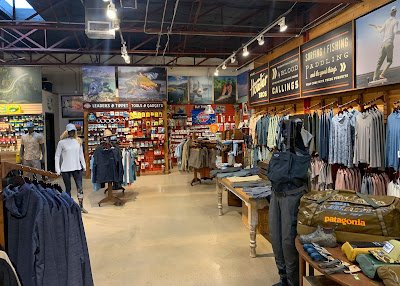 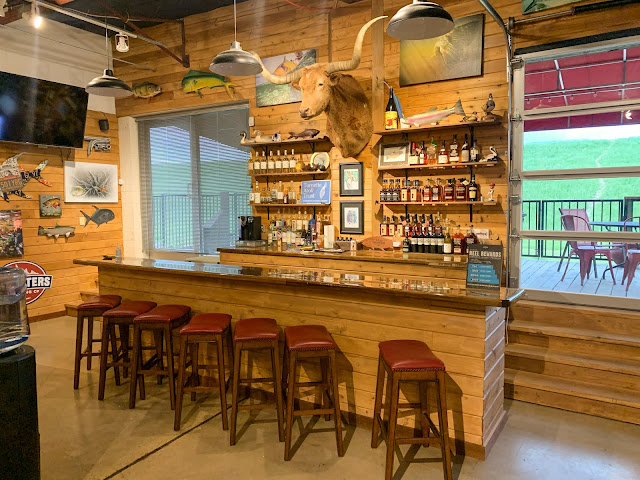 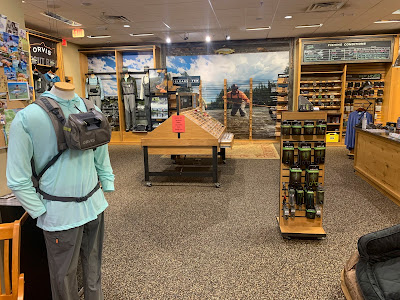 I also visited Orvis Plano and picked up some material they call Dragons Tail, never saw it before but I'm going to twist some flies up with it and see what attention they get. 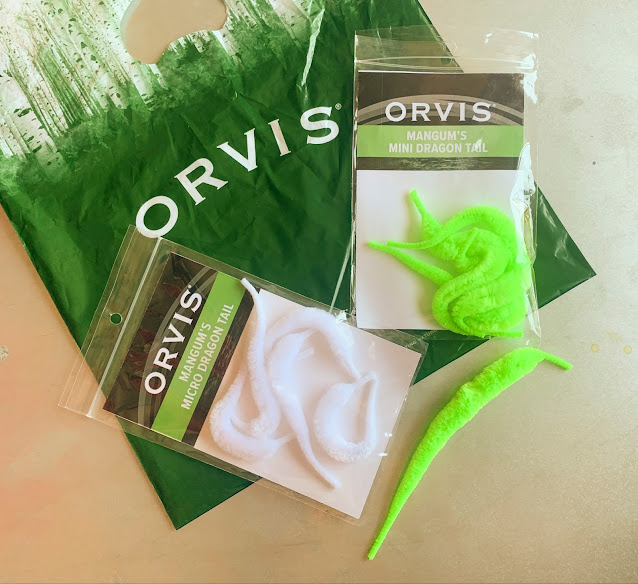 with it and see what attention they get. And then there's my new cowboy boots, you know, when in Rome..... I picked this pair up at a local thrift store, genuine snakeskin, and they polish up real nice as we found a sidewalk cobbler at The Stockyard. Cowboy boots are a thing down here and we 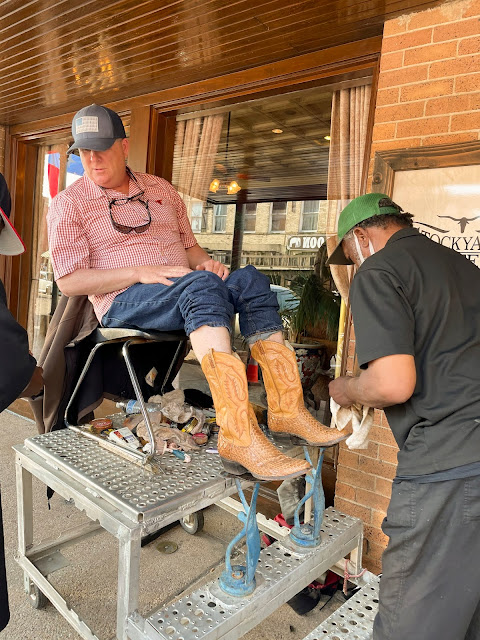 went into a store called Cavender's and checked out the hundreds if not thousands of pairs they have for sale. I am sure we will return to Texas someday. I think we covered a lot of ground in the short time we were there, oh yes and we did hit the gas station chain, the worlds largest, called Buc-ee's, 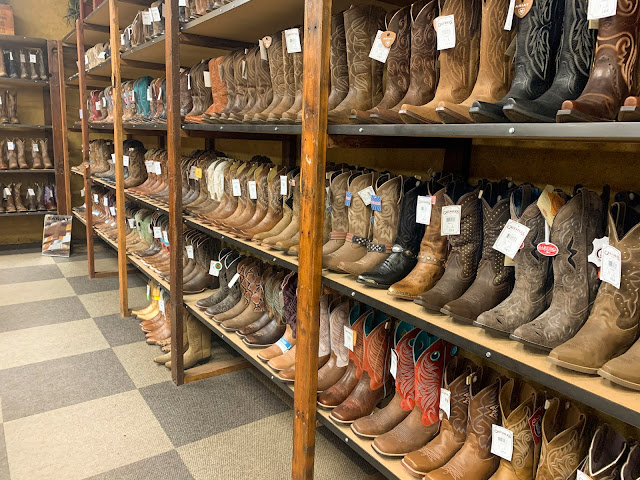 couldn't forget that. One oft the coolest things in downtown Dallas was the old trolley that were part of the McKinney Avenue Transit Line. For now, its back to work, back to fishing, and back to wearing my Skecher's. 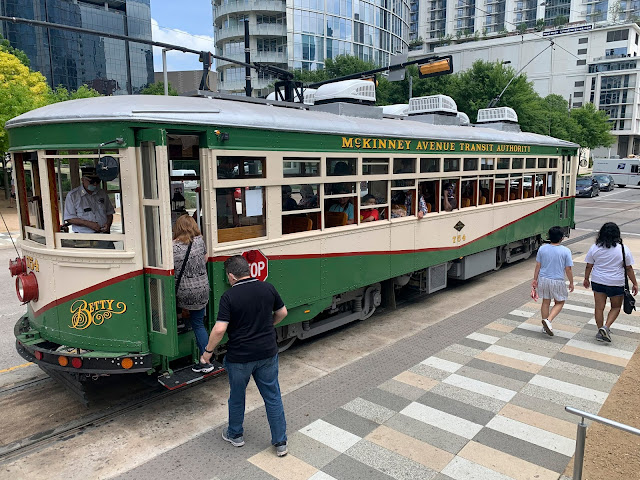 Posted by The Average Angler at 8:34 PM