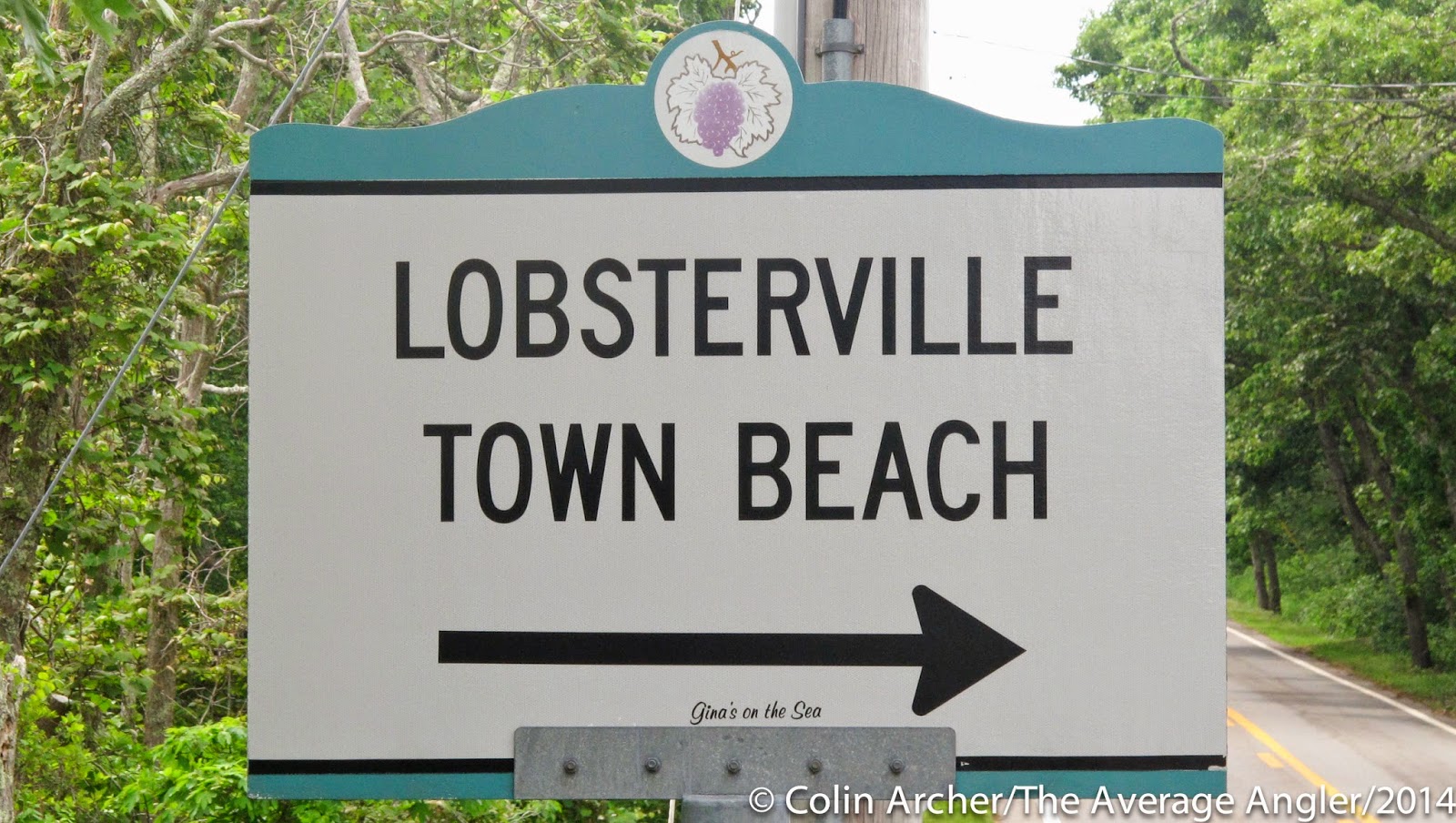 I had the pleasure of being invited to and joining Joe, Dick, Gerry and Steve for a week up on Martha's Vineyard. A core group of guys goes every year for decades and every now and then they have an add on....well I was the lucky guy. Primarily what everyone is looking to do is sight fishing for striped bass. Our house was in Lobsterville, which is the one of the premier places to see big bass roaming in shallow water. Note.....to sight fish you need high and bright sun and no to a little wind. If you don't have that it's very difficult to accomplish. We had six days to fish, and in the end, I would say we had one good day to see and get a shot at some bass. 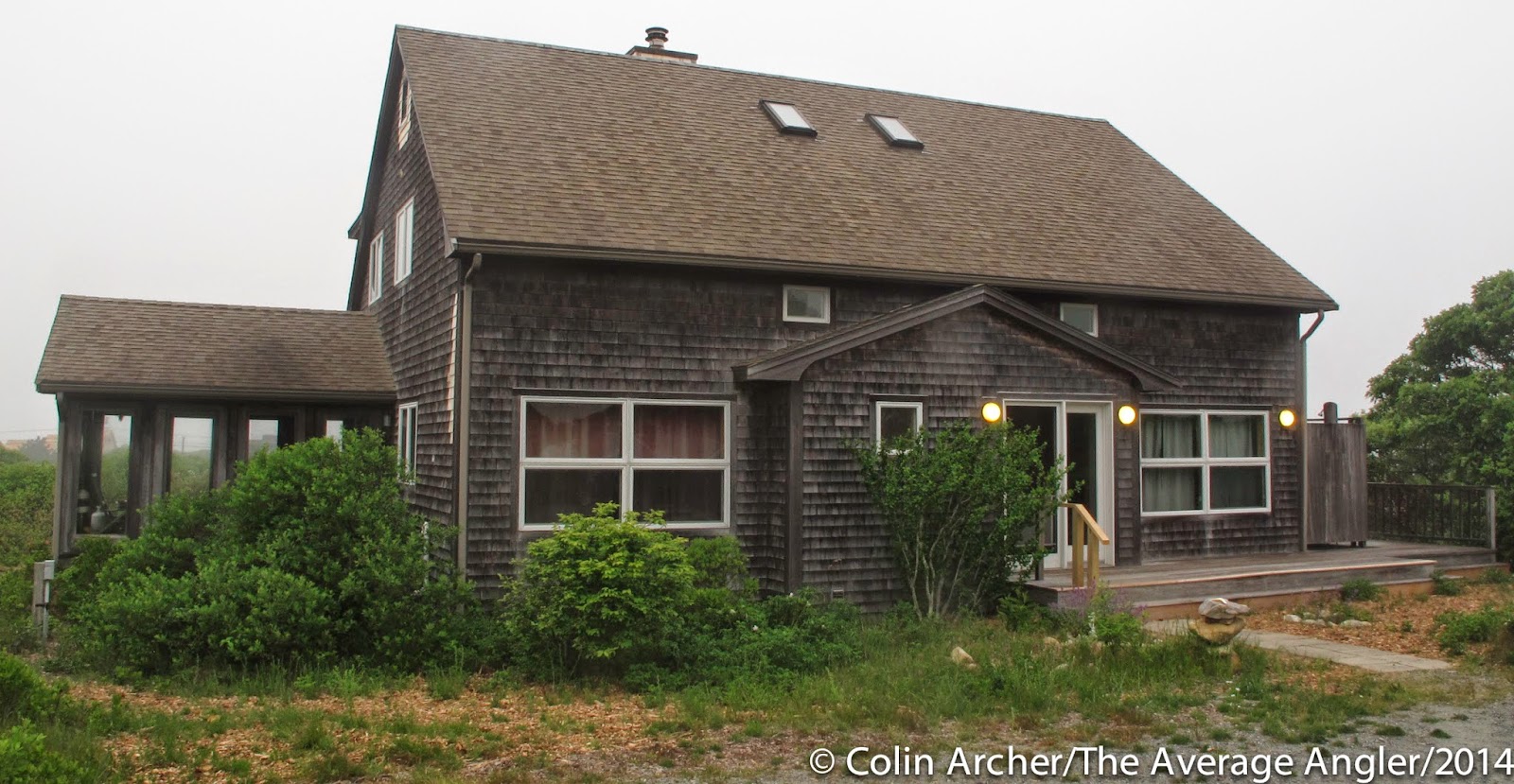 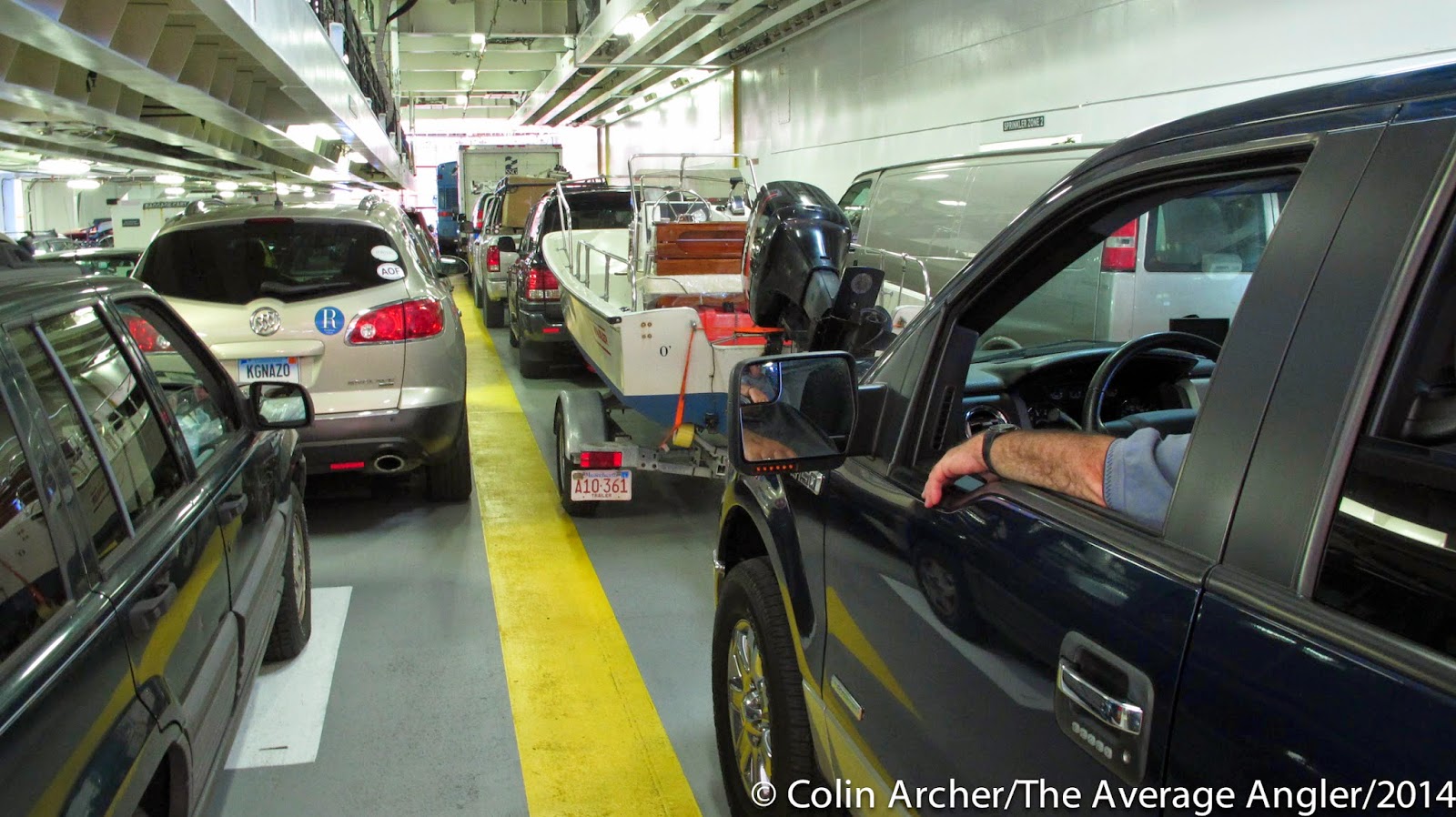 So we rented this house and after taking the ferry over we stopped at Larry's and then Coop's to get the low down on what, where, and when we might find some bass. Joe remembered that a small white fly was the ticket last year so we picked up a few and when we got into out house I tied a bunch up for the boys. It was the "official" fly of the trip. 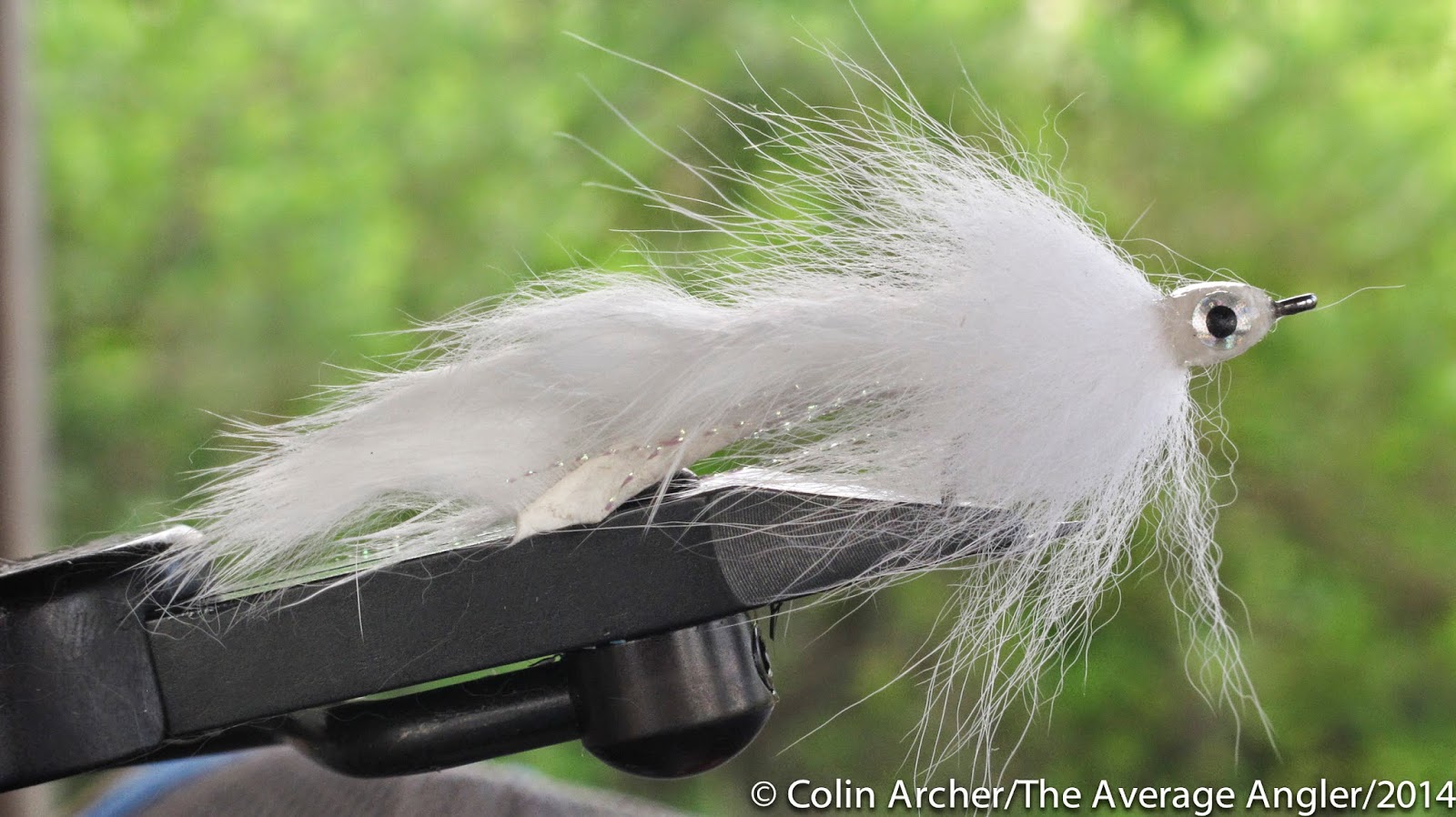 The first night I was gone. I logged over 5 + plus miles kind of like on a scouting mission. Well, I found them, they were mostly in a deeper channel and there a lot of them, most of them 14-24 inches, with a few bonus fish mixed in which we would find over the course of the next week. Gerry's 36" fish was the biggest of the trip dredged up from the depths with 560 grain line. Below is one that was 30" 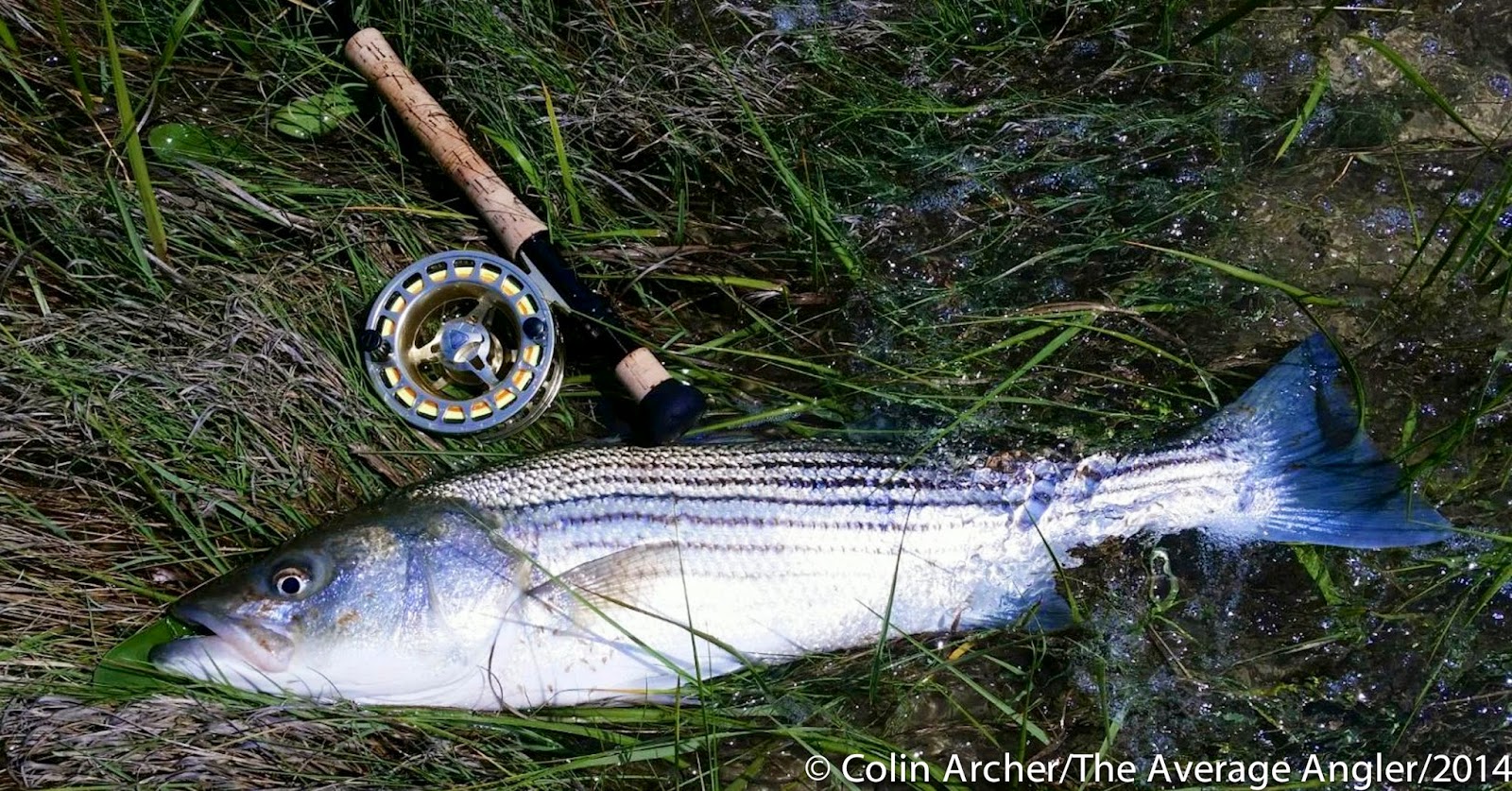 Over the next several days we watched the Weather Channel and every wind app that we could find...it never seemed to lay down, and it switched hour to hour at times. We spent a lot of time dredging with sinking lines just to get out and fish. Every morning I was out and fishing before 5am. I found fish to 30 inches and on that rare time when the sun popped out and the clouds disappeared a few really, really nice fish came into view and range. 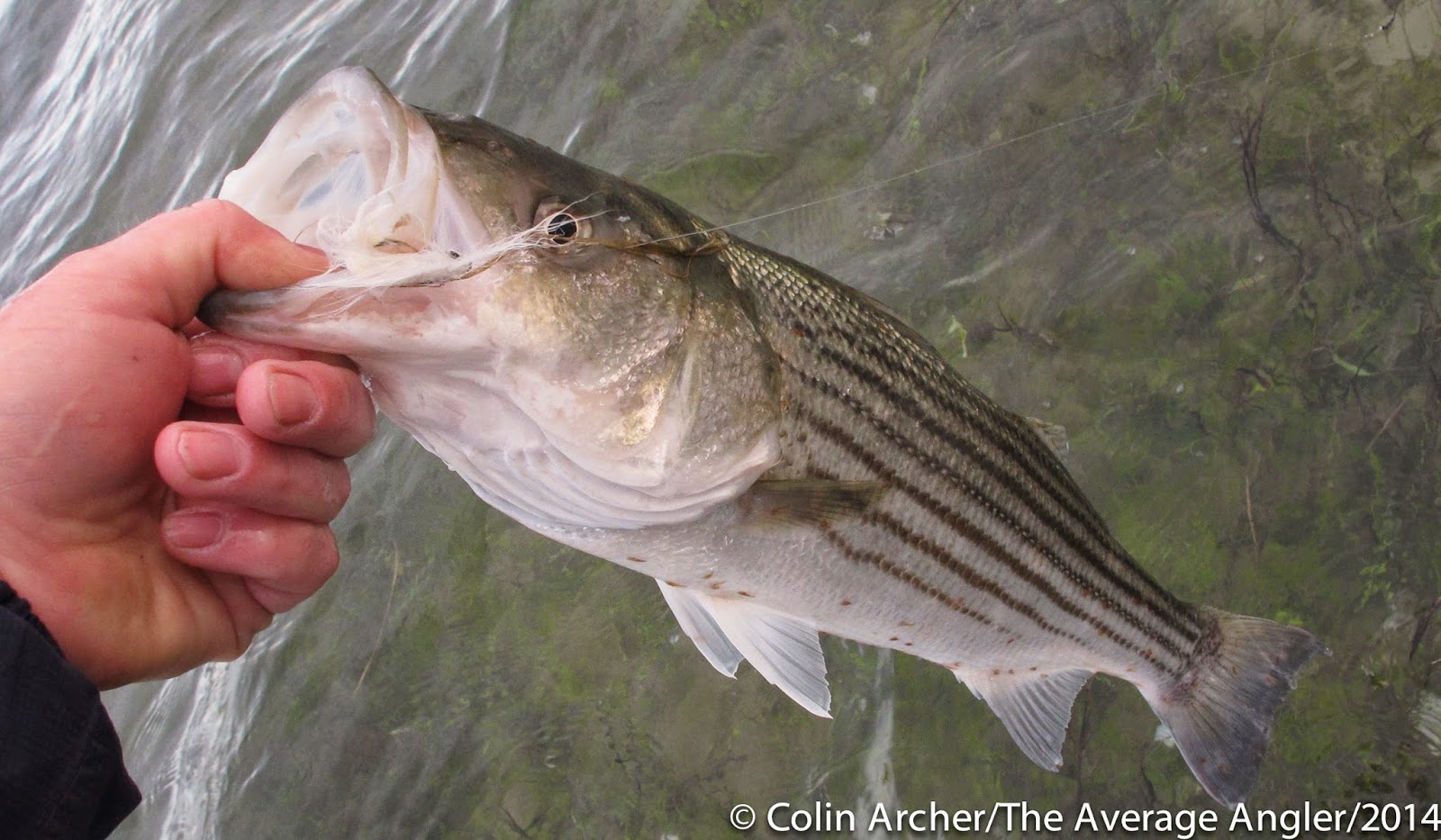 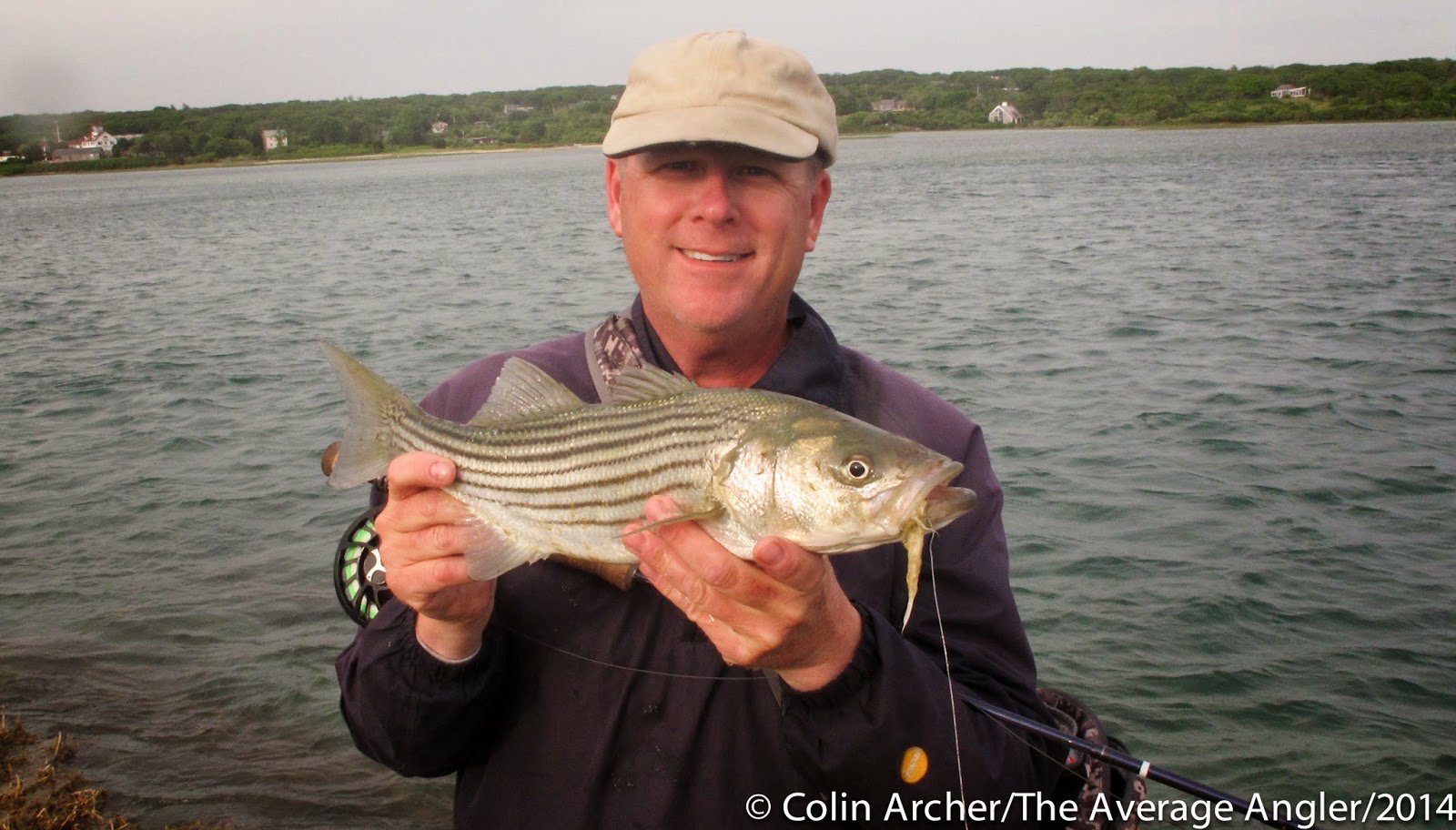 The food was great from Steve's breakfasts to Joe's dinners and then hot dogs and Bubba Burgers mixed in with Dick on the grill. The conversation was always great and being the young guy at 46 it was fun to listen to fishing stories, and of better fishing, in times past. On Sunday the weather broke 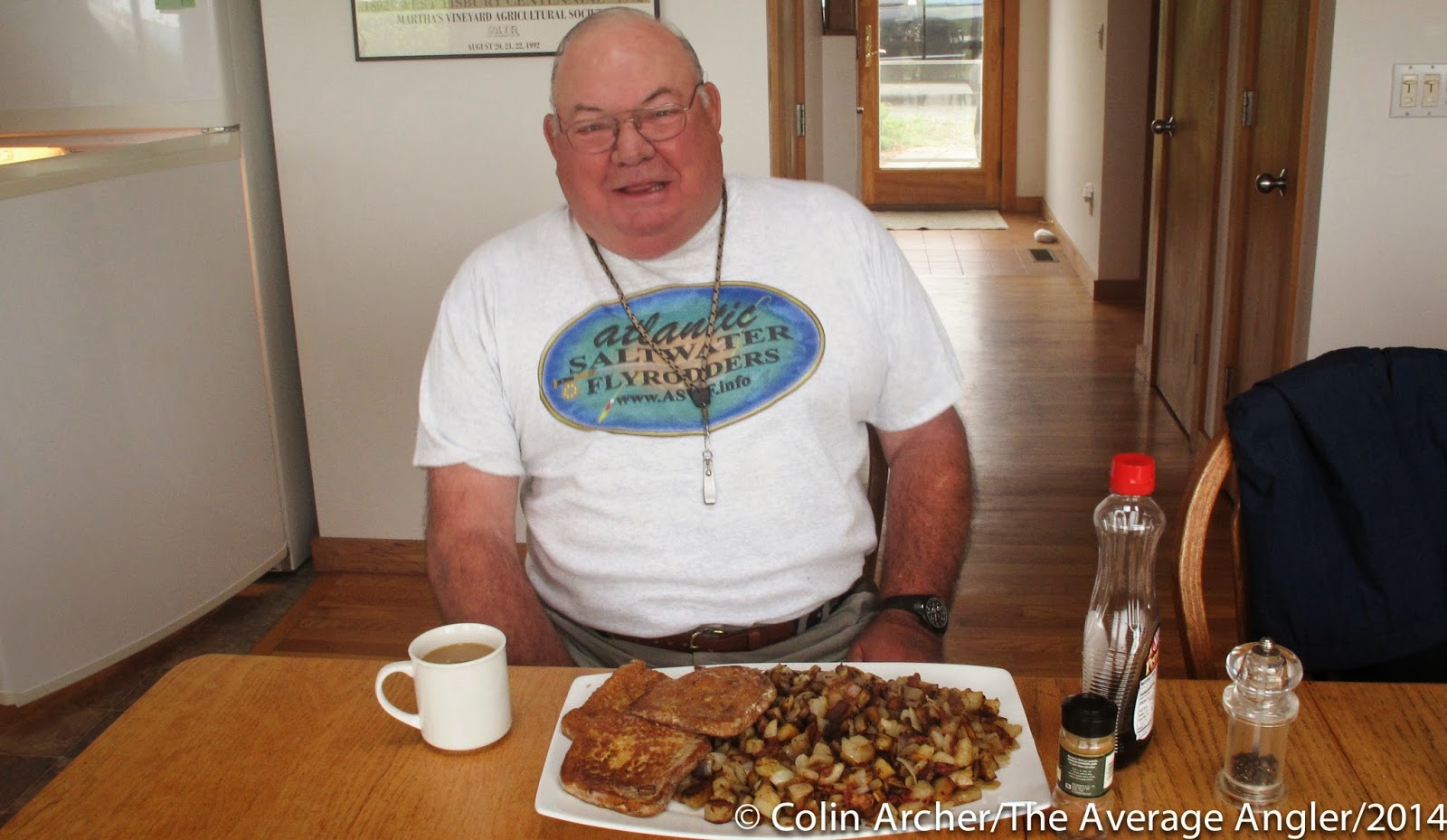 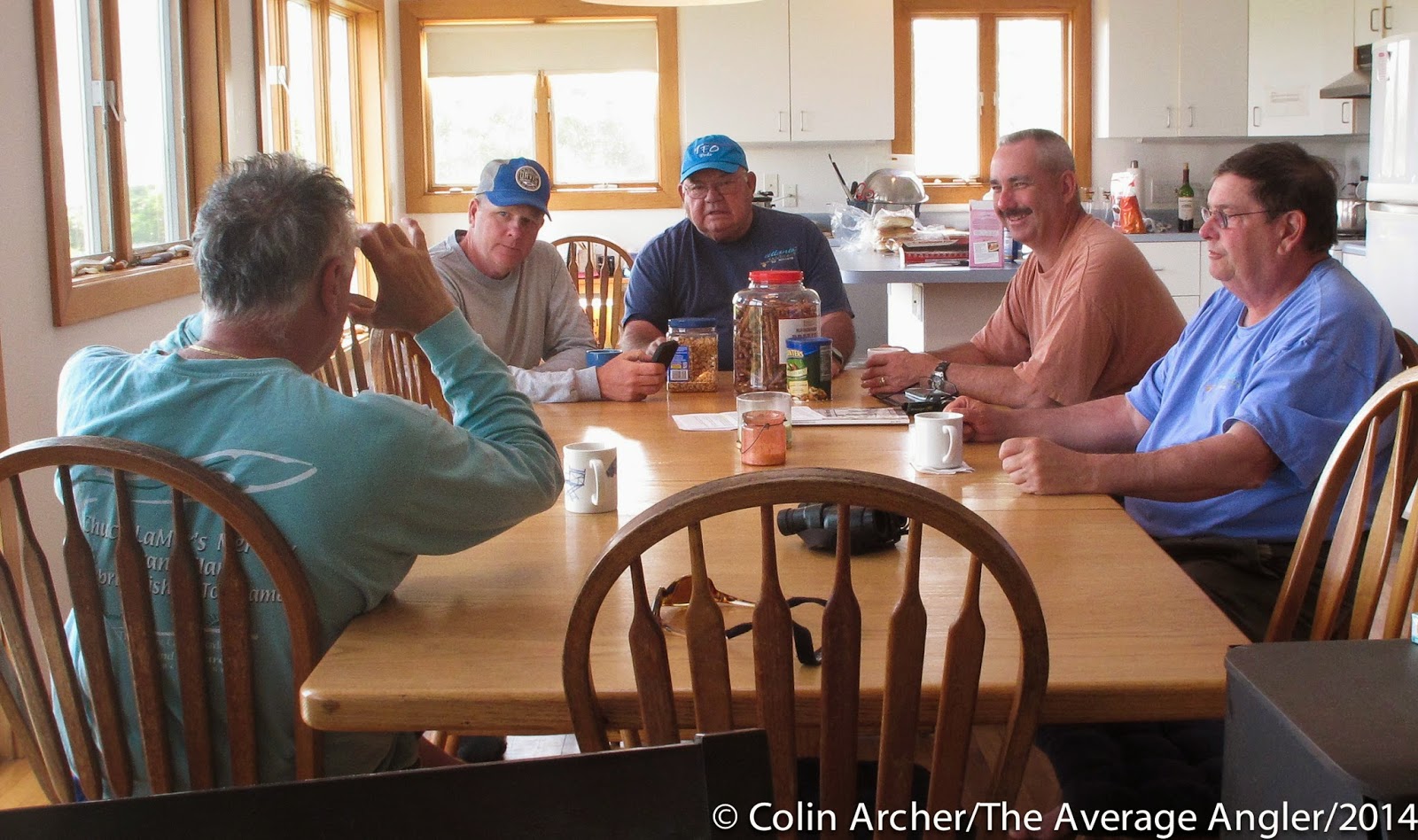 and I was able to get a nice just keeper sized bass sight fishing. On Monday the conditions got better and this time I saw over 30 fish, had a bunch of follows and refusals, and the below fish I got on tape...well most of it. One thing about fishing and video.....it records, and records, and records.......and then you have to upload and edit it.........so........every now and then I stop it to save some battery and memory, and that's when one came in followed and ate my fly....

After I was able to enjoy a good solid fews hours of sight fishing the wind switched so I bolted over to Dogfish Bar where Joe had taken up a prime spot and was able to see a few and grab one as it went by. That night we would all head back out to Lobsterville where the fishing was slow, but the sunset was beautiful. 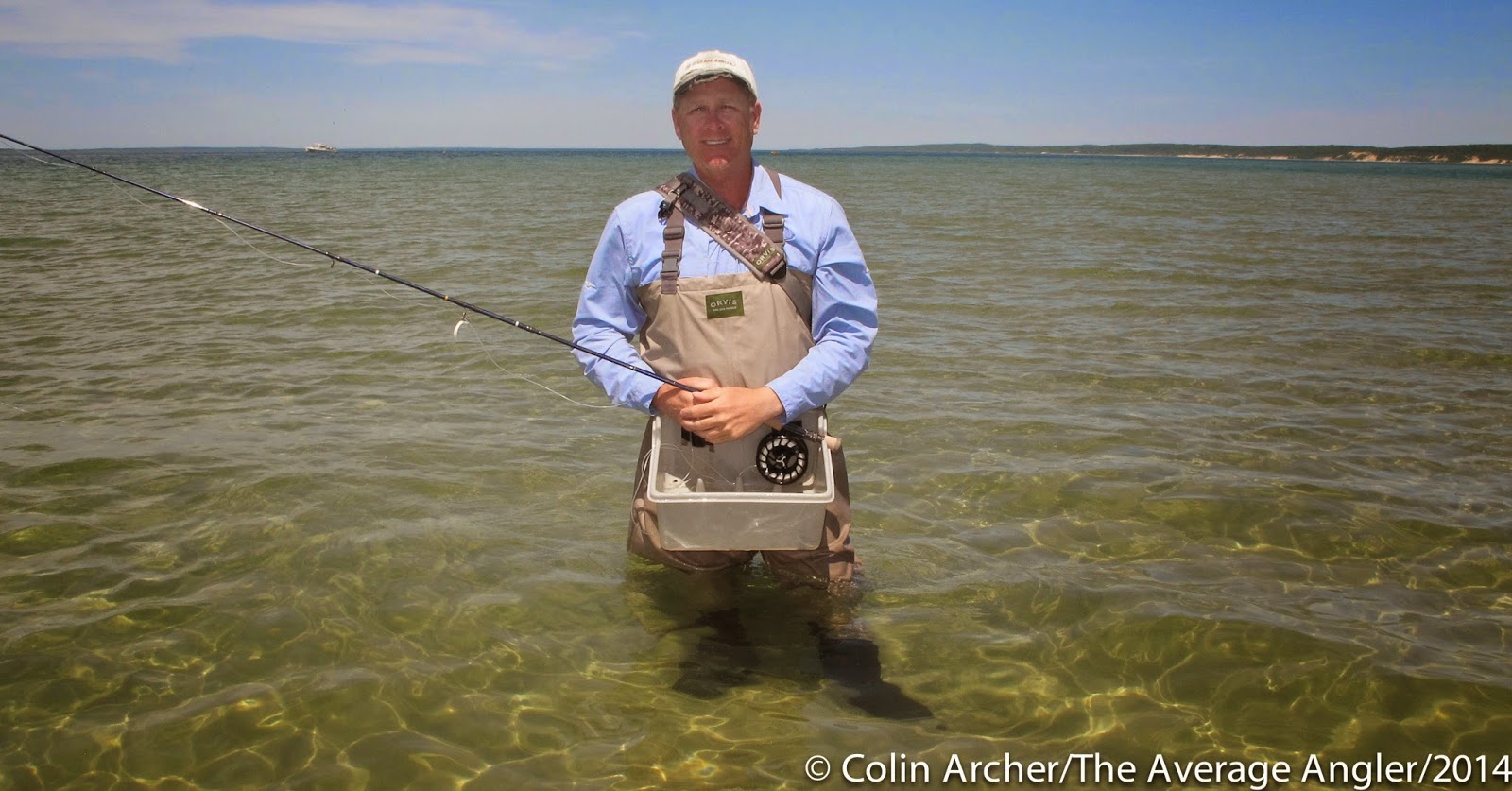 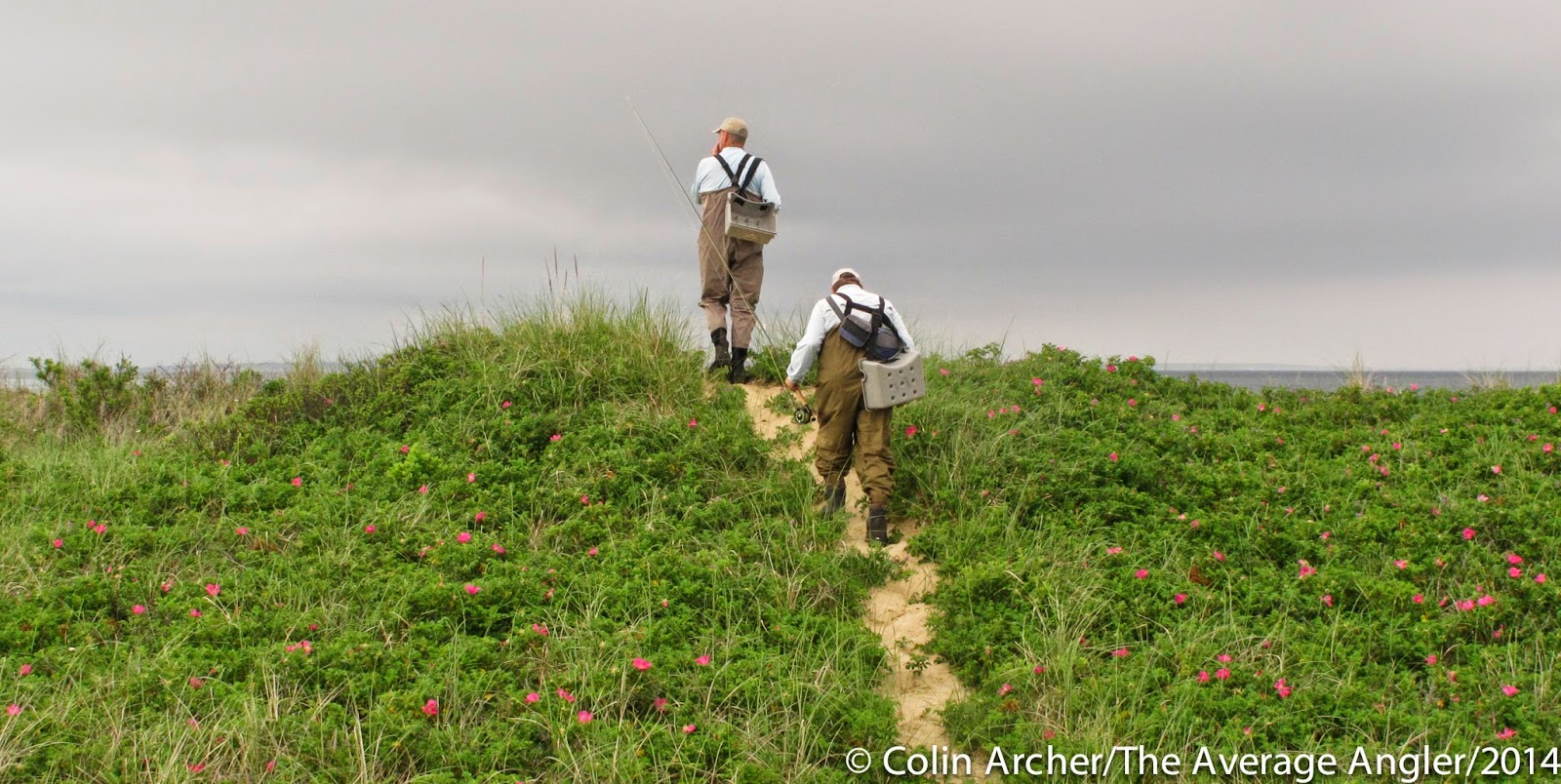 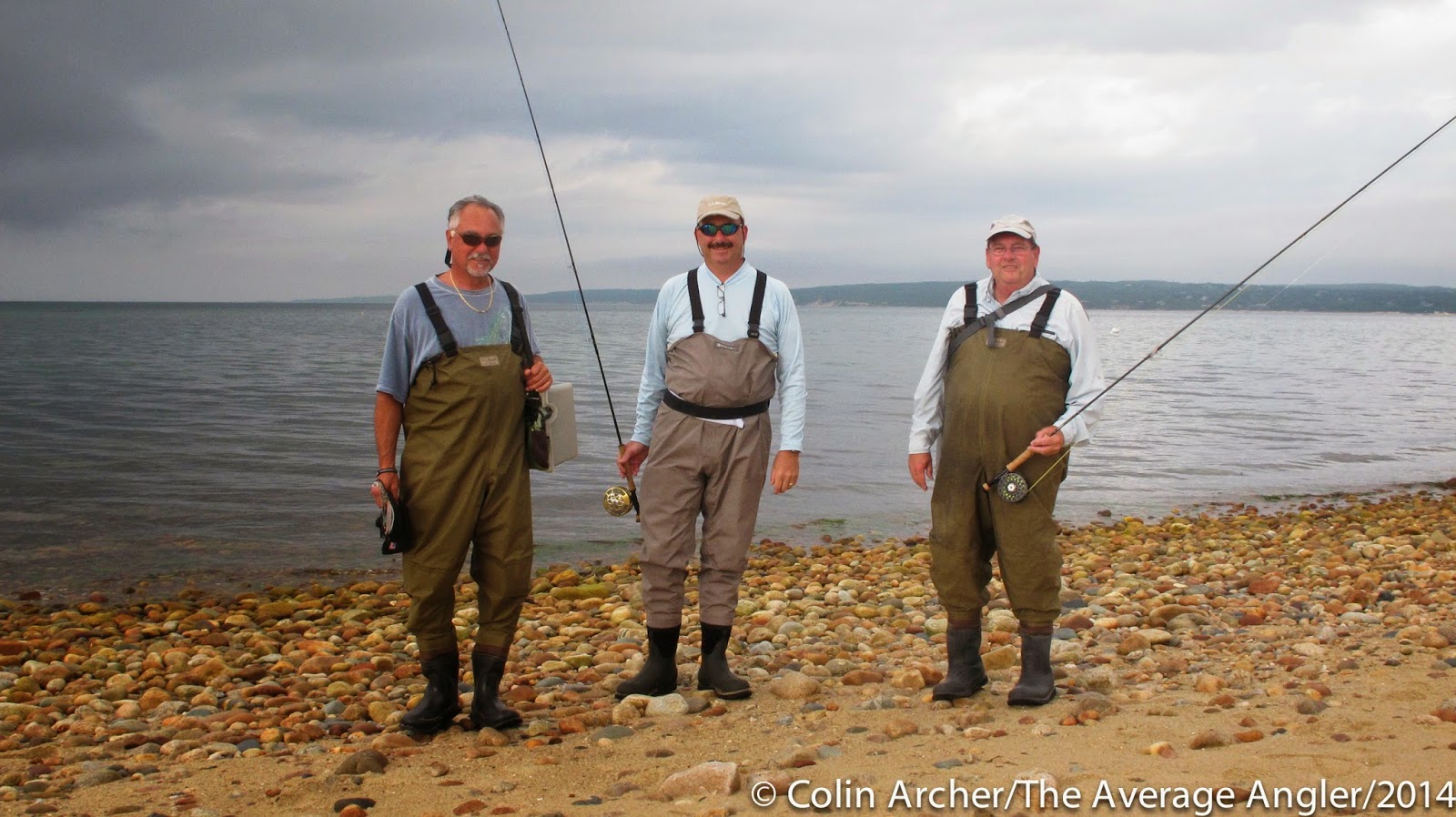 One night I decided to fish a place called the "Brickyard" which reminded me of Montauk a bit as I swam my way out to and attempted, and finally succeeded, to perch myself up on a rock and cast...which produced nothing. After that I stopped by the Home Port Restaurant and had a lobster dinner for one.....kind of felt like a loser but it was a good meal. 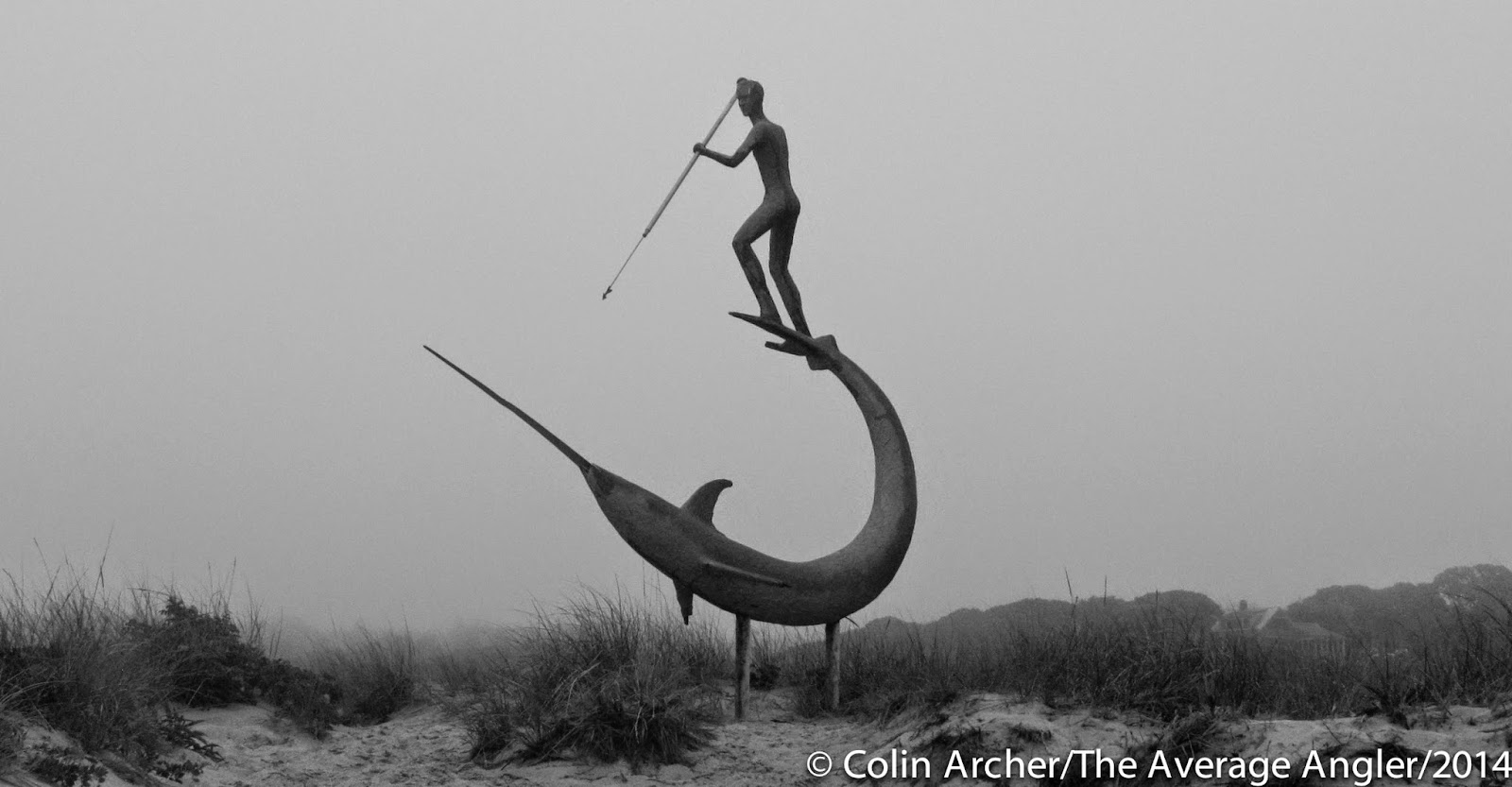 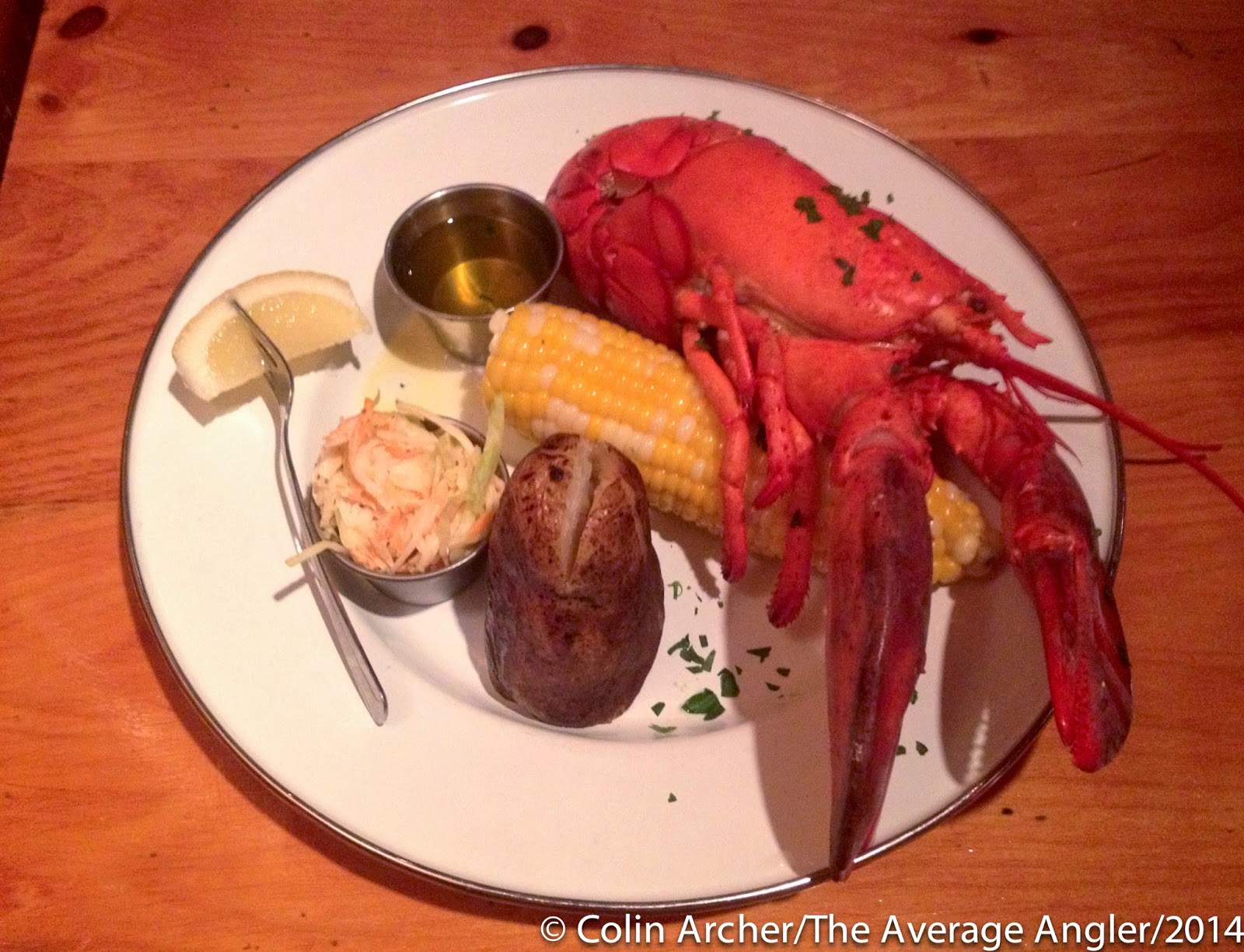 Okay, it's now 11pm and I'm losing my mind trying to remember how each day went.....forget it.
Below is a pic of the sedge bank and channel that we found so productive over the fews days we were there. Below that is just some proof that we did manage to catch some nice fish in difficult conditions. 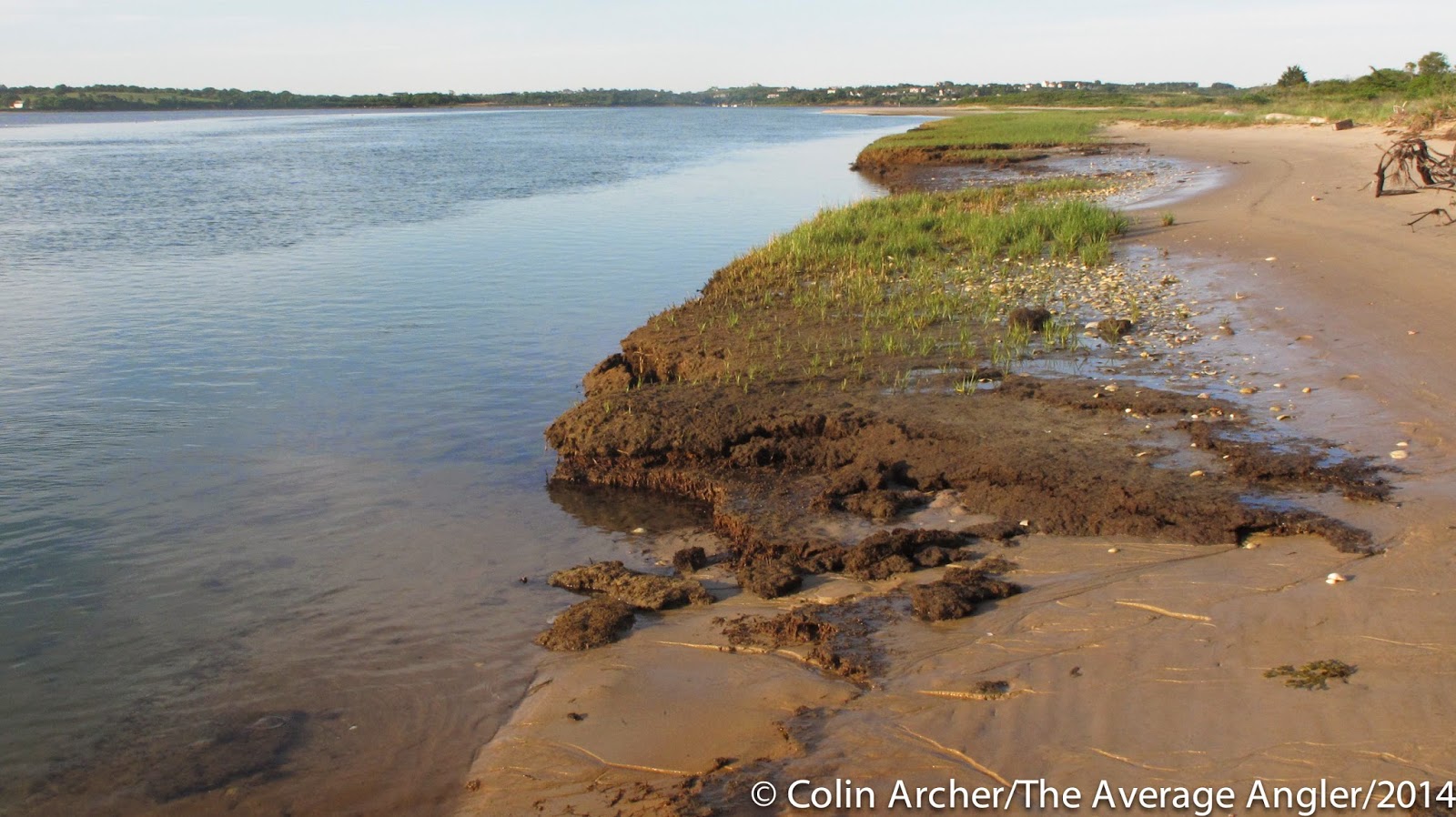 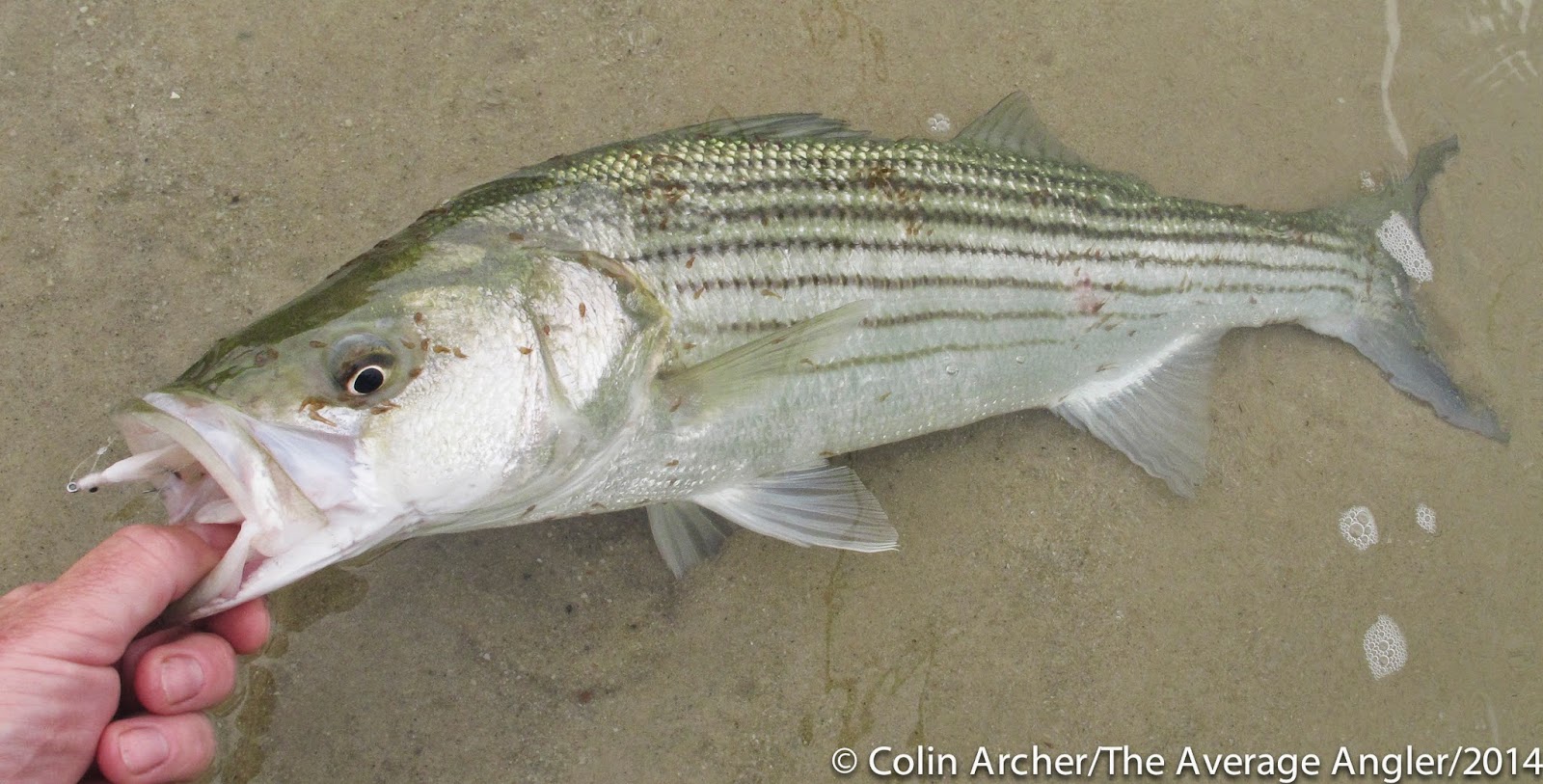 People were asking if we had sand eels around while we were fishing. These aren't your fall Jersey sand eels...these are clouds of micro eels......I mean micro....as in the picture below.

So in the end it was a great trip with great guys. I got to watch some great fly tyers at work, hear some great stories, listen to the guys as they taught me how to fish the different areas of the Vineyard, and just eat and drink and laugh more than I should have. We all caught fish which was a bonus. The cleanup went good on our last night and we were out the door before 5 am this morning heading to the ferry. Joe had said we would be home by 3...but he moved that up since we were able to get on an earlier ferry. It was all good........and then...... 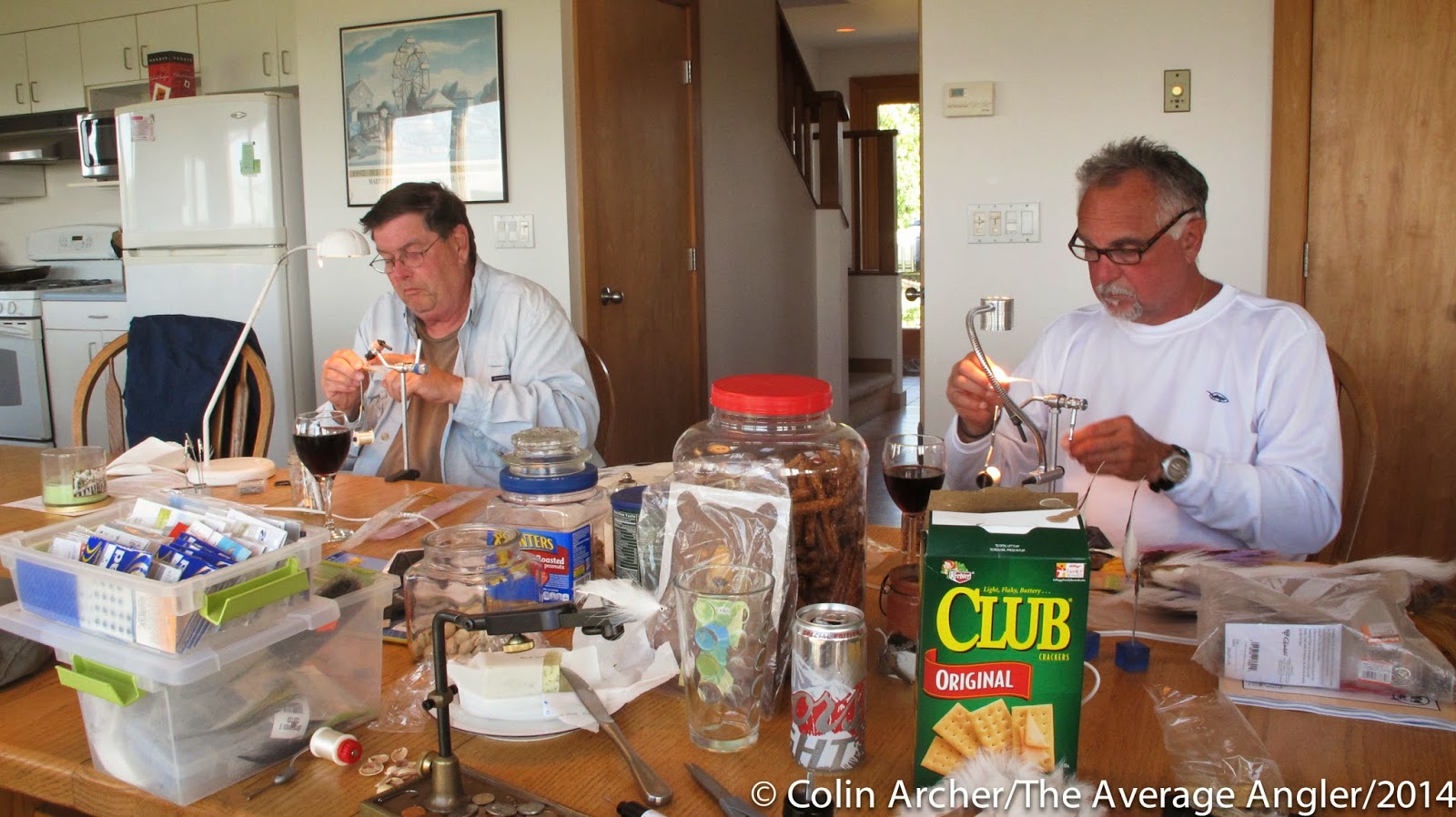 .....I had briefly fallen asleep and was awoke to Joe saying something was wrong and the truck was vibrating. He lost power steering, some electrical, and the engine was overheating. This wasn't good. We limped to the next exit and found refuge in the parking lot of a Home Depot. A quick look under the hood and we could see the main belt was shredded.
Joe was ready to call AAA and I said maybe we can find a "mobile mechanic" that will come and do the repair on the spot. You know, they're everywhere???, hey, it was worth a shot. I went down the street and found a truck auto parts store and went in. I found Kevin...who would become out saviour. He couldn't find anyone to do the repairs on site within a timely manner so he said drive it here and I'll see what I can do.

Well, here was the story, we needed a belt and tensioner???. Kevin was great getting us tools and getting us going. Now, Joe and I have no mechanical experience at all. But, somehow, with Kevin going back and forth between inside and out and Joe's mechanic on the phone we were able to replace the belt and the tensioner and get back on the road within two hours. I still don't know how we did it. 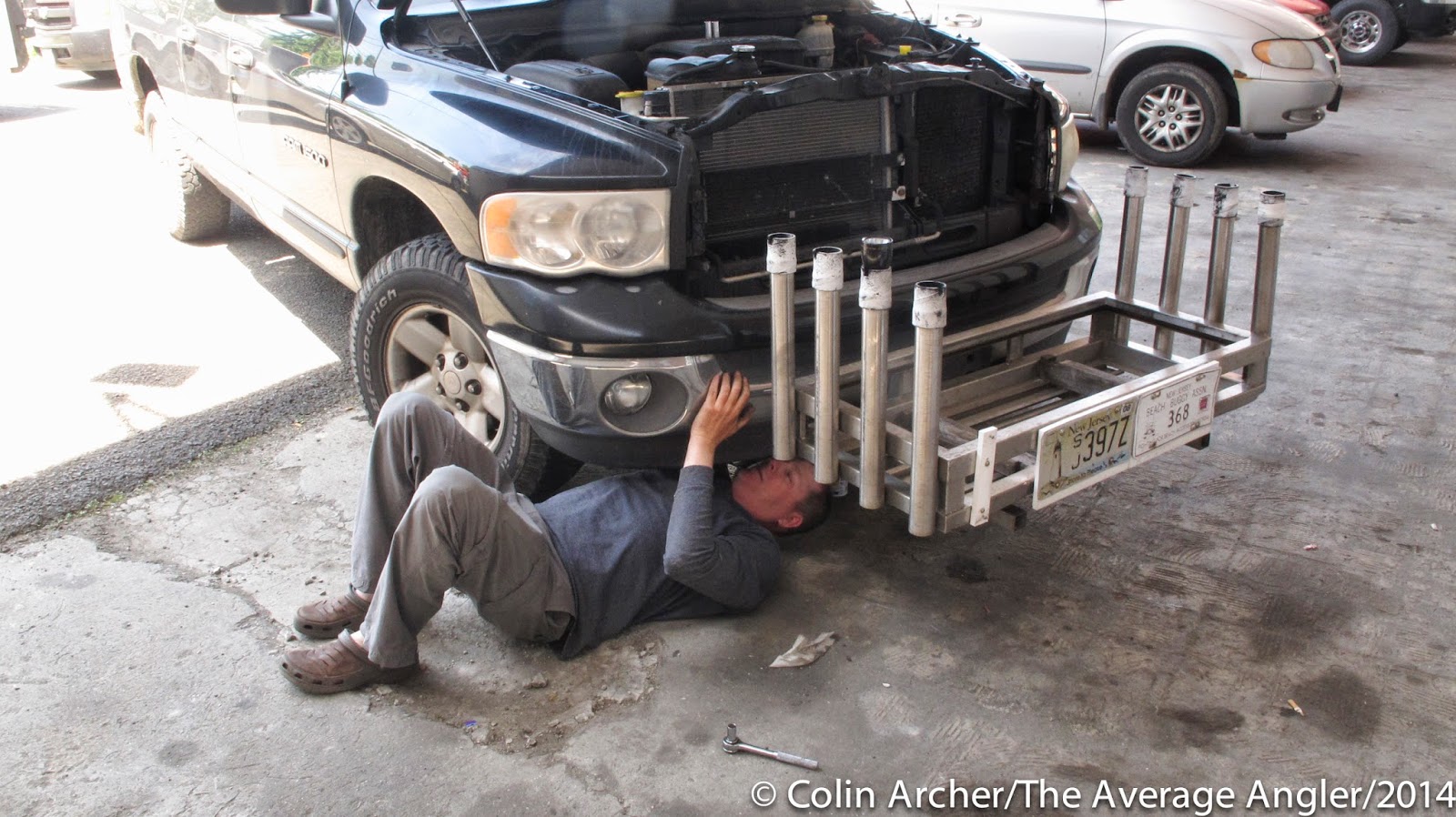 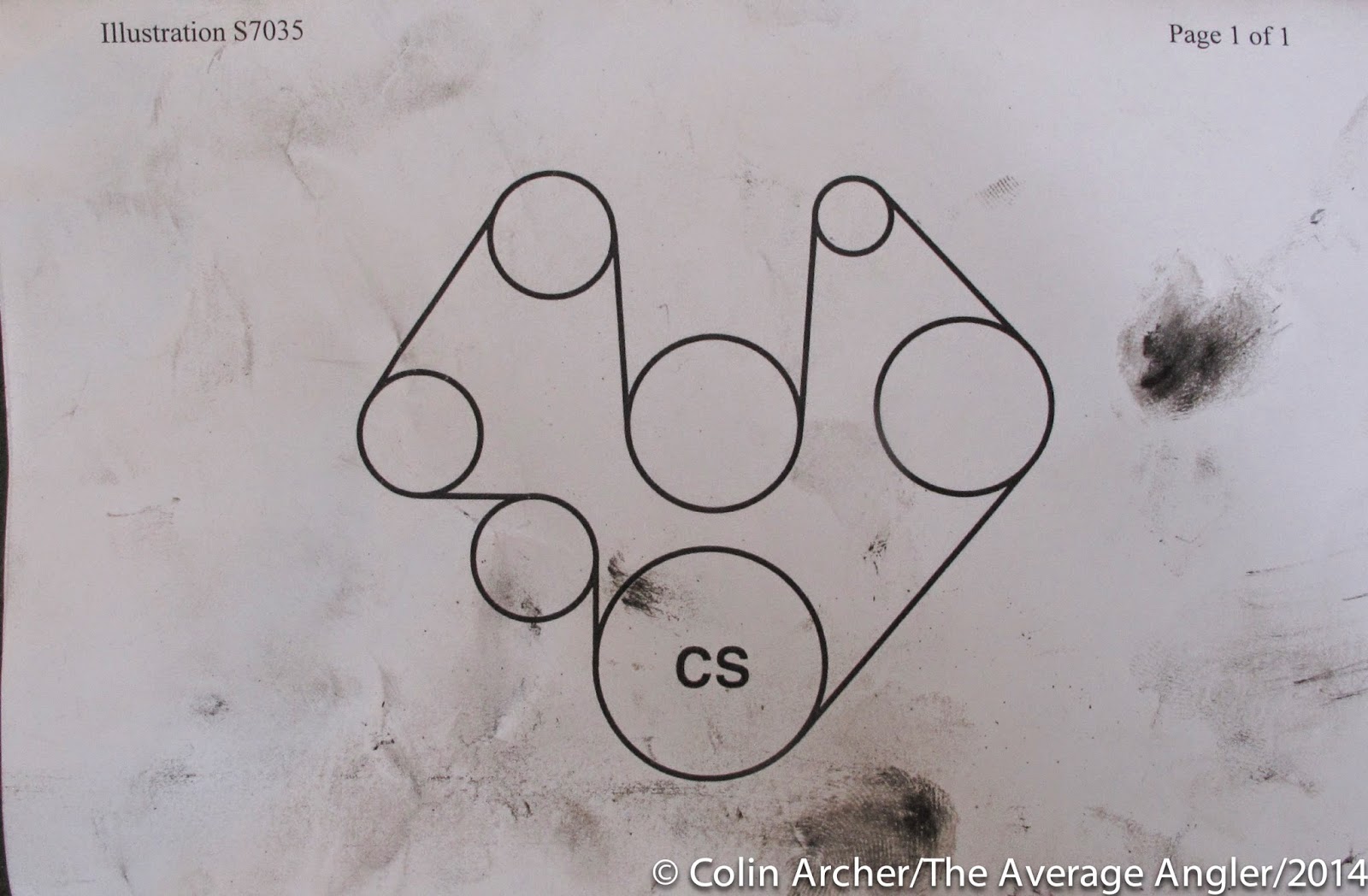 At one point Kevin came out with the belt schematic.....and Joe and I laughed like we knew what it meant. In the end we figured it out and made the repairs and were on the road and I was home at 318 pm, only 18 minutes past Joe's original ETA.

Back at it tomorrow along the Jersey Shore....with morning and afternoon charters....hopefully sight fishing.....for big blitzing bass!!!

Posted by The Average Angler at 11:13 PM