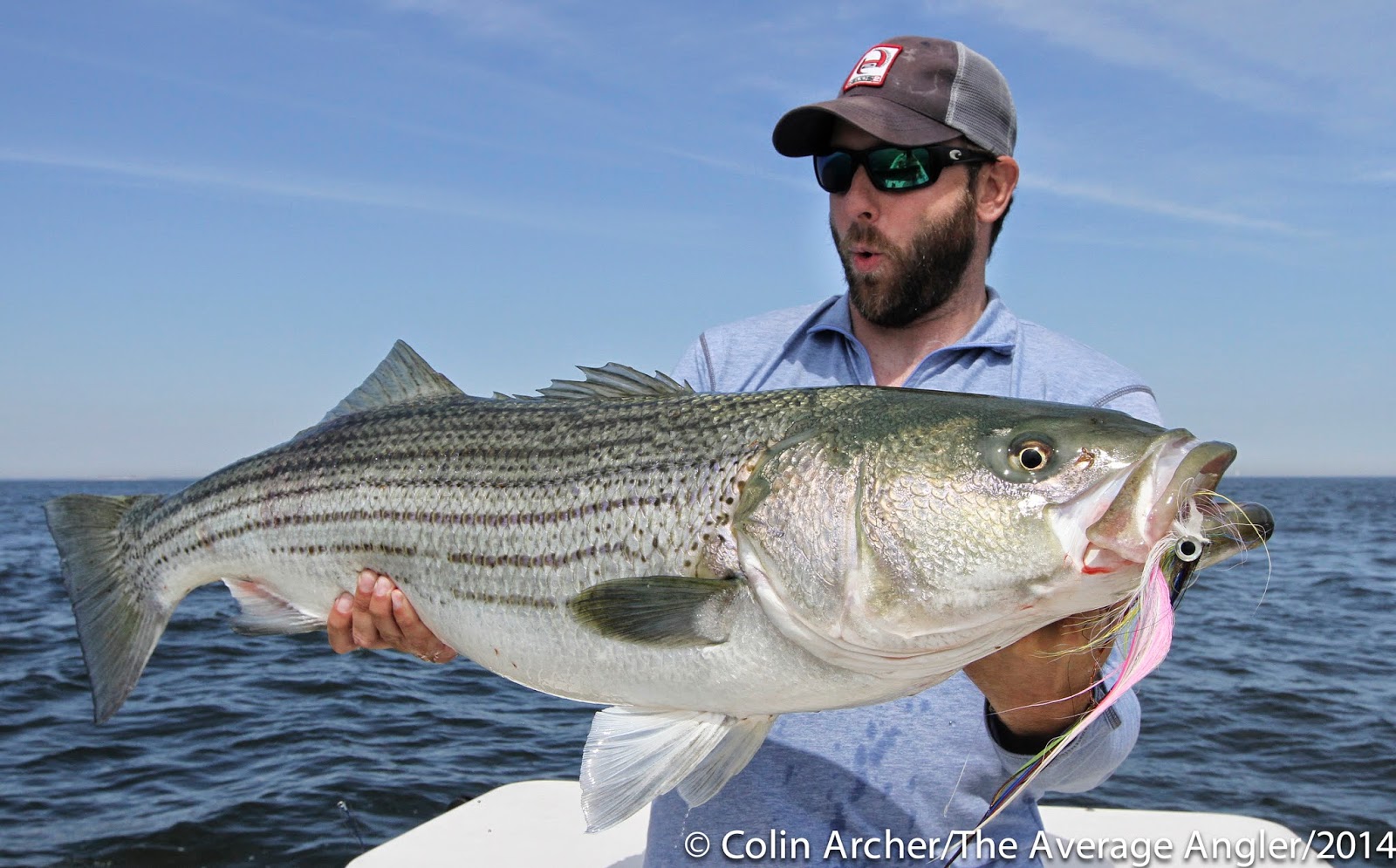 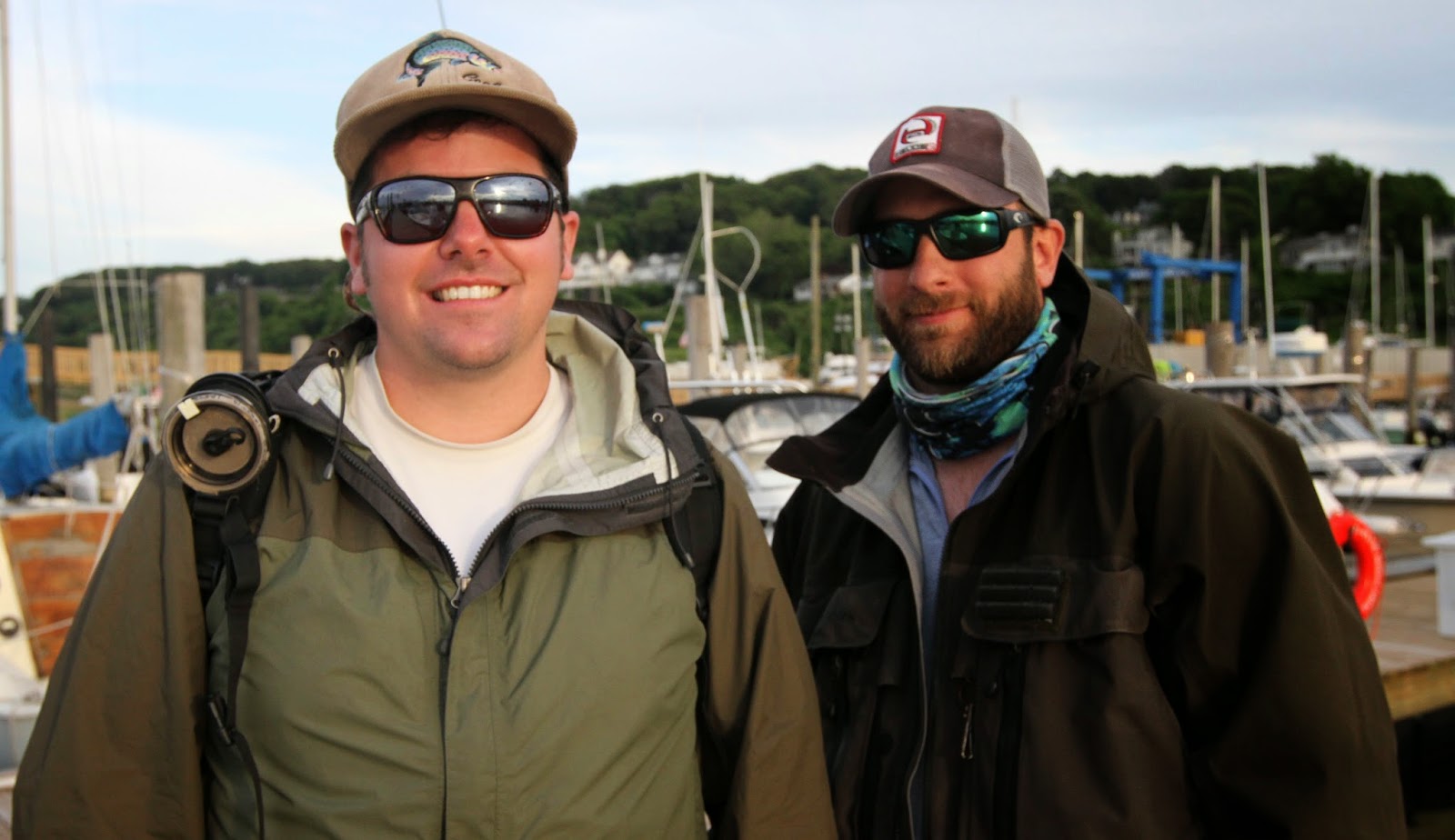 I have to say there's nothing like watching 30's and 40's blowing up on bunker.....and there's like it when there's only two boats around, and the other boat is skippered by a friend. This afternoon I had Orvis Marlton fly fishing manger Andrew and his friend Joe out. We shared the radio and water with Captain Jason Dapra of Blitzbound Charters and his clients Ken and Frank. 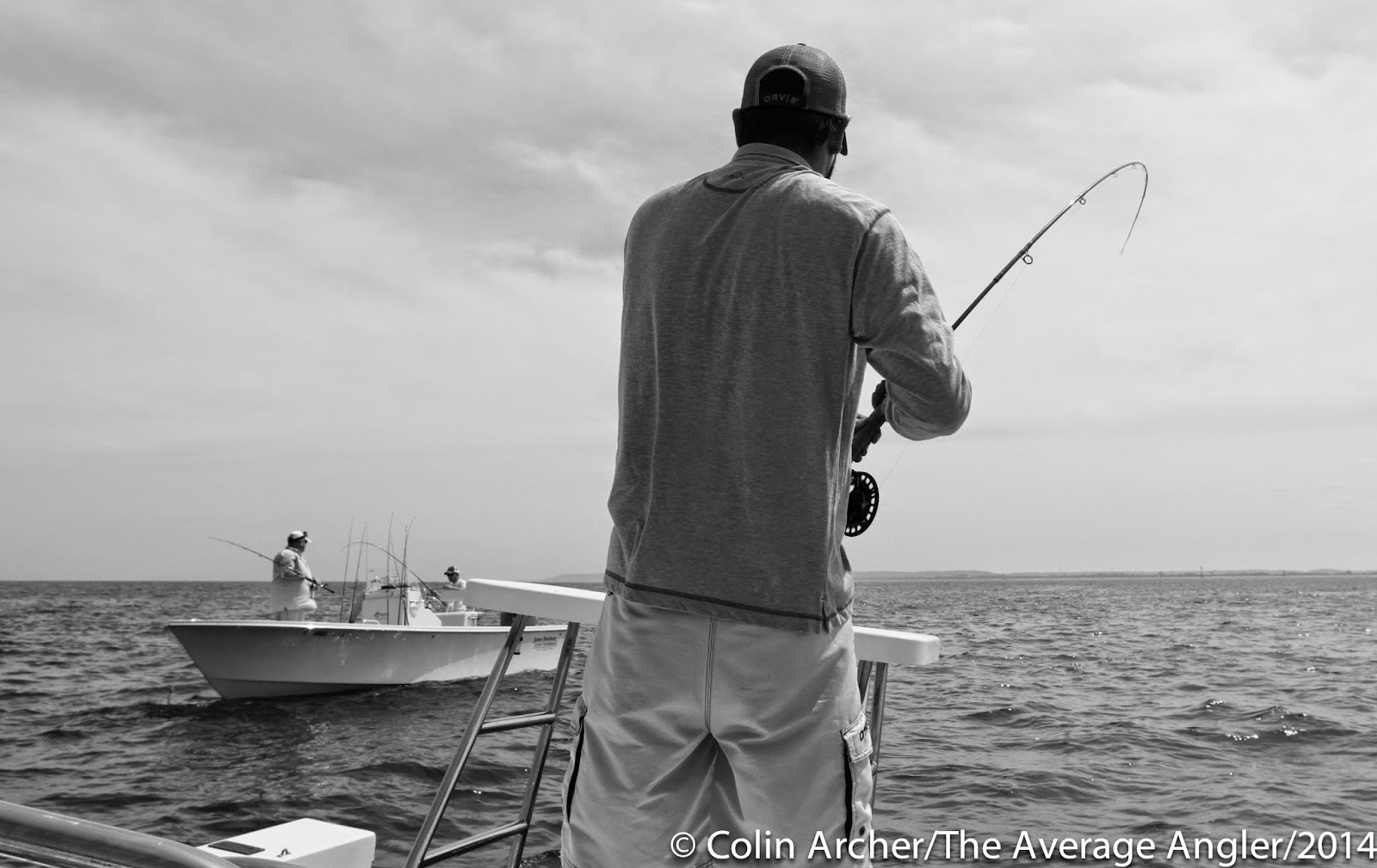 After a quick ride out we found lots of pods of nervous bunker and we started throwing a big bunker fly and a large fly rod popper. Jason and his clients had already boated a few 30 pounders on poppers when they invited us over to a pod of blitzing bass. Andrew went tight with the above big girl as Joe continued popping away. While Andrew fought his fish, Frankie in Jason's boat went tight, and then so did Joe so we doubled up. We landed Andrews fish and turned our attention to Joe who had his own beast deep into his backing.....and then just like on Wicked Tuna....she popped off. 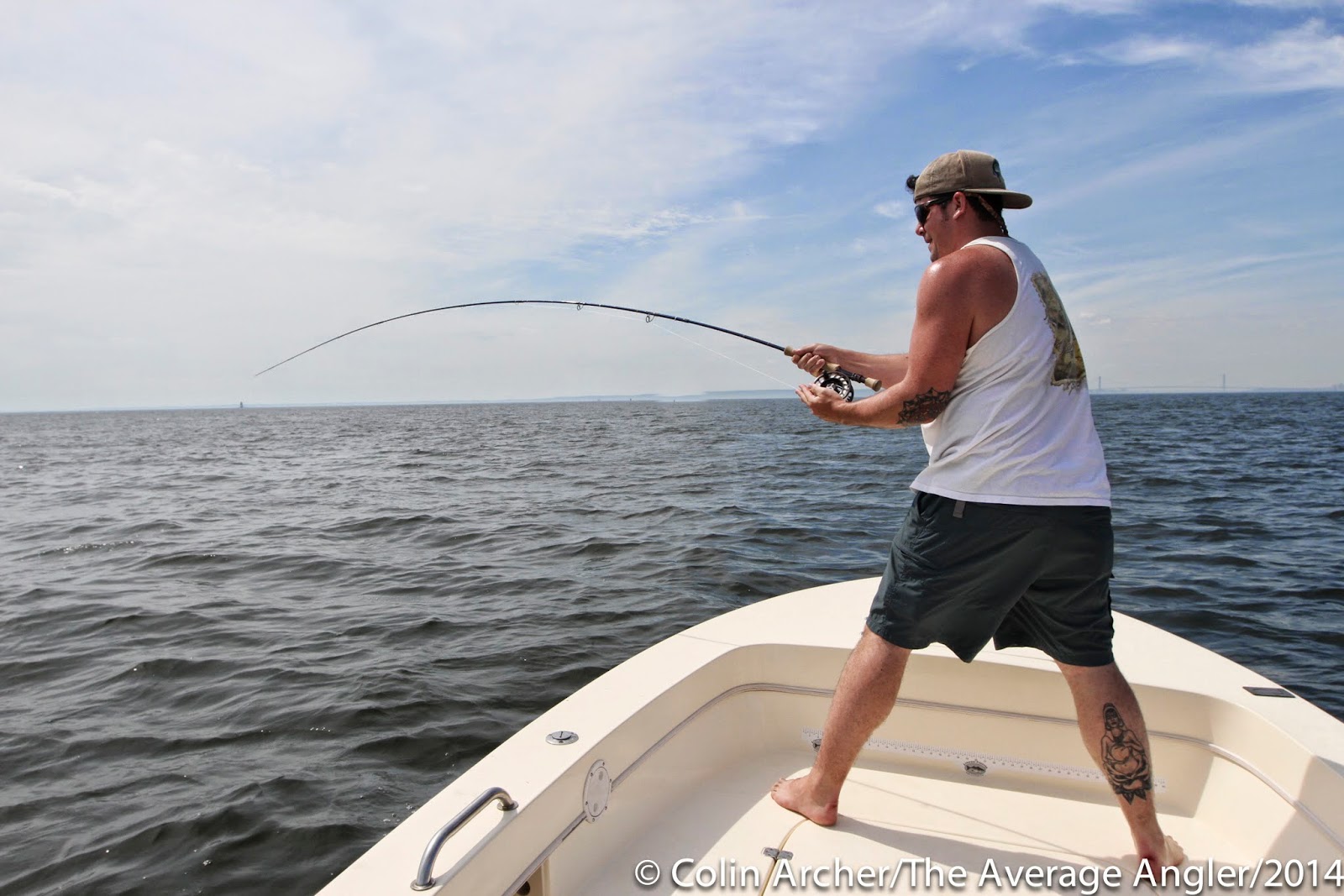 The bite didn't last long on top so it was time to go hunting. We took a long ride as the SE wind and chop picked up. We found bunker pods with nothing on them so we kept driving and stopped to fish a fishy spot. In the distance I could see a ton of birds working over bluefish running through the bunker 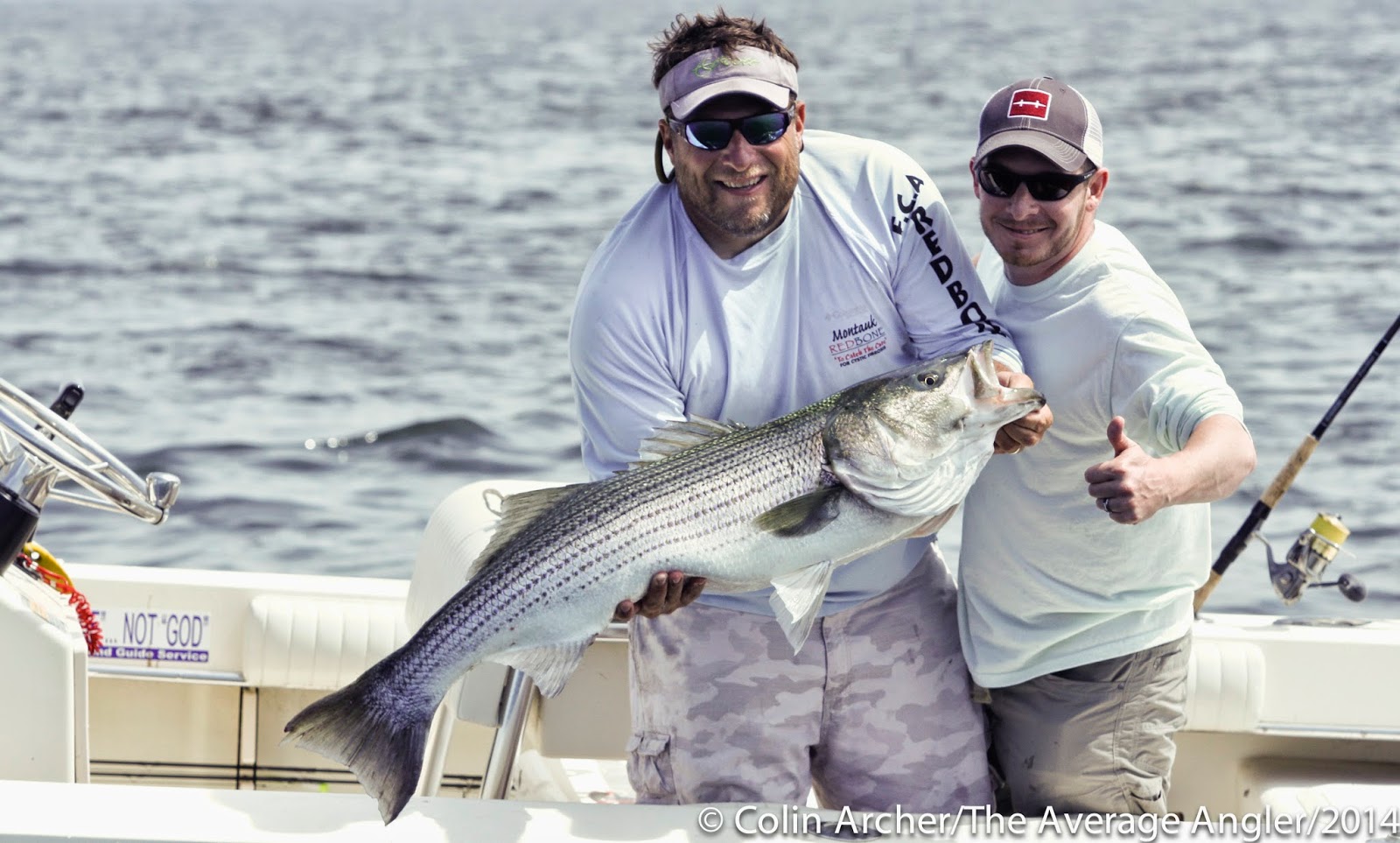 pods so we motored over. In the distance I could see Jason and Captain Derek on the Fisher Price. Little did I know that moments before Jason had called out on the radio looking for me and Derek to come over and help out in a hurry......

I got over after it was over and I talked with Jason about including this in this post.

Jason was fishing near a channel that is used by big, I mean big, cargo and tanker ships. He was in a good spot and saw an approaching 900 foot boat in the distance. ( In the below photo you can see it off in the distance) He took action and decided to move so as to not drift near the ship, or its wake. But his boat wouldn't start, not once, not twice.....not at all. They were drifting closer to the channel and the ship was closing in and he decided to drop the anchor in 35 or so feet of water. He said the next time he looked at the screen he was in 70 feet of water...in the channel.

That's when he readied the safety gear and got the lifejackets on and had Ken and Frank primed for what was going to happen. Seeing the course the ship was taking he told them they were going into the water. With the ship less then 100 feet away they jumped in and the ships wakes crashed and lifted Jasons boat....he told me he thought it might have been the last time he saw it, or he thought it might hit them as it got pushed around by the ships wake.

Captain Derek and his mate and sports were on them quickly and got the three on his boat and secured Jasons boat. We rolled in after and at first I wasn't sure what had happened. My heart sunk when I saw Jason's face....and then I saw Ken's face and I knew they had just been through some scary shit. The NYPD, FDNY and Coast Guard responded by sea and by air. Kudos to Derek his crew and everyone on the Fisher Price who were right on them and towed them back to the marina.

I think we all learned something out there today...I know I did. You never know when something bad is going to happen. You need to be prepared. You need to keep a level head and have a plan as Jason did. And you need to have friends, or strangers, out on the water and be ready to jump to when someone needs help. All three of them did it right and are now safe at home with a hell of a story to tell.

I am thankful that everyone is okay, maybe rattled a bit, but okay.

I have to thank my guys Andrew and Joe who were drop dead fine with cutting our trip short so we could escort them in and be available for any help we could be. When I told them that Jason, "He's my boy", they knew exactly what I meant and what I had to do.

Posted by The Average Angler at 2:46 AM