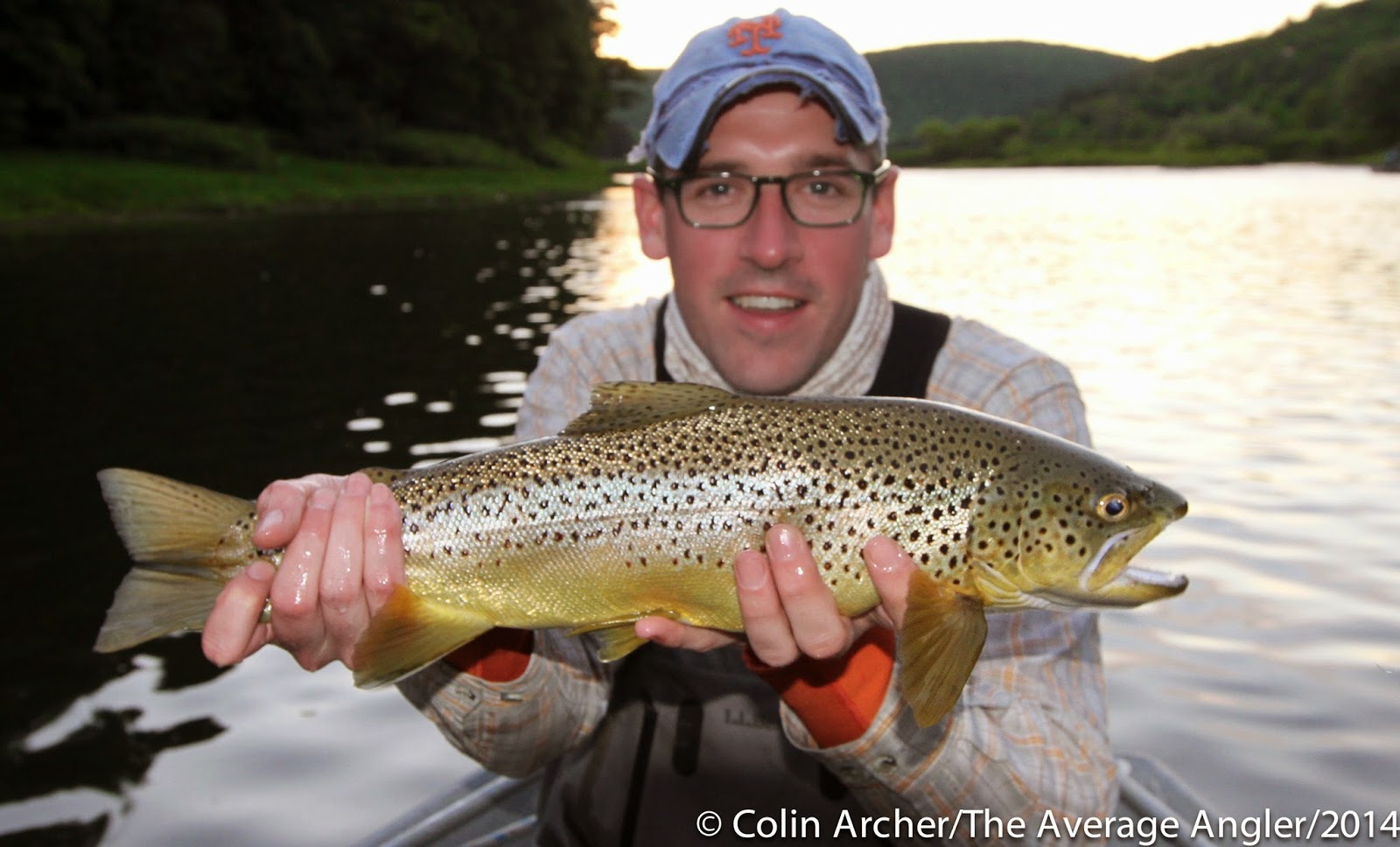 Great day out on the Upper Delaware with Kevin and Mike. Day started out windy and slow, but things picked up. Mike's new to fly fishing and did a great job in sometimes less then perfect conditions, wind, sun, current, and the dark. 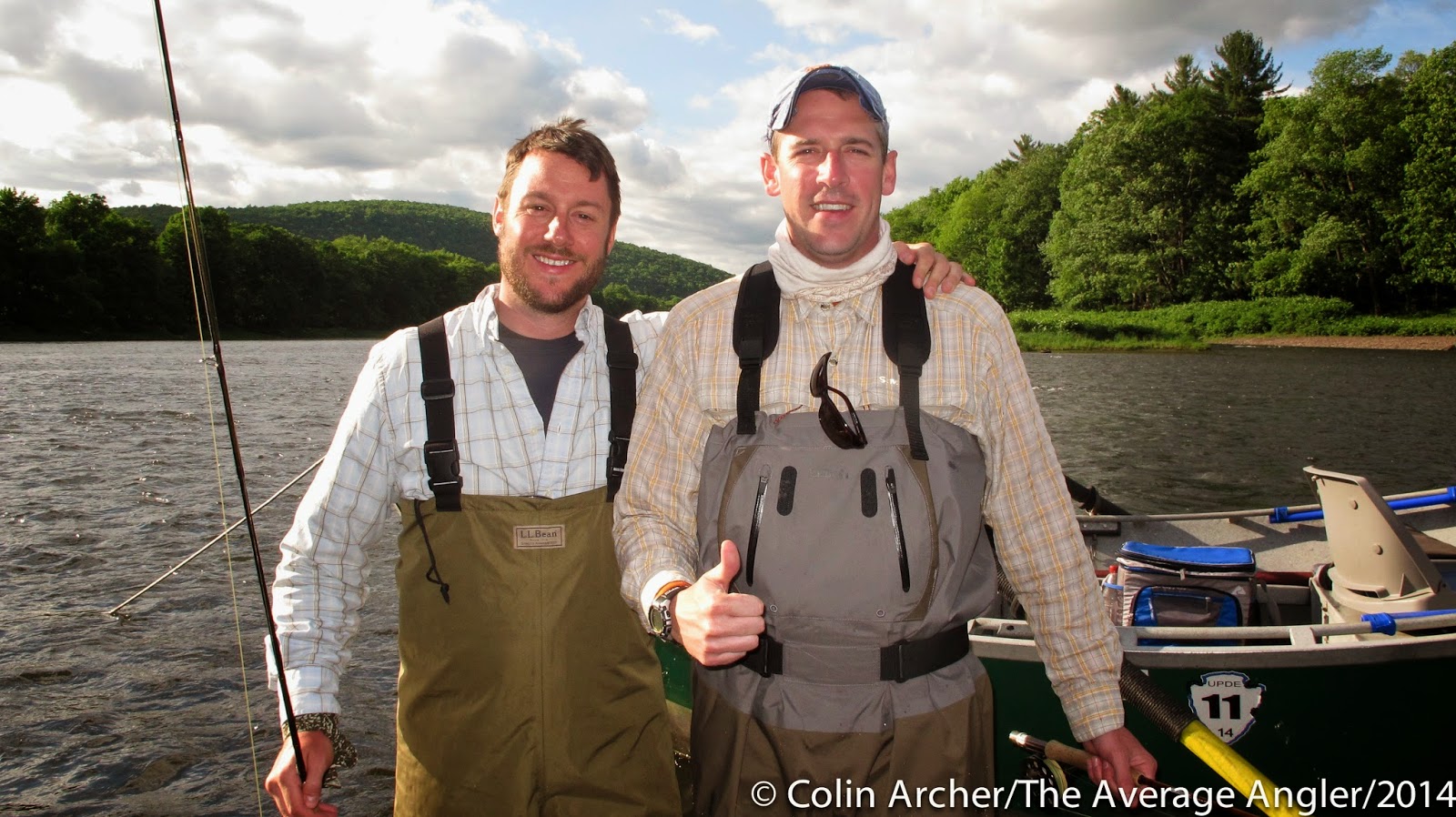 We started out with some early heads and then Mike wanted to get his nymph on. He did a great job  but we couldn't get any to bite, even after several fly and set up changes. Kevin stuck with the dry fly and he wasn't trilled when I gave him a Caddis. He said he never catches anything, never, on caddis. 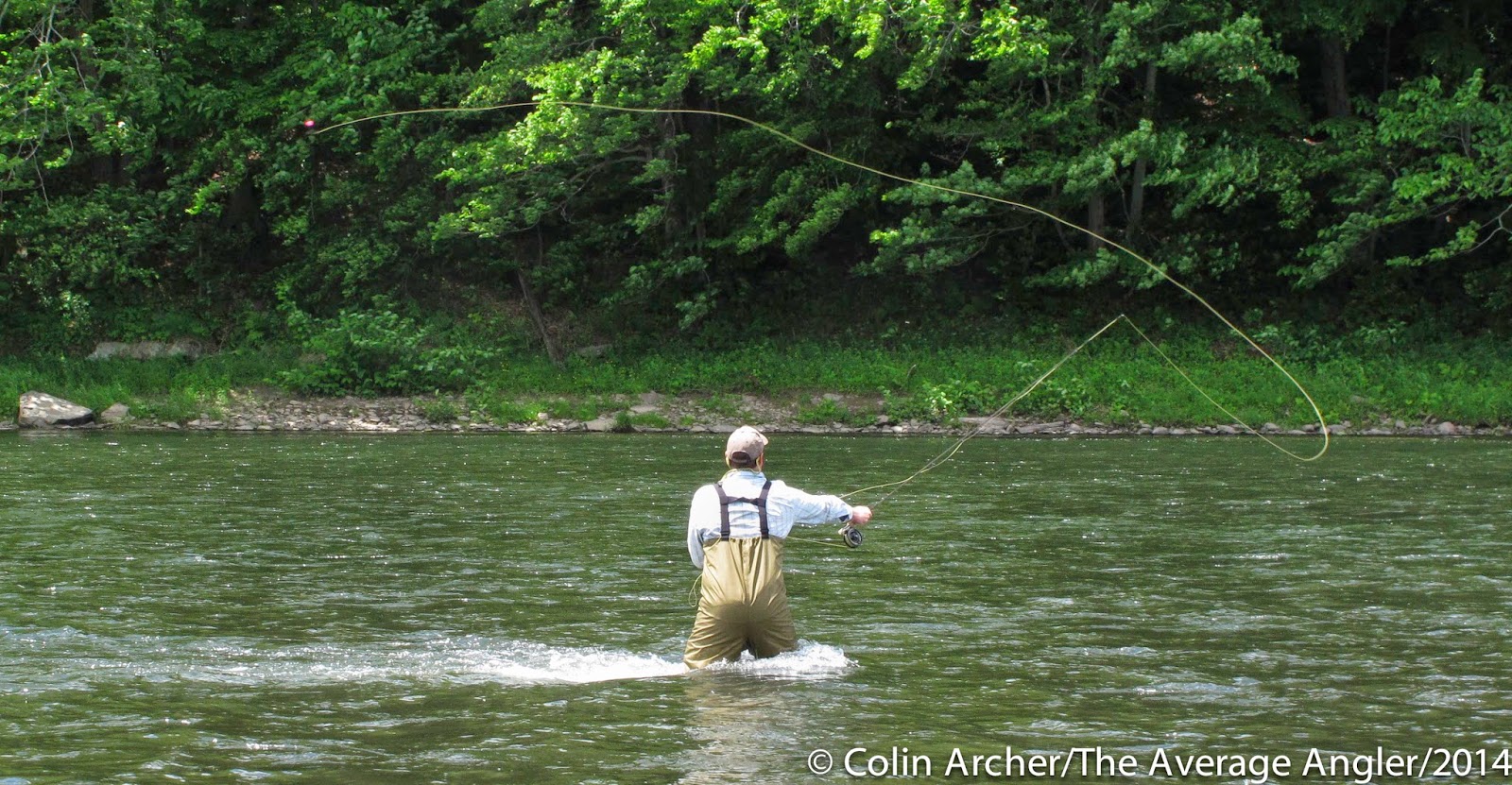 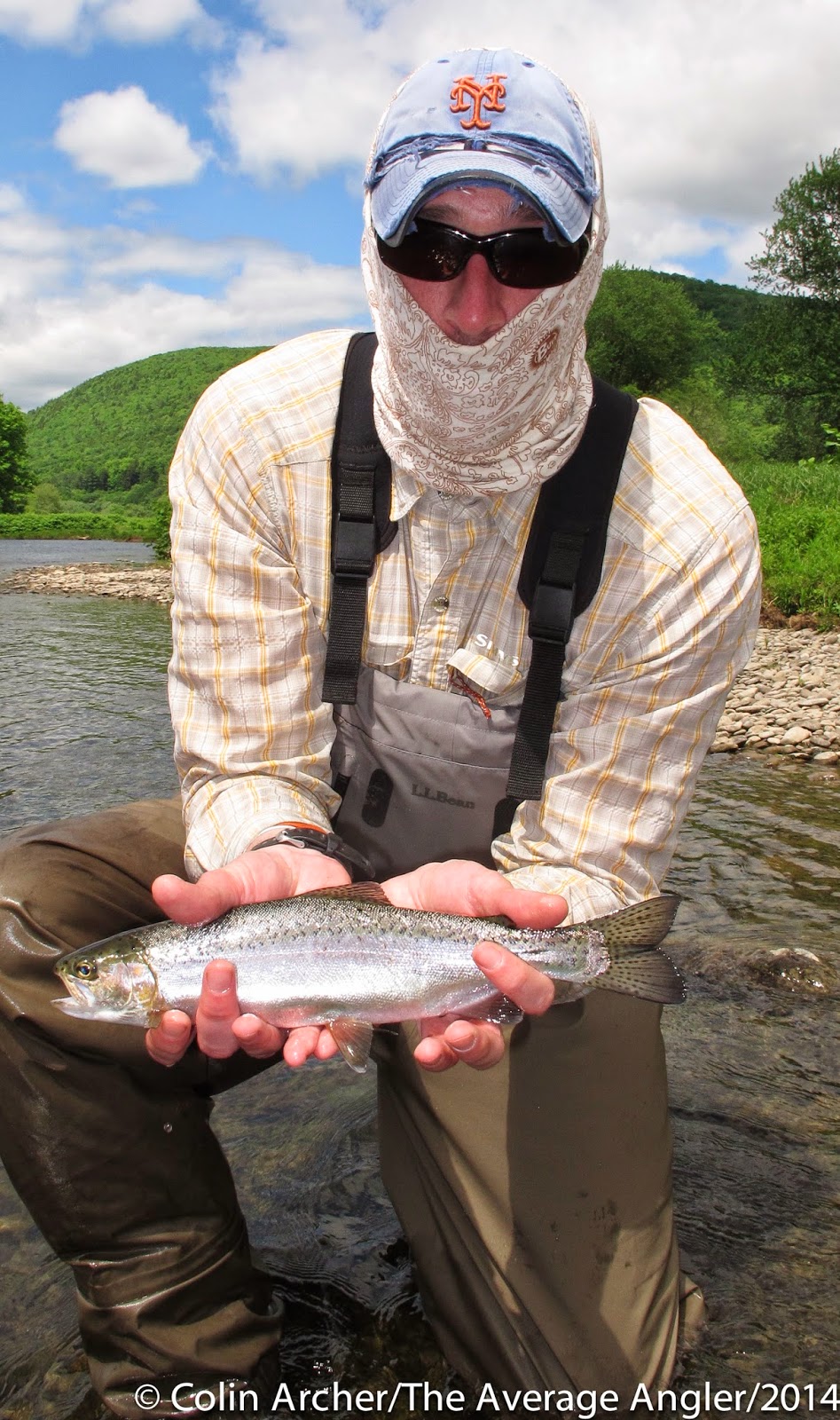 As the sun tucked behind the clouds it things got really good. Saw lots of Sulphurs, some Green Drakes, Coffin Flies, and March Browns. But they wanted the Sulfurs.

Here's where it gets good,

We were anchored up river left and we saw a slob rising on the other bank. Since there was no one around we moved across and set up for Kevin to give it a go. He made some great casts the fished moved as the Sulphurs came down the river. The fish rose, Kevin made a cast.....set the hook, broke it off. It was a nice fish, a really nice fish, he was sick over it. What can you do...... 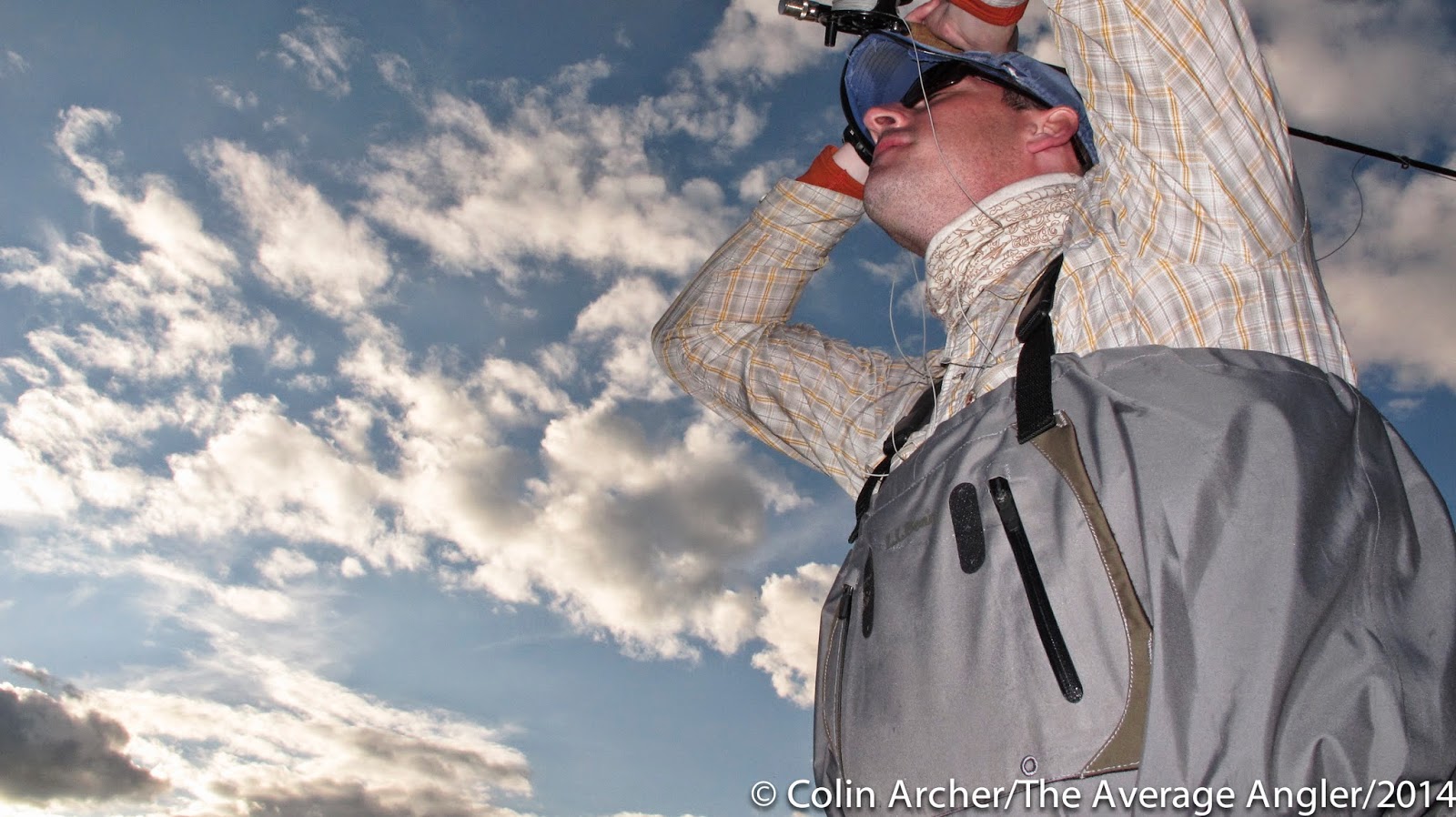 So with Kevin bummed we rowed back upstream and went looking for more heads, this time for Mike. We found a few and worked hard to get a fly and a good drift over one but we had no takers.

So it had 45 minutes since we broke off the other big fish and Kevin had settled a bit. As the fish rose, I have to say, I took some liberties in busting his chops a bit. So, after a while of watching and a few nice casts from Kevin......the fish rose, Kevin casts, the fish eats, he sets the hook, the fish comes to the net. As I put the forceps in his mouth on the roof of its mouth.....was Kevins previous fly. Broke and off and all, this fish wanted to eat. It was a great ending to that particular trout story. We fished into dark throwing Coffin Flies to bigger rising fish. Mike pricked one in the moonlight while Kevin and I had our fingers crossed for him to bring a fish to hand.

It was a great with great guys....and a great "the fish that DIDN'T get away story" 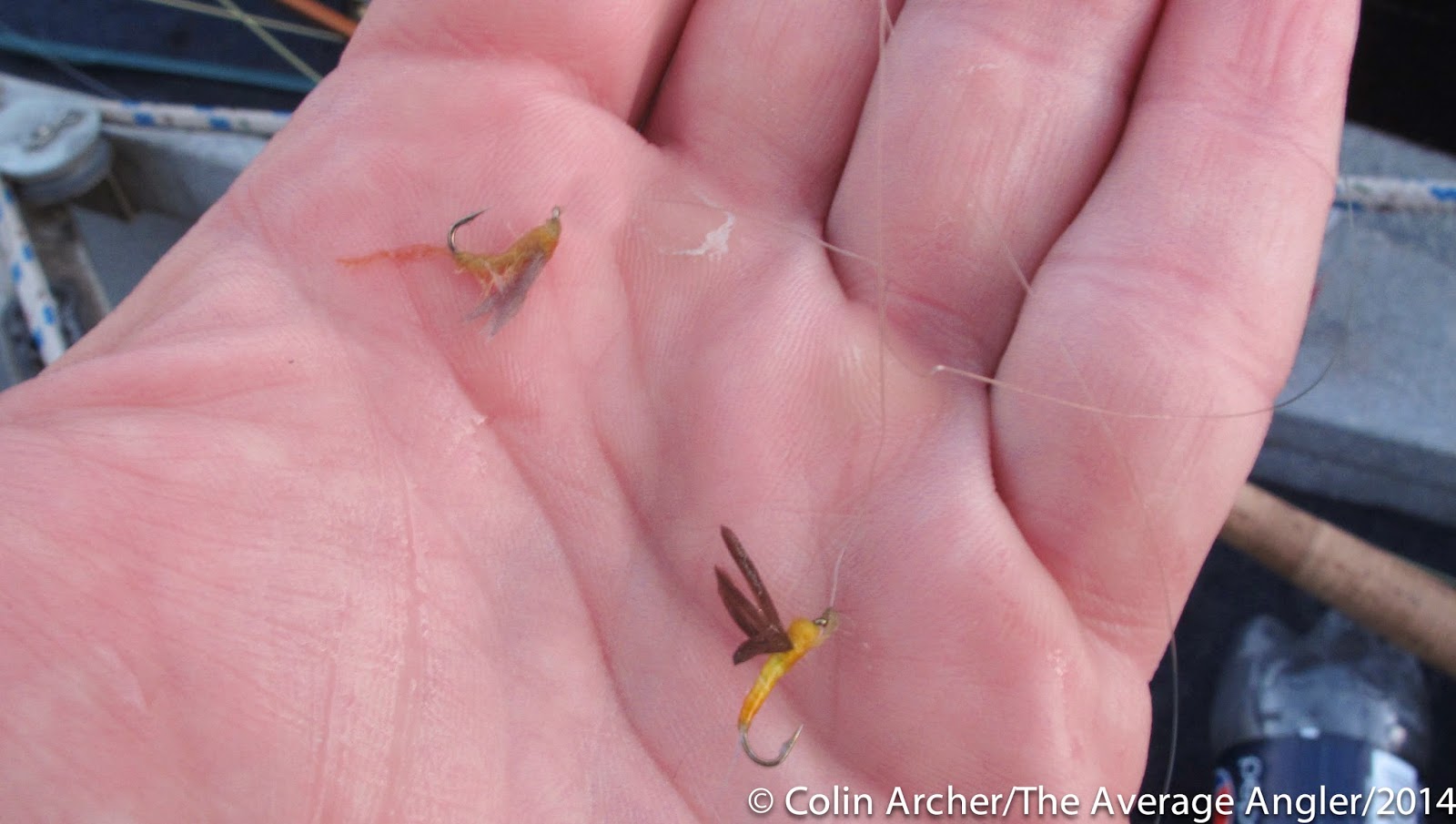 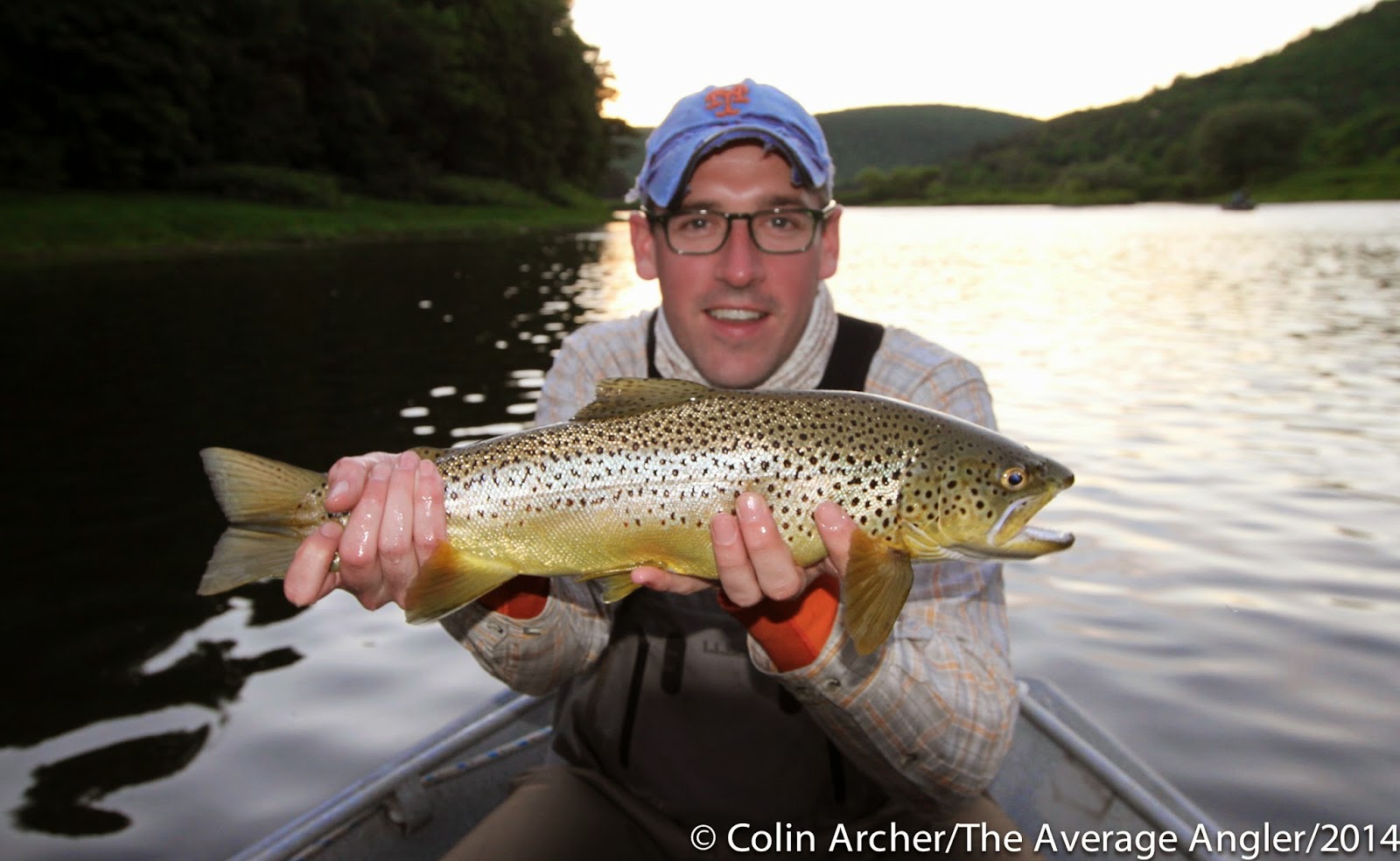 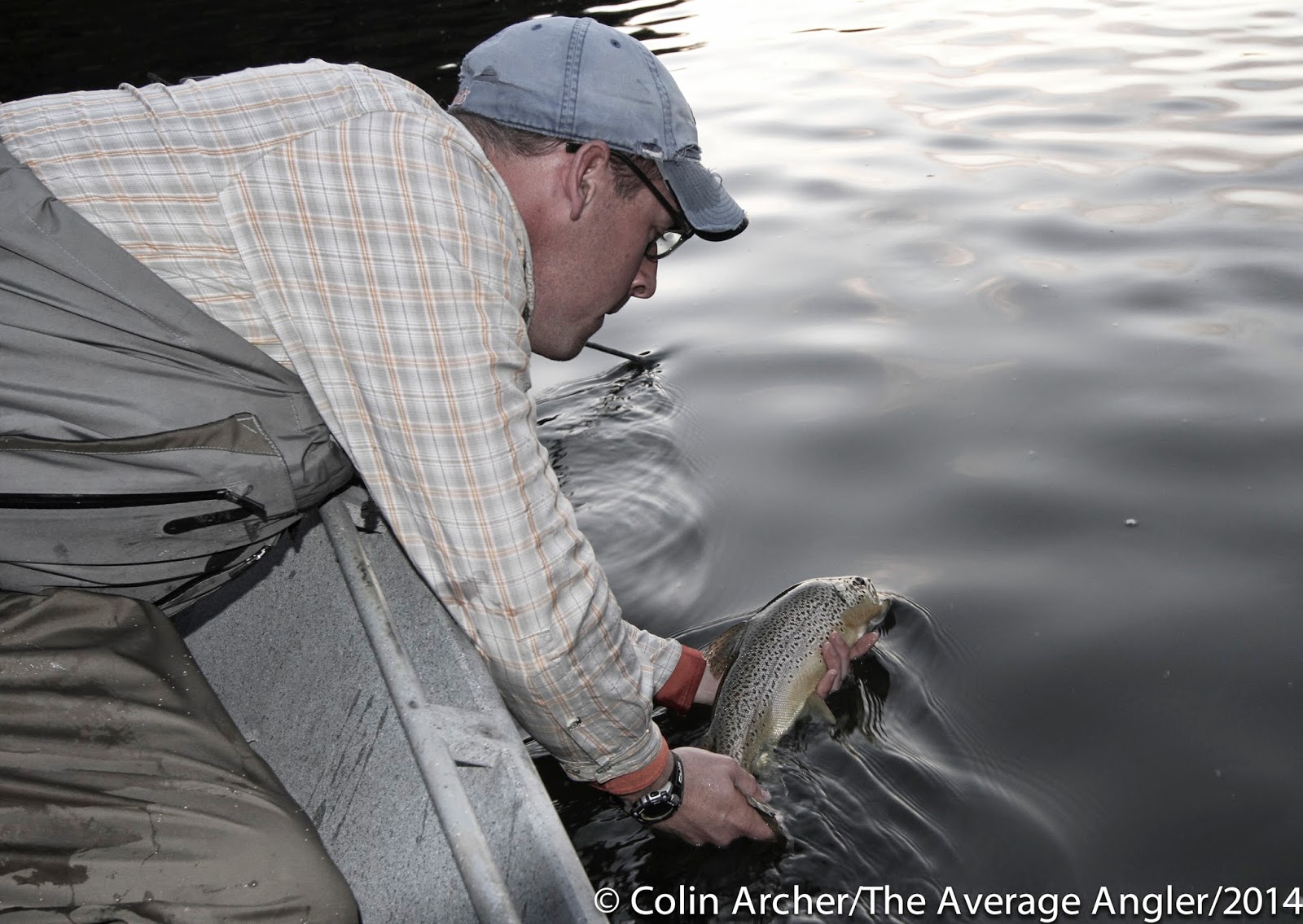 Thursday night Bunky and I got a chance to fish the Grenn Drake/ Coffin Fly "hatch" down on the Beaverkill. It was a great insect show that started around 630 and lasted till dark. I managed a couple on swinging March Brown soft hackles then a trio on the Coffin Fly, one which was 19. It was a great night before a float trip to get you in the mood. 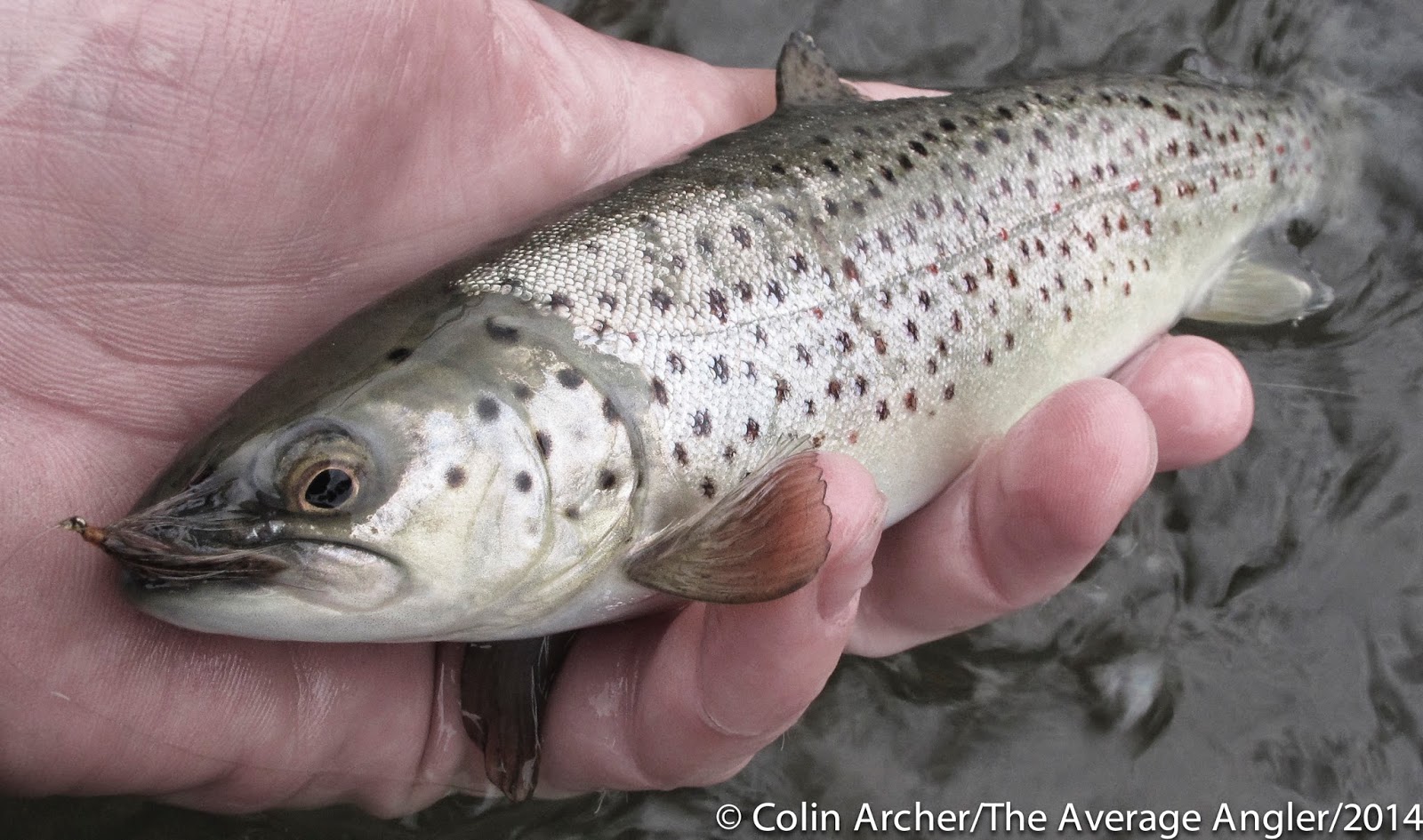 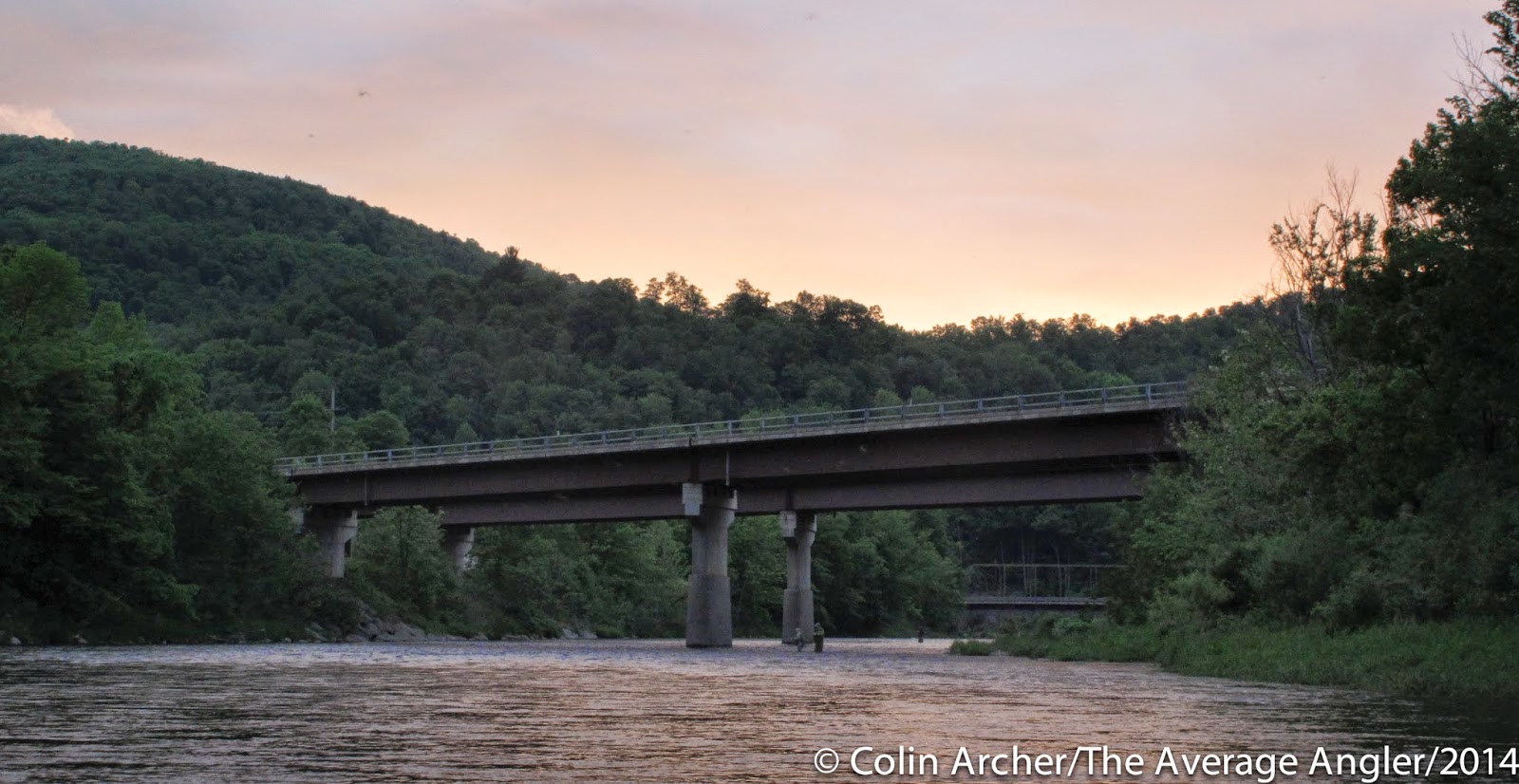 Posted by The Average Angler at 12:03 PM