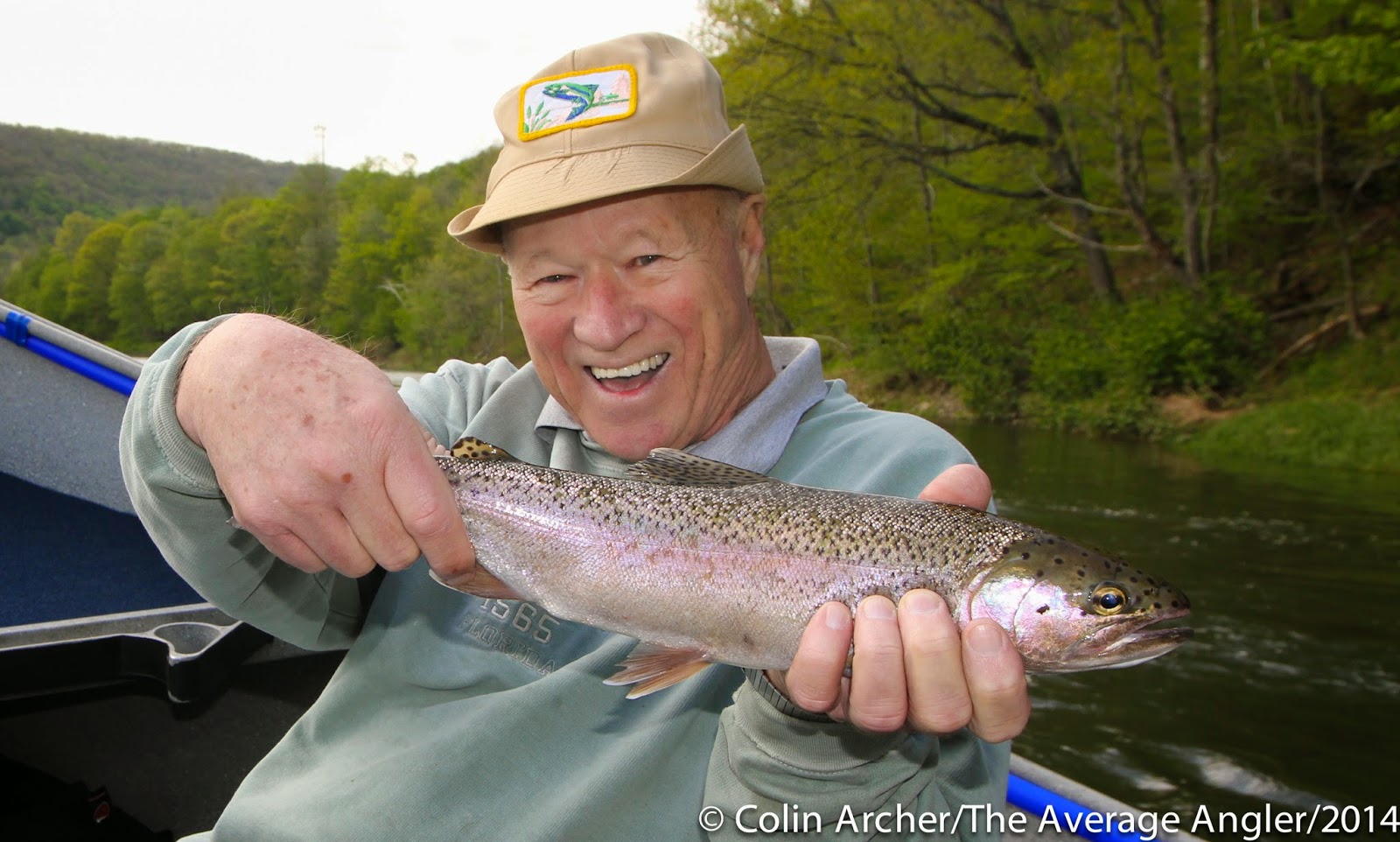 So I had three days in a row guiding on the Delaware. Monday morning I got a call for a cancellation for Wednesday due to the recent rains and high water levels.....all I can say is.....the fishing was great. The trout love the high water and after things settled down the bugs came and the fish ate. 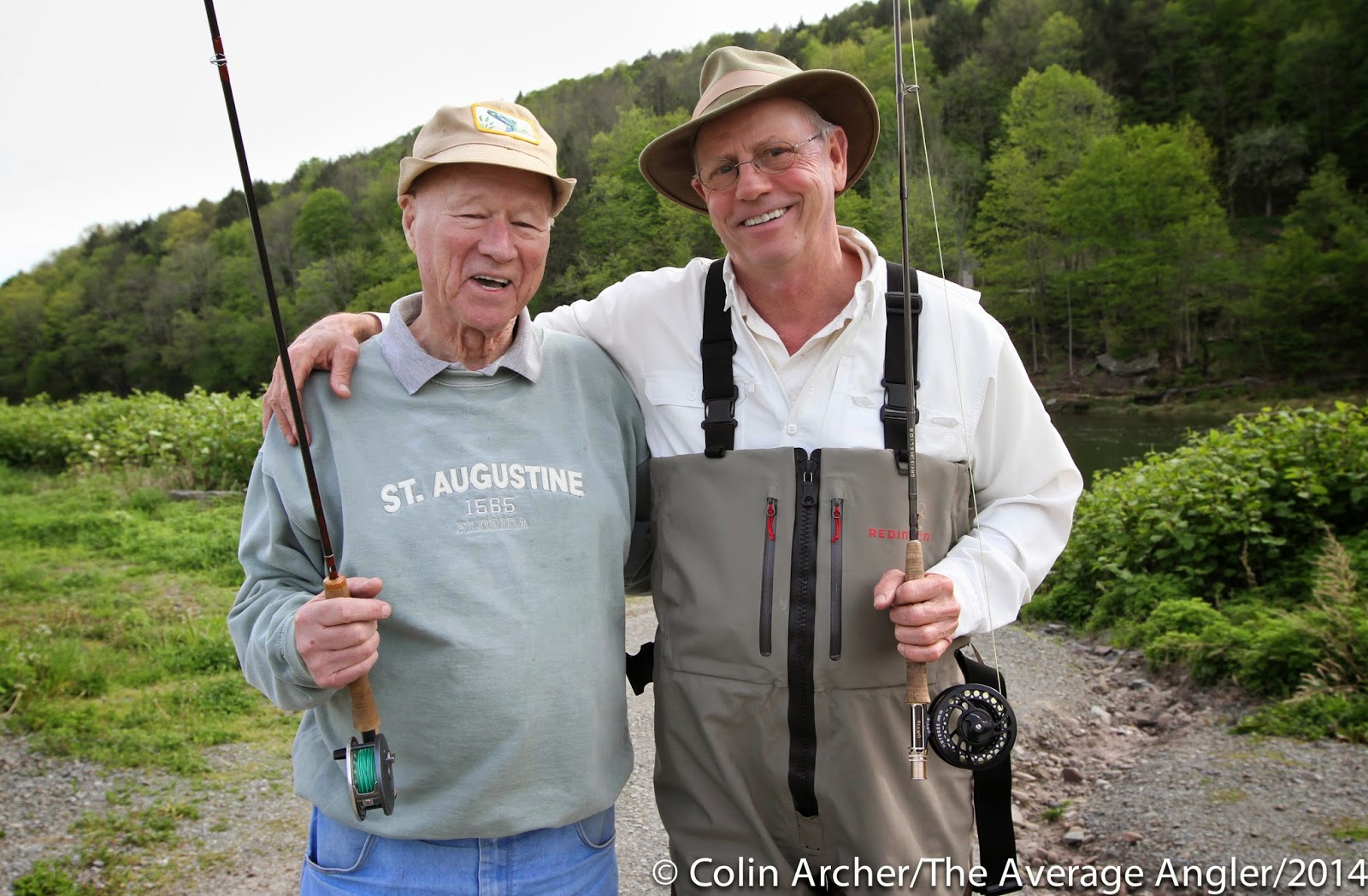 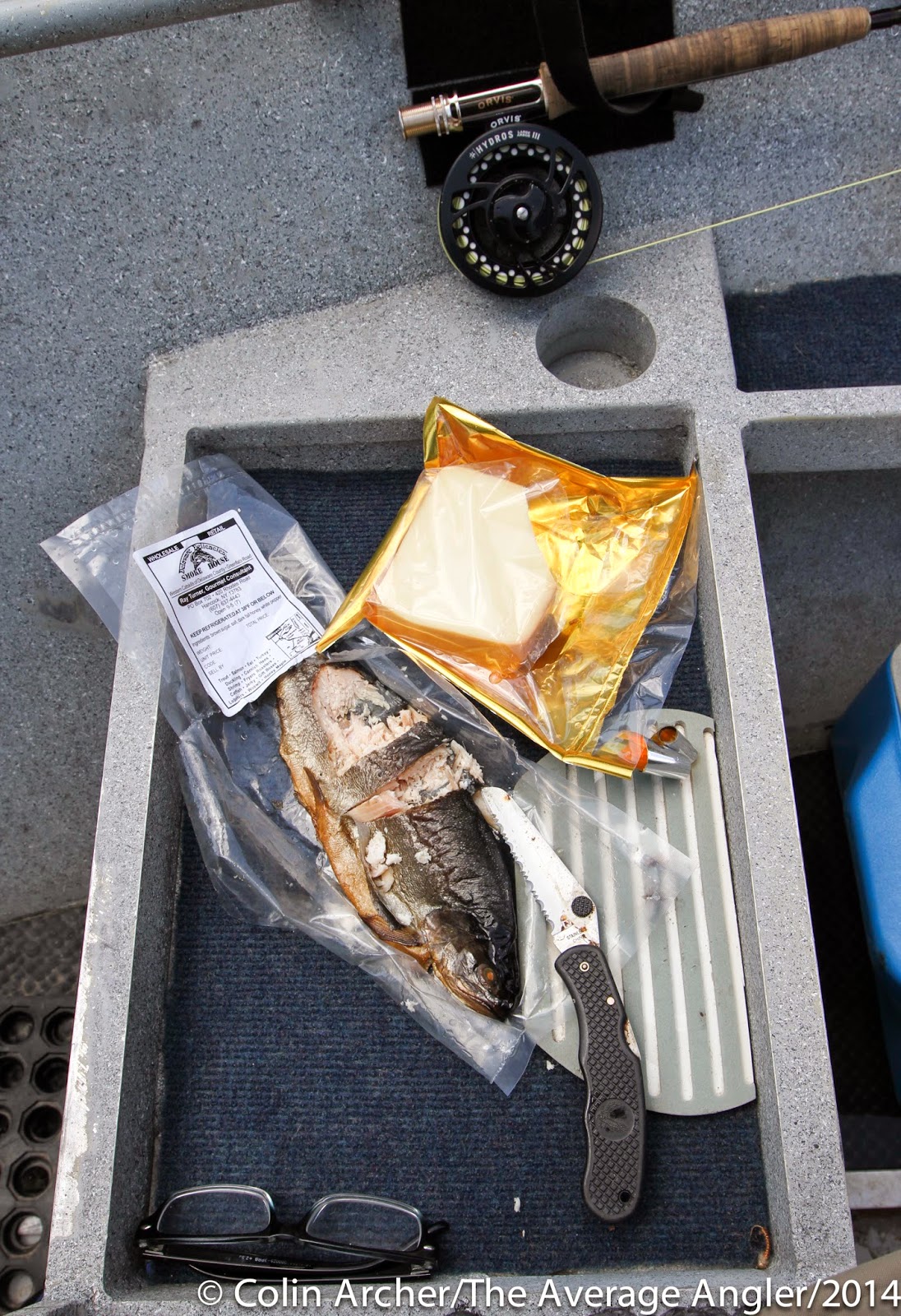 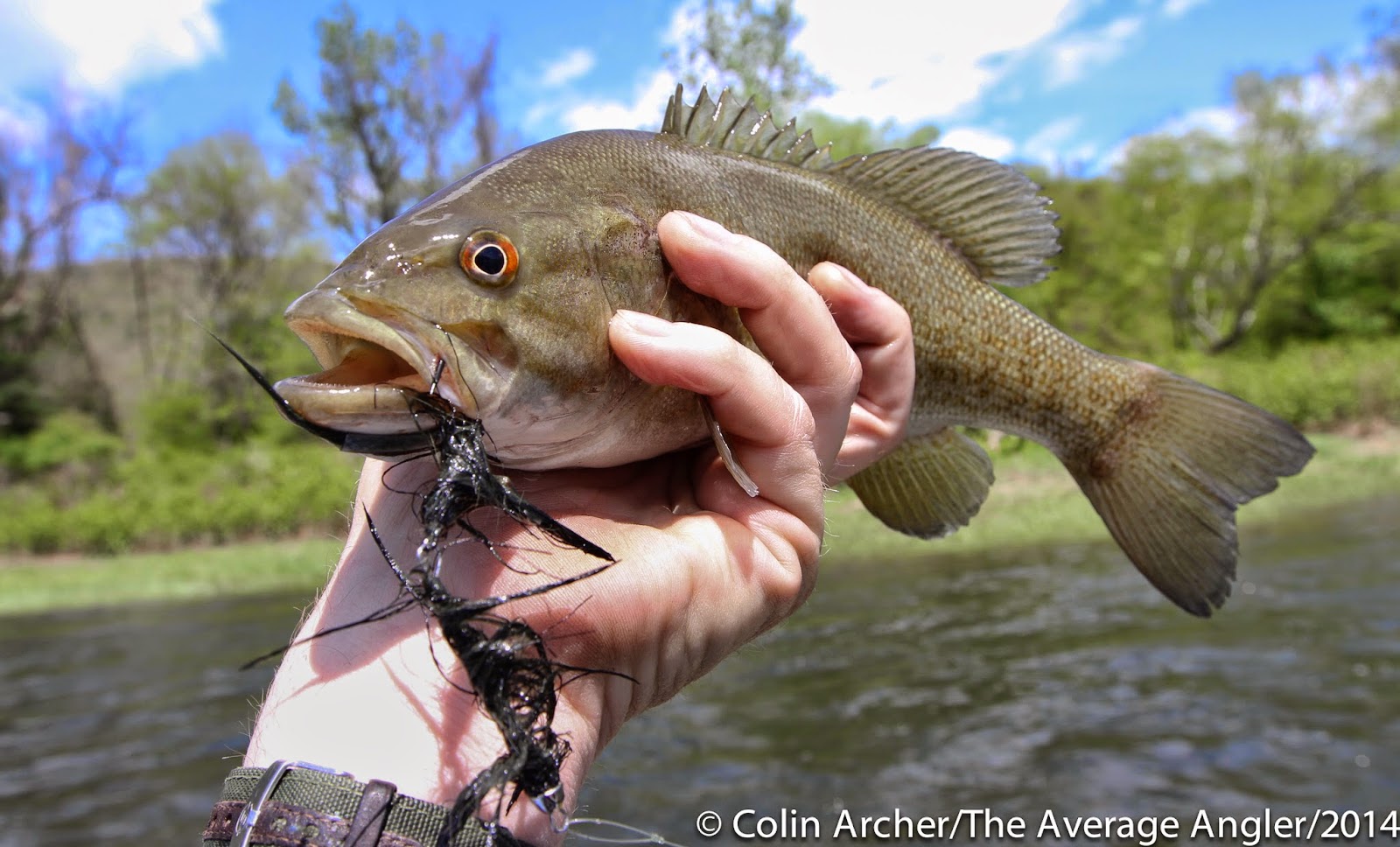 On day one I had friends Guy and Herb in the boat. We threw streamers, landed a few smallmouths, ate some of Ray Turners smoked trout and mozzarella, had a great lunch Guy's wife made, and had a lot of laughs and a great time. The highlight of my three days was finding a pod of rising fish, the only of the day, and watching Herb catch a real nice rainbow.  The top picture says it all. 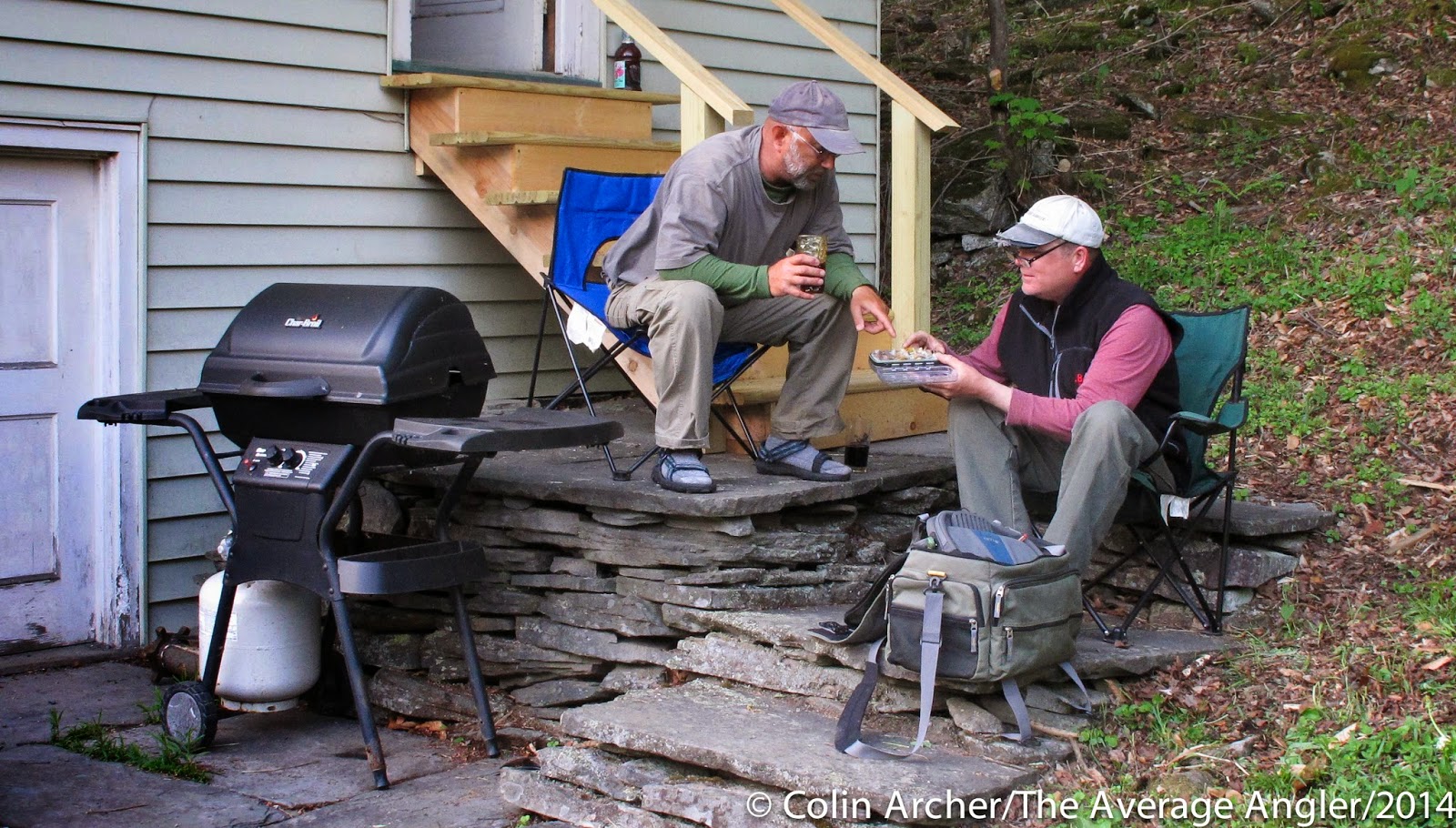 With the cancellation for Wednesday and no takers for the boat, fellow guide Bunky and I decided to have a guides day off, which means, we were unemployed for the day. Charlie had to stop by Ben Rinkers beautiful set up on the East Branch, HERE, before we went out for the day. As we talked Ben got the vibe that we were slumming it and wished he had known, he had a buddy in town and was looking for a boat. I turned to Charlie and gave him the look.....later. But Ben had other ideas. He called his buddy Bob and he wanted to buy half the boat for the day and join Charlie and I.....sold! 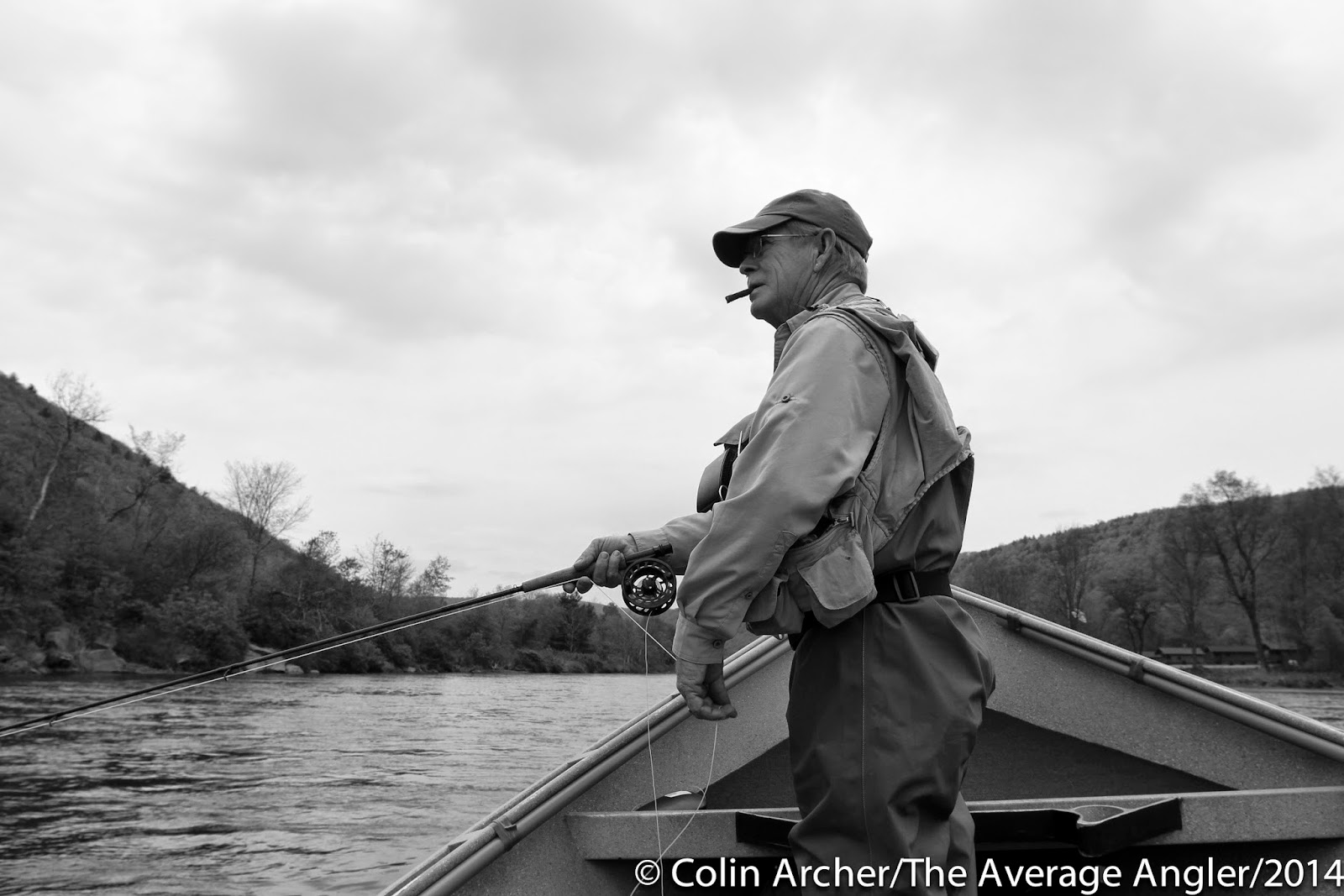 Since Bob was paying he got the best seat in the boat and he didn't disappoint. Streamer casts to inches off the bank and the same went we went to dry flies. Charlie moved one on a streamer during the first few hours......the it got cloudy.....then it rained....then it went off. 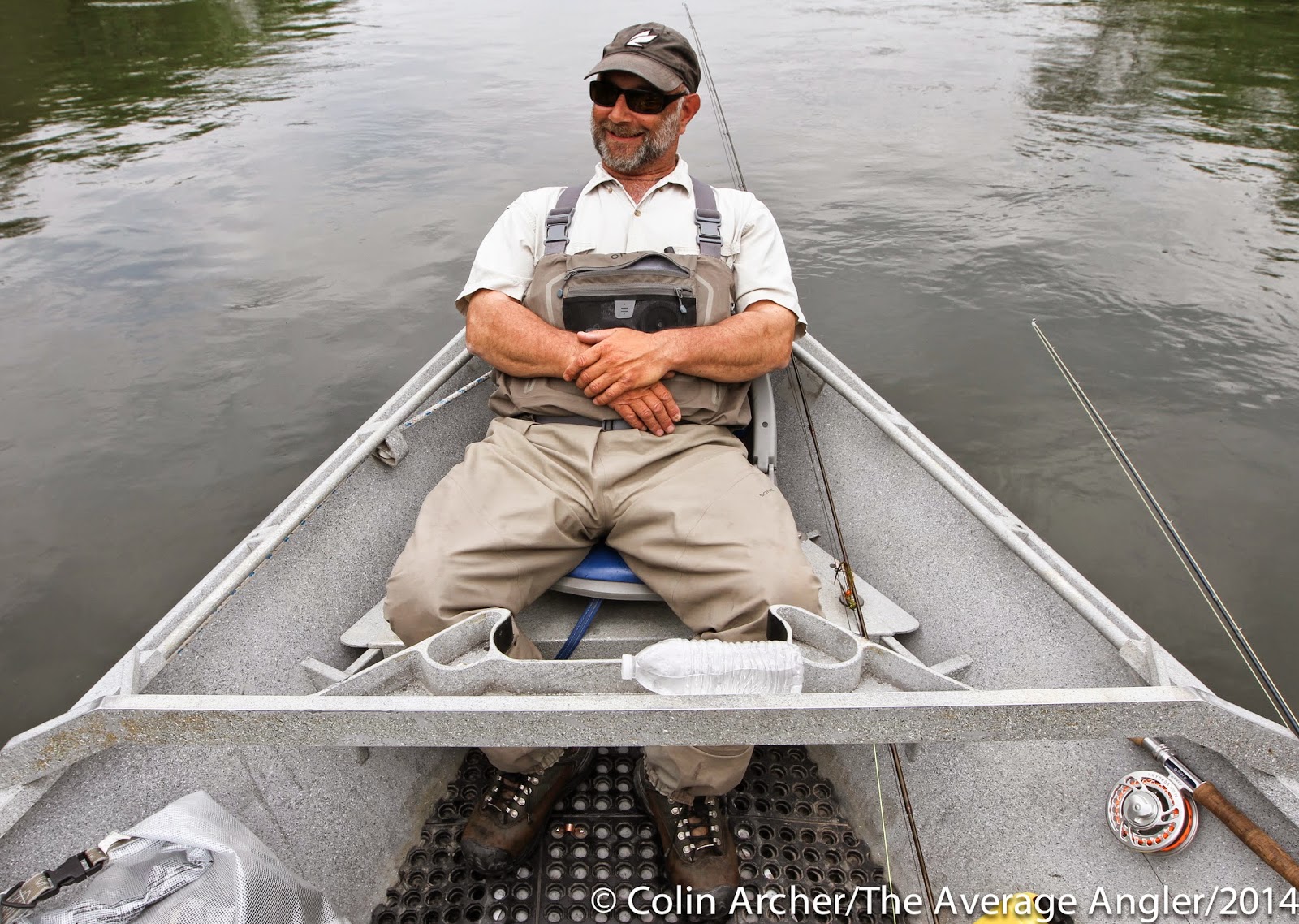 Over the next several hours into dark we had a steady hendrickson hatch and heads in every direction. As the sun set spinners covered the water and that's what we threw, and that's what they ate.
We had to put over 20 fish in the net, flossed a bunch more, broke a few off....and the boys even let me get in on the action....and yes I broke off a beast....a perfect one that got away story. 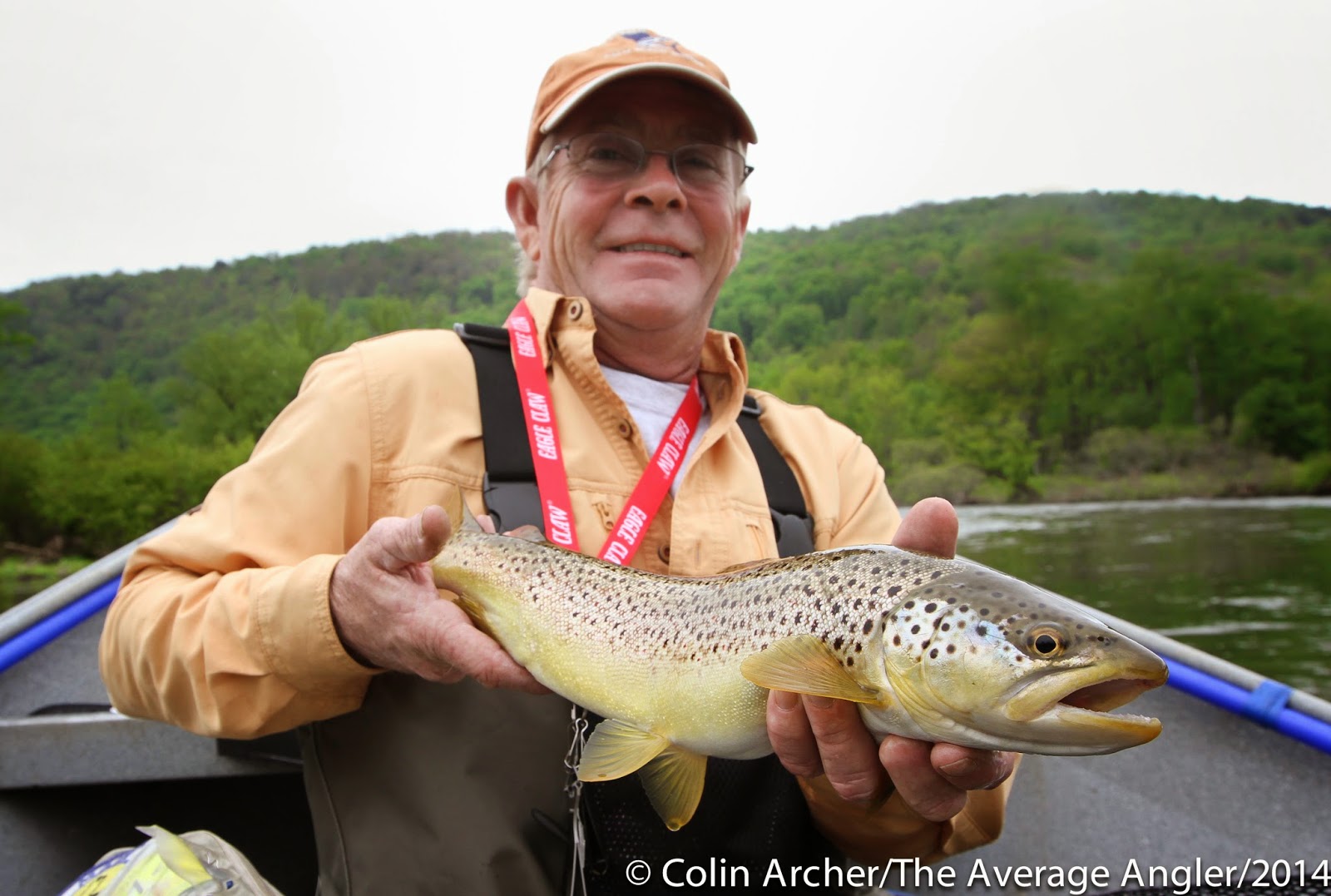 And today I had Mike out for a nice day.....lots of sun, maybe too much for a little while, before the clouds rolled in and the heavens opened up on us just as we took out....that included marble sized hail that lasted about 10 minutes. But right out of the gate, unlike the day before, we had fish up taking caddis and Mike worked a nice pod before landing the below brown in a not so traveled channel. 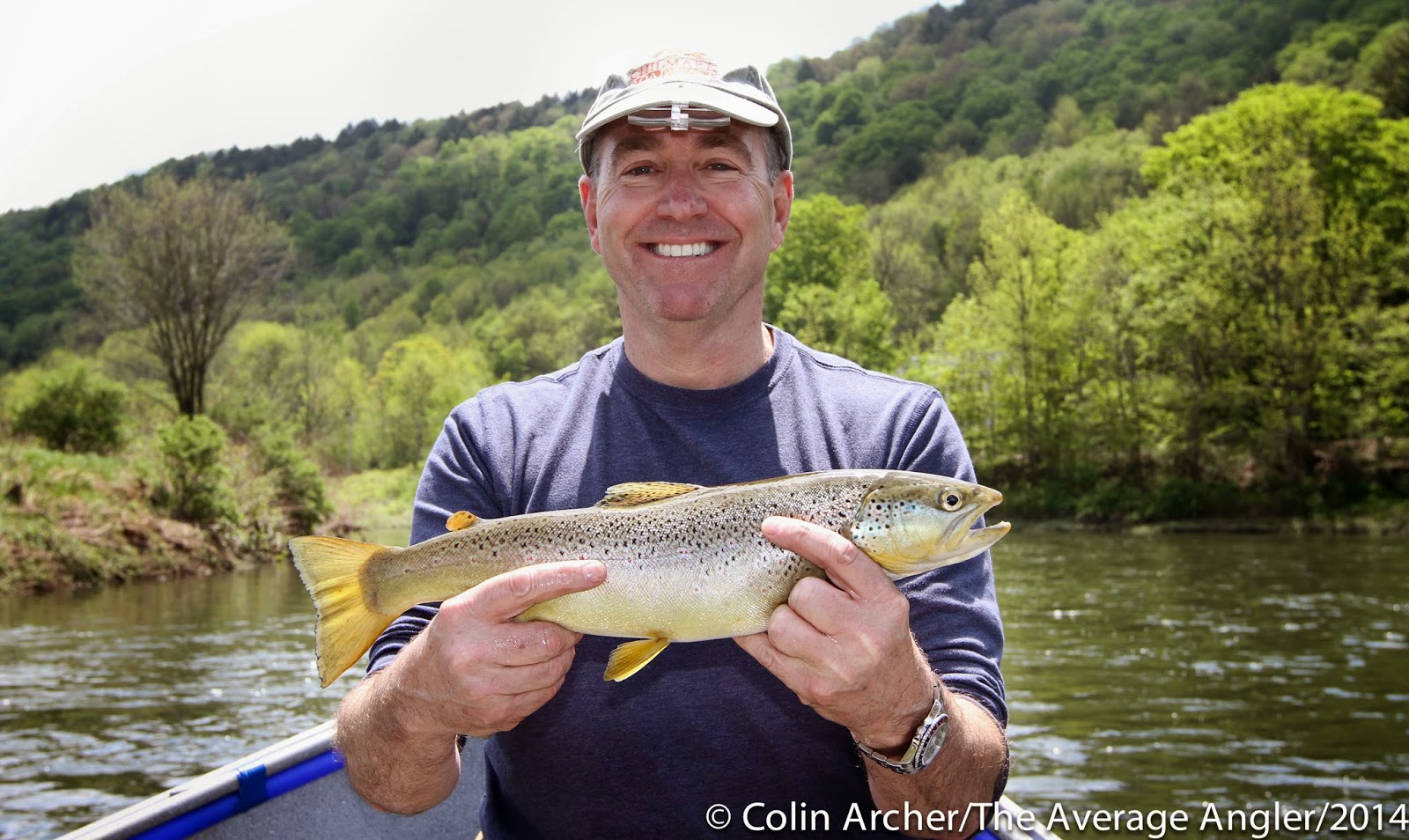 The rest of the float was just nice. No waders to dodge, a few boats, lots of bugs, and heads up here and there. We did have a period of some wind blowing in our faces which was a little challenging in presenting flies to the rising fish. Mike landed another nice brown on a super long drift into an eating fish. We called it a day and started rowing out with sun in our faces and a front to our backs. Just 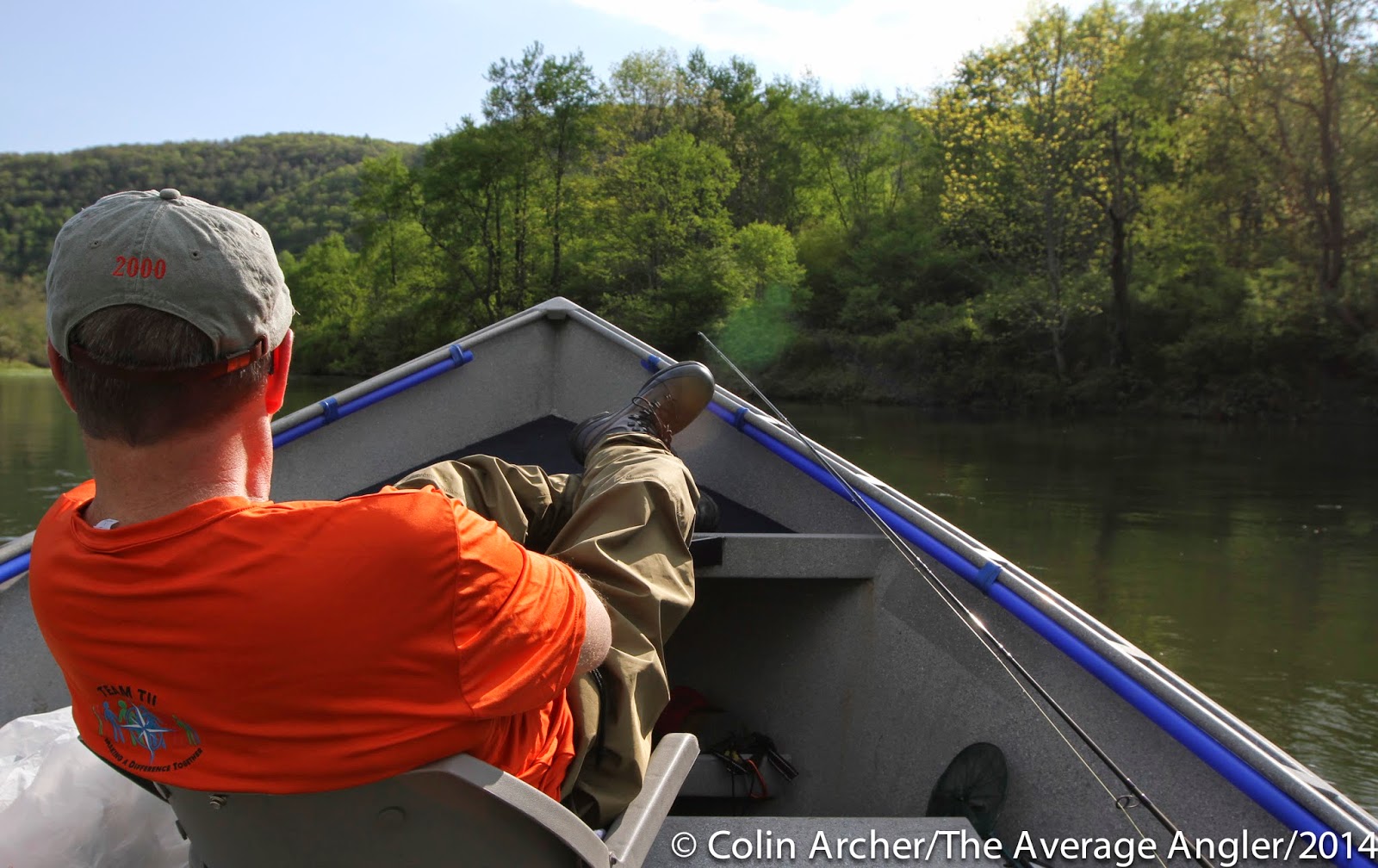 as we got to the ramp first the rain, then the wind- I almost lost the boat as the wind pulled it and the anchor out and downriver- then the hail. It stopped in about 15 minutes and then some sun showers before the rainbows started to paint the sky. I am sure when it all settled down and the sun set, the rainbows, trout that is, came out and up and stated sipping spinners. 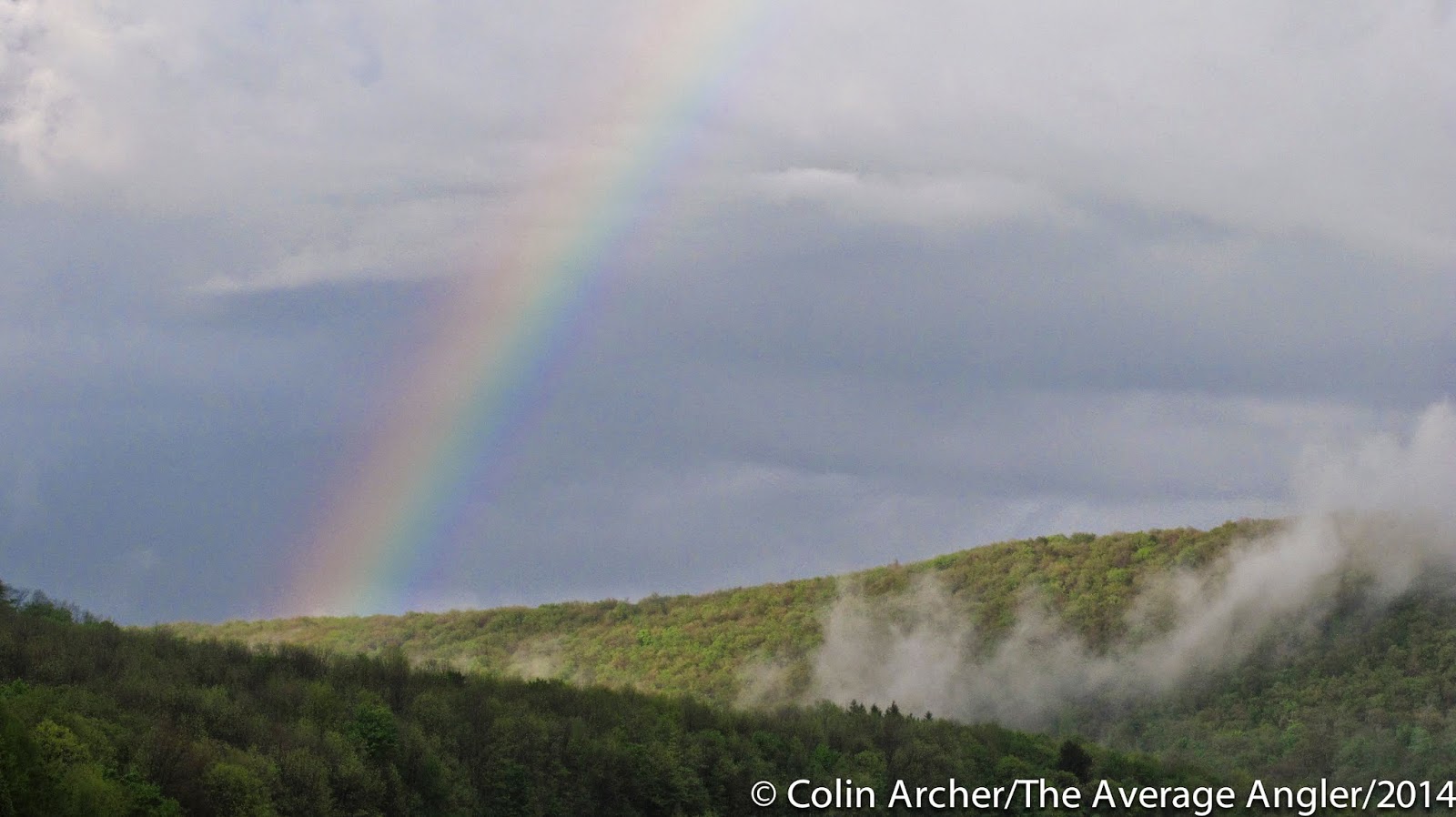 Posted by The Average Angler at 12:21 AM