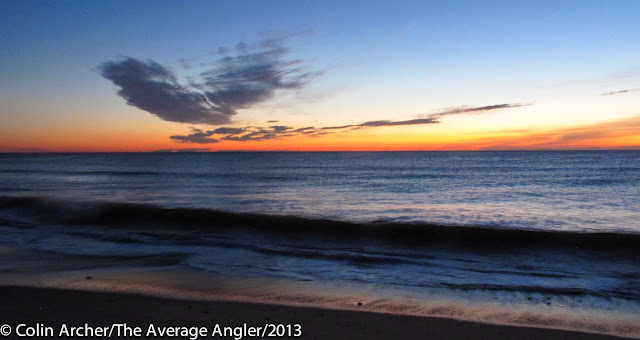 Out at 430 am again today. Hoping to find a striped bass at dead lot tide. Had enough moon light so you could scan the water for any signs of life while walking the beach. I found none. Hoping for a swirl or sign of bait. None. Then I started to try and think like a striped bass. Here's what I came up with.

In the last two weeks, or so, we've had real good fish, in size and numbers, hit the beaches to the north, and then the south. These are Chesapeake and Delaware fish that are on the move. Primarily eating sand eels and mullet they came, ate, and moved. Anglers were hoping this last weeks abundance of southern fish would repeat the fall of 2011. Well, it seems, they came, ate, and went.

Yesterday there were a billion, give or take, or fish in the 15 - 30+ inch size that were out and about to the north. People there were excited to see them and catch them, lots of them. Most reported a slim short to keeper catch ratio. Others were excited in hopes that those fish would be making their way down the beaches. Here's why I don't think that's whats going to happen.

Those smaller fish, if you will, aren't migrating. They are the Hudson River fish that are smaller in size and winter over in those big deep holes up in the Hudson. They gather, like the bigger migrating fish do in the spring, in the New York Bite and bays eating and then following bait and making their way up to spawn. These fish are gathering in comfortable water temps enjoying the food that is around. Yesterday I saw bait, not tons of it, but bait. Most likely sand eels. I saw one bunker flip inside.

When they get uncomfortable, with water temps or conditions, full of bait or there being a lack of bait they will move up and on. Yes, some of the bigger and older fish may still move past us, but they will only stop if there is something to eat or they need a blow.

Is the fall run over? Will the big bunker and ocean herring spark a push of the bigger fish still moving in? I don't know. But I will still keep taking people fishing, and continue to try and think like a striped bass.

This weekend is the International Fly Tying Symposium at Somerset. It's a great two days. If you are a fly tyer or are interested in fly tying it's a must go. The show runs Sat and Sun 9-5 at the Garden State Exhibition Center in Somerset. 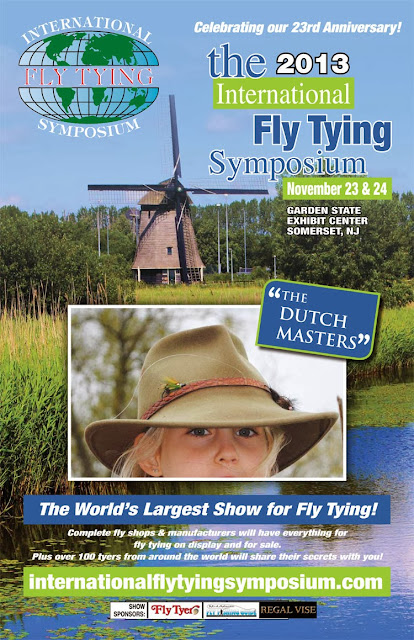 Posted by The Average Angler at 7:14 AM