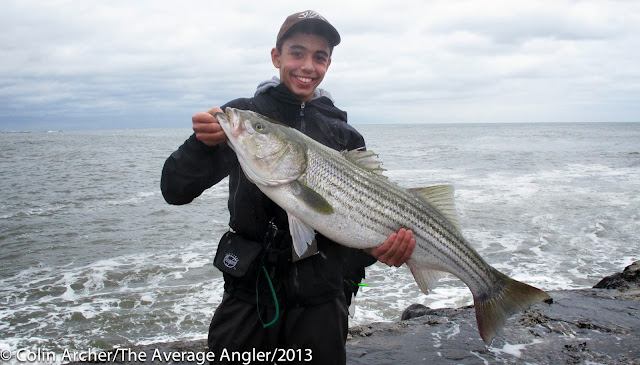 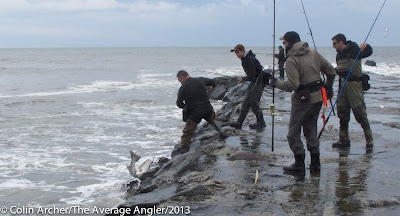 Today I met Zachary. Zachary is a 14 year old who came down from north Jersey with his friend and his dad to fish for striped bass. I watched as they made their way down the groin and took up position amongst a handful of anglers. After a little while I looked up and one of the boys was hooked up, I mean hooked up. I could see it was a very large bass as it closer to the rocks. It was high tide and he decided to bring it up the rocks rather than work his way down to the beach.
Everyone had stopped fishing and moved closer to either help with the landing or see the fish. When he got it up on the rocks and laid it in a puddle of salt water you could see how pretty she was. In my estimation she was around 40 inches and 25 pounds. As he removed the hook I moved in and myself and another angler asked him what he wanted to do with it, keep it or release it. I don't think he was really sure what he wanted to do with it that second. But as he stood there I told him I could take a nice picture of him with it and he could release it, or he could keep it. He quickly answered, "I'm going to release it." 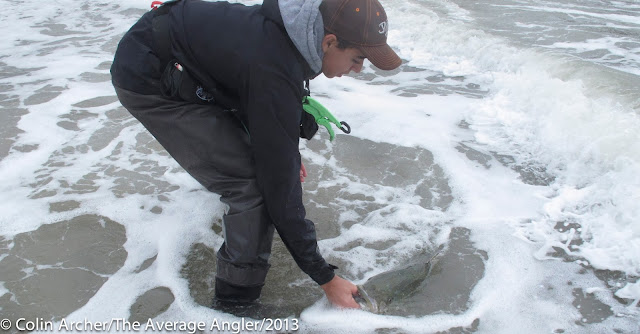 I made sure I got off a few quick frames before Zachary and I made out way down to the water. He did a great job cradling and moving the fish back and forth in the water. With the size of the fish and the waves coming onto the beach it wasn't an easy task. Seeing it wasn't going easy, and with repeated offers from a guy on the rocks saying he would take it, I asked if I could help him out. He had done all the work I just happened to get a few back and forths before a powerful tail swing propelled the fish back into the surf.

Later on I talked with his dad who said Zachary loves fishing and loves fishing for striped bass. His father also said that his son out fishes him on every outing. Now here's, well not the best, but a good part of the story. Recently they purchased a couple of 9 weight setups to use in the saltwater. They have practiced on the lawn at home and took them on vacation to the Caribbean, but haven't used them in the Jersey salt for striped bass. His father also told me that his son is very interested in the conservation of striped bass and he has been following the recent developments in the striped bass decline and results of the ASMFC votes last week. In addition, he is going to do a project and presentation for school about striped bass conservation. I told you I met a special young man today.

As they got in their car I told Zachary how proud I was of him and how much a part he played in help save the striped bass. I also told him that releasing the larger females will help ensure the species survives in better numbers we are seeing. His father took my card and gave me his email so I could send him some pictures from today. He said he would like to schedule some intro to fly fishing classes, casting lessons, and maybe a walk and wade or boat trip. I said that would be my pleasure, nothing like getting parents and their kids started in this great sport.

I shook Zach's hand again and said, " Great catch and great release, and Zach, the first fly fishing lesson is one me."

A great, great moment today out on the rocks.

The day started early getting to the beach by 330 at dead low tide. Found a few anglers out at my first of many stops and soon a few fish, some really good fish, were being caught, and kept. There weren't any small ones, if you had a fish on it was a fish better than 32 inches and 12 pounds. The fish below
taped out at 36 inches but didn't have the weight the other fish did. 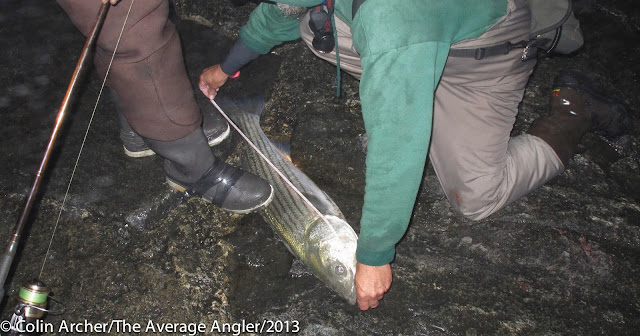 Just after first light I had to go get my daughter off for her driving test. The driving school was picking her up for a quick practice and then off to motor vehicle where she would pass. Now I have two seventeen year old drivers! I went back down on the flood tide and hit some spots that were off color before finding some fishy water that I had all to myself, literally.
By the time the events with Zachary were over I had thrown five different flies on three different line weights without a bump. In addition to large bass I saw several hickory shad and snapper blues (which I thought was interesting) caught.

In the end it didn't matter if I hooked a fish or not as a nice young man had made my day. 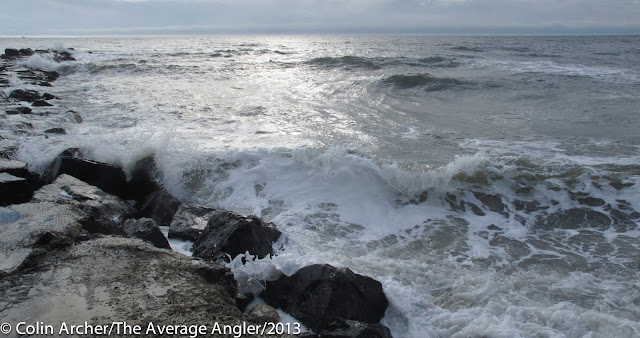 Posted by The Average Angler at 11:53 AM