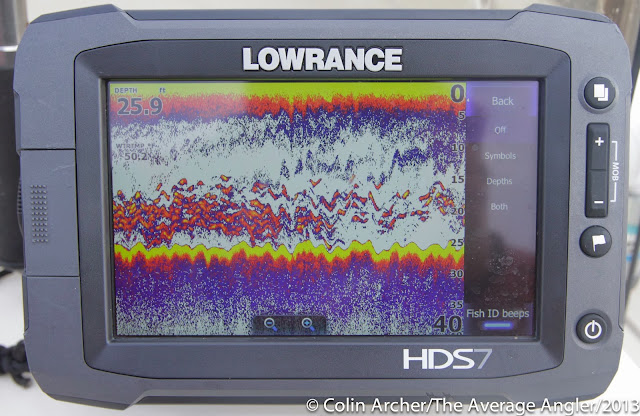 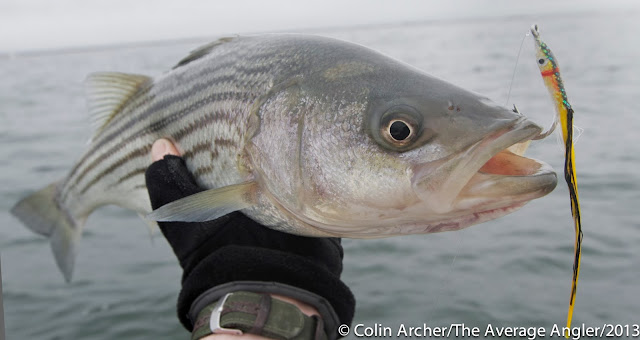 It was a good day.....a real good day. I'm not one to fish count, but today I lost count. My hands are still cold.....they are still pickled from being in the water.....and my bass thumb is coming along nicely.

I tried like hell to "sell" todays trip to some previous clients and some prospective clients that I am scheduled to fish with in the future. I knew things would be good conditions wise I just didn't know the fishing would be as off the charts as it was. Sadly I had no takers.

I had the boat wet at 430 am and made my way out in the dark. By first light I was in my first spot and it was desolate. No marks, no birds, no bait, and only a couple of fisherman on the beach and a few boats on the horizon. I went looking around a bit and found things looking dismal. I was cold, it was starting to rain, I thought the day would be a bust. Little did I know. 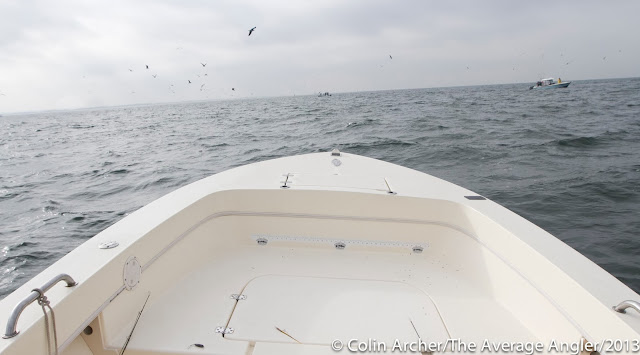 I made a decision to make a long run to find some fish. I drove about a half a mile and found some birds working and two boats in the area, with an angler on each hooked up. I didn't mug them but did stop and took a look at the screen...and things were starting to looking good. The fish were stacked up 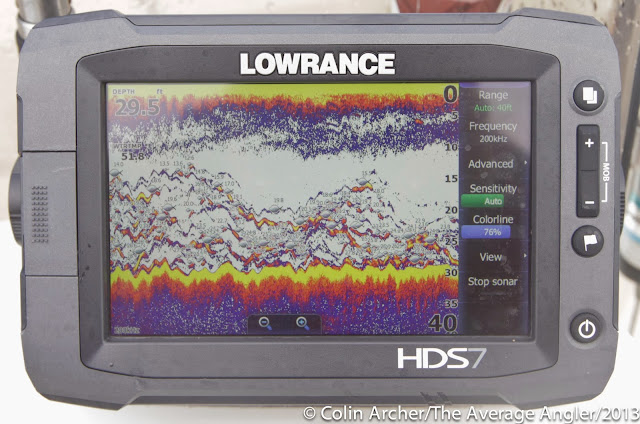 in the lower half of the water column and on my first drop of the fly I had a nice 30" fish on. There was a lame drift and the fish weren't up top, at all all day, so you really had to work to get the fly in front of their face. Today was a nymphing day. No dry fly action at all. But that was fine. I landed a few more fish as the birds broke up and the screen went quieter.
I started to make my way to my "long run" and didn't get far, actually about another half a mile,  before finding birds and boats and an absolute ton of bass. They were stacked and they were eating. They seem to really like the troller's umbrella rigs because I saw about 1,000 fish caught on them as the boats trolled around. I watched as the party boats jigged away, but they seem to do as well. The tide

started to move and the drift was perfect. Since I saw the guys with the umbrella rigs I decided to go to a multiple fly set up dredged down to where the fish were. I started with a double sand eel combo, which worked, then went to a Snake Fly sand eel combo, which worked, then trying to get a big bass, went with a big 8/0 Montauk Monster with a sand eel fly, they only bit the sand eel. The fish today 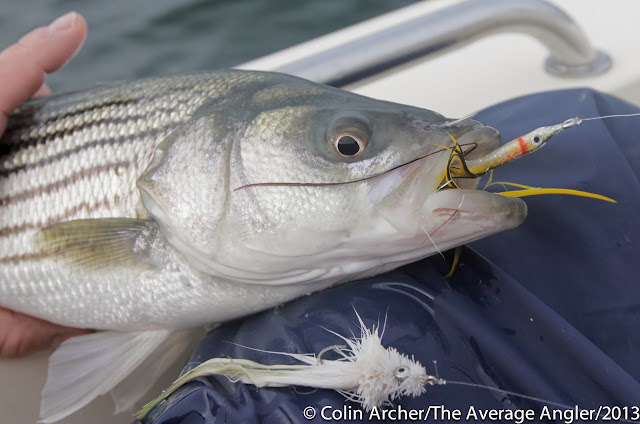 were smaller than the big fish that were north last week and south this week, but there were a ton of them. A charter captain that I know who was around in the mix today said he had 11 keepers to 22 pounds, and over 120 - ONE HUNDRED AND TWENTY ! - shorts. That's a lot of fish and a lot of

sore arms I am sure. All in all a great day on the water and nice to see so many fish around. The thing we have to remember is just because the fish were here today doesn't mean they will be here tomorrow. We have some weather coming in the next few days so we'll see what that does. It would be nice to get these fish up on the beach for the anglers who have waited patiently in their "home" spots for the fish to show up.
Posted by The Average Angler at 6:03 PM