Talk about hitting a switch. Started out early with a southwest wind with air temperatures around 50 degrees. With minutes before slack high tide I hit a few spots figuring it would be slow till the tide turned. On my second spot I hooked into a nice fat bass on my first cast. The fish grabbed a sand eel fly on the beach end of a notched groin. Lots of water movement and I figured the fish were stacked there waiting as the tide and wind brought the water from left to right. Fished the same spot every which way but that was the only taker. 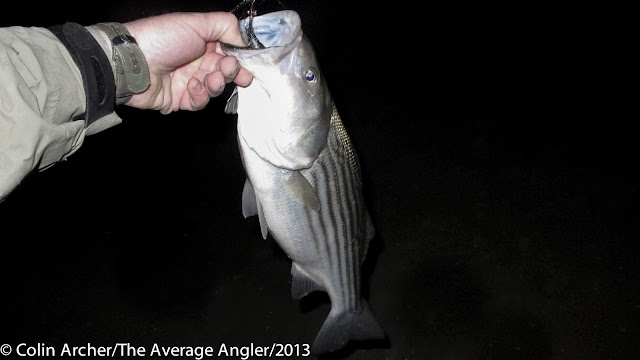 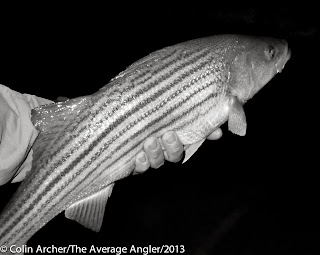 Fished till about 5 am and by then the wind had started to shift from the northwest and pick up and bring in the colder air temps. By 7 am it was blowing hard and SNOWING! The air temps had dropped to 34 degrees, nearly a 20 degree difference.

Headed back just after low tide and found birds working on sand eels just off the beach. I did see, in the near white out snow flury, fish busting on top but it wasn't steady. I watched and waited for them to push in but that never happened. Today was my first time using the STORMR Typhoon neoprene gloves. I have went through a bunch of different gloves to use while fly fishing, some with the finger tips cut off and some without. In the mid 30 temps these worked great keeping my hands warm and still giving me control and "feel" of my fly line. I was using an intermediate line which is thicker than a sinking line so that extra mass helped with the feel. For fly anglers that feel, especially during a strip strike, is so important that we usually sacrifice warmth and comfort for the control we get with bare hands. In the end, we wind up shortening our day when our fingertips start to lose feeling and hurt from the cold.

Posted by The Average Angler at 12:59 PM