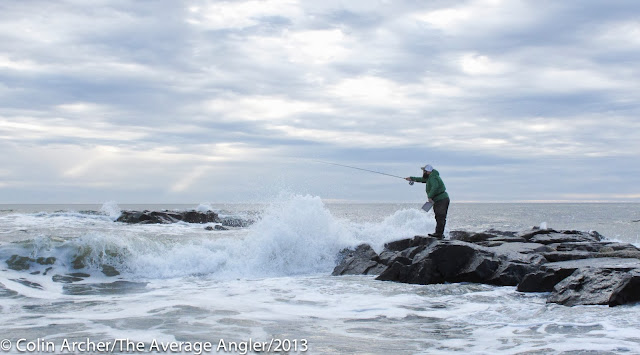 When I woke up at 5 am for todays trip with Chris is was raining sideways and the wind was howling. I almost gave him a call to cancel. It wouldn't have been nice for a guys first time on the rocks with a fly rod. So, I held off.
By the time 6 came around it was like it was a different day. No rain, soft SE wind, and warm with clear skies. The water was fishy looking an hour from high tide with swells, waves and lots of white water. We went right to work following my intro to saltwater and striped bass speal. Chris is a good caster and spends a lot of time fly fishing on the Upper Delaware river system. Of course it is a little adjustment going from a 5 wt mid flex to 10 and 11 weights with sinking lines. 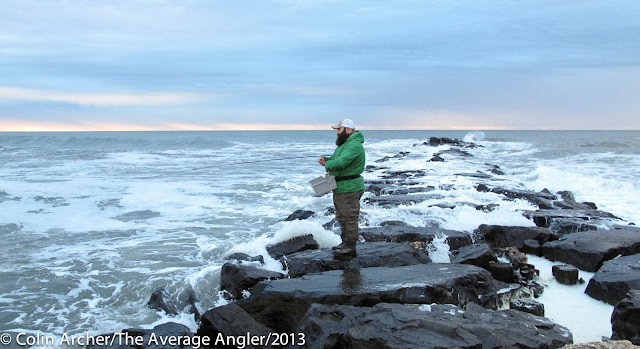 We looked for signs of fish, none, signs of bait, none, signs of bird life, a few. We jumped around a bit and found what we thought was the mother lode tucked into a pocket. About 40 birds were flying in tight and picking right off the top of the water. It was a about a 3 block walk for us and as we got near we saw what was really going on. A spin fisherman was there, one rod stuck in the rocks, one at his side, and a bag of bread or pellets that he was feeding the birds! If I wasn't a nice guy I would have said something, even though he wasn't doing anything wrong. Maybe he thought getting the birds all hopped up would get the bass' interest and bring them onto the beach.
We worked a combination of rods, lines and Snake Flies and sand eel flies without a bump. We felt pretty good that we had worked hard and that today there just wasn't any fish. That was until a friend, or so I thought, of mine came over to talk and said, "Oh, you guys didn't get any, I three a few blocks down in the pocket, one was 34"!" Thanks for the buzz kill.

It was a great morning with a nice guy who will for sure be out and about fly fishing the salt. Chris owns a barber shop in Keyport called Calabrese's Barber Shop. It's an old school kind of place where you get a haircut and warm lather shave, something you don't see anymore. You can read an interview with Chris HERE.

You'll have no problem picking him out on the beach, he's the guy with the full near ZZ Top beard, who looks like he needs a barber!
Posted by The Average Angler at 1:22 PM