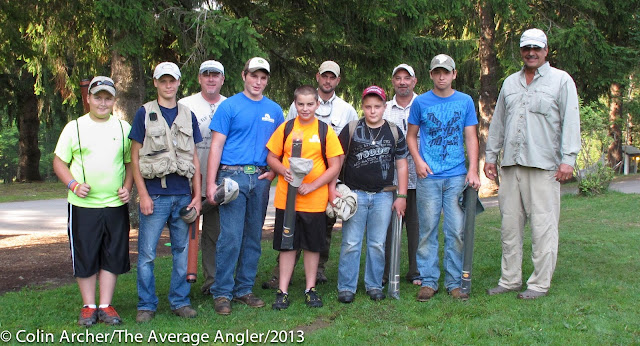 Had another great opportunity to join some other Upper Delaware guides to work at the annual Bill Canfield Youth Fly Fishing Camp. Like last year the camp was held at Camp Weequahic in Lakewood, PA. Joe Demalderis, Charlie Limpert, Brandon Alexander and myself had a blast introducing kids to fly casting, tying, and fishing. We started out by giving the non-returning students Orvis Clearwater set ups that included rod, reel, and line. Over the four days, which ends Sunday, we started with casting instruction, demonstration, and practice on the lawn before moving to the lake. Mixed in was fly tying instruction and practice before tying on their flies and hitting the beach, docks, and boats for a shot at sunfish and bass. In between were fun games, good eats, and a lot of laughs and fun. 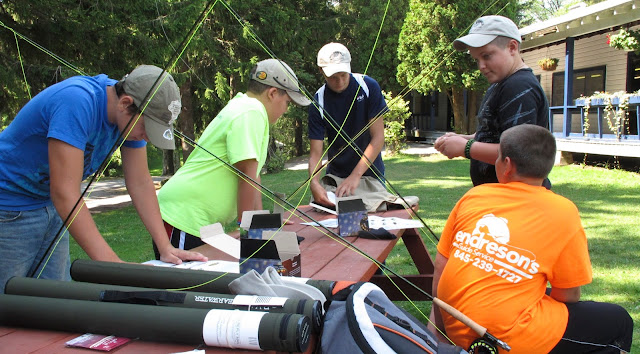 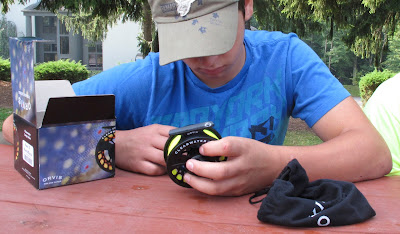 During the camp the boys met Dave Canfield, the late Bill Canfields father, and were given a talk about Bill, their father and son fishing trips, and about what fly fishing has meant to the elder Canfield and his sons over the years. Bill passed away four years ago after a brief battle with cancer. This camp was created in his memory by his father Dave, brother Doug, and their long time guide Joe Demalderis. After the talk Mr. Canfield then joined us on the "great lawn" for some additional casting lessons before going "live" at the lake. 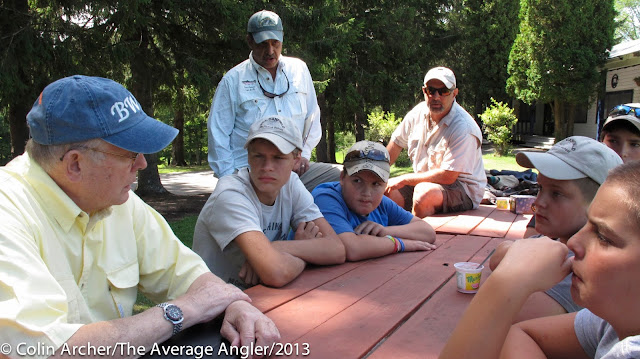 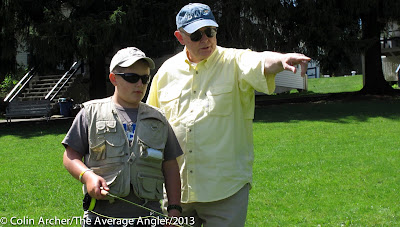 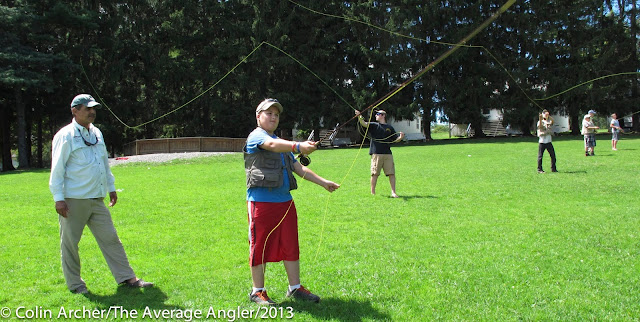 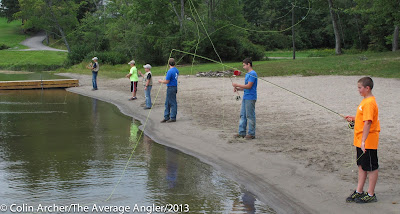 One of the kids favorite part of the camp was the fly tying instruction and time at the vice each morning. With Charlie Limpert leading the classes the boys tied up some Wooly Buggers, Pheasant Tail Nymphs, San Juan Worms, and some un-named and interesting flies. 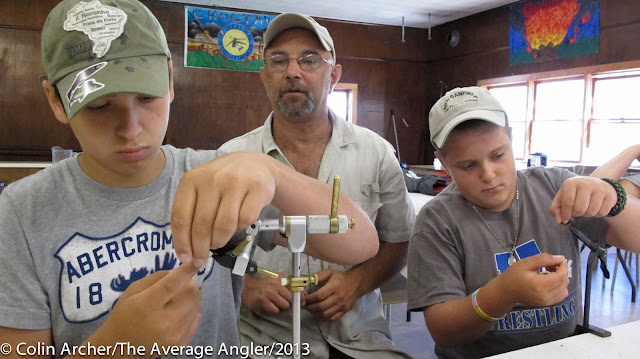 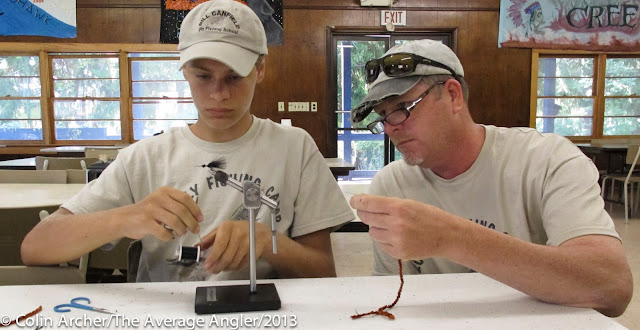 In between the fly tying the boys played the ever so popular Ga-Ga-Ball and had lunch prepared by the kitchen staff at the camp.

We brought our drift boats to the camp and during the afternoon sessions we loaded up the boys and gave them go fishing the deeper water and lake sides of the lily pads and down trees along the shore. There was more of a bluegill and pumpkinseed bite then bass, but a few small bass were caught on a variety of flies the boys tied up. For many of the boys it was their first fly rod fish which brought all parts of the camp together in one little fish. 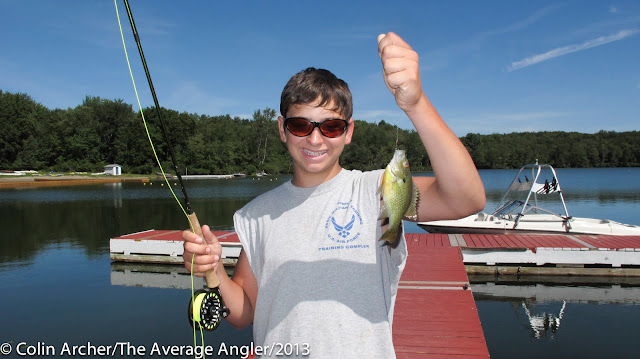 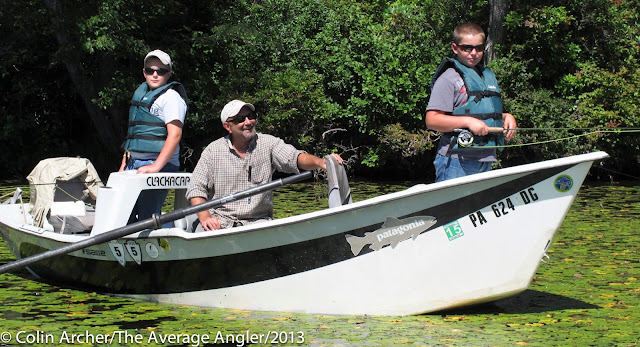 The guides and the kids will be looking forward to having the camp next year. There are plans in the works to expand it including inviting kids from towns up and down the Delaware. This camp was started in honor of someone who loved fly fishing, the Upper Delaware, and kids. Joe D said the idea for the camp came to light based on something the late Bill Canfield said several times on guided trips on the Delaware. He would always say, "Where are the kids?", as he floated down the river. Well, hopefully as this camp continues and as more kids attend, the seed of the great times and benefits that fly fishing and fly fishing the Upper Delaware can give someone will be planted. So when Bill looks down he will see drift boats, wading anglers, bugs and rising trout, and kids dotting the shoreline enjoying the fishing and the beautiful outdoors. 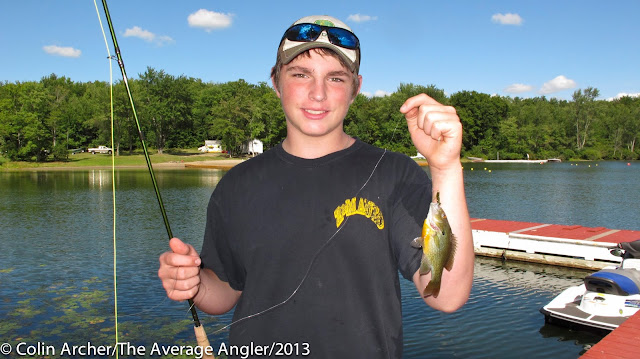 Posted by The Average Angler at 10:52 PM