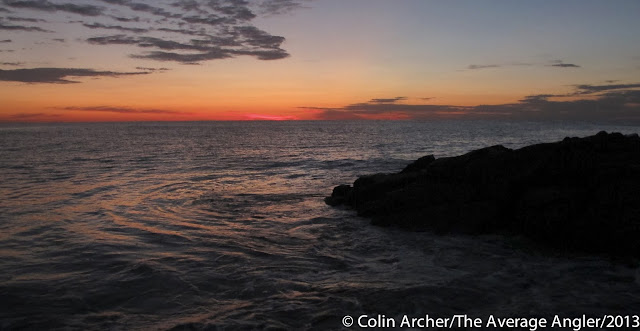 Pretty morning with flat water on the flooding tide. Got out early enough to jump up on the notched groin to fish the tip before heading back to the beach as the water rose. Went with the popper and stayed with it maybe a bit too long. After an hour or so the beach walkers started to show up. I crossed water with a spin fisherman who was using a black swimmer/teaser combo who didn't muster up a bite.
Spin fisherman, for fly fisherman, are a great resource to find out if fish are taking offerings other than flies. So, today, it was confirmed that there were no fish around, until the walking lady stopped by.
I saw her approaching and held my cast so I didn't catch her. She stopped and asked, " Get anything?" I replied, confidently, " No, not today. No one's home." And then like a needle to a balloon she answered, " The guy on the jetty over there got a big one!." I knew what groin, and which fisherman she spoke of, and answered, " He always catches fish." She added, " It was big...."
I switched to a sinking line with a Clouser hoping to get a bass that was chasing sand eels but that didn't excite a fish. On my way out I met a guy getting ready to soak some clams looking for a bass. His name is Ron Popivchak and he is a regular contributor to The Fisherman magazine. He handed me a copy of one of his latest articles titled, "Four Great Myths Of Striper Fishing". Before I pulled away I 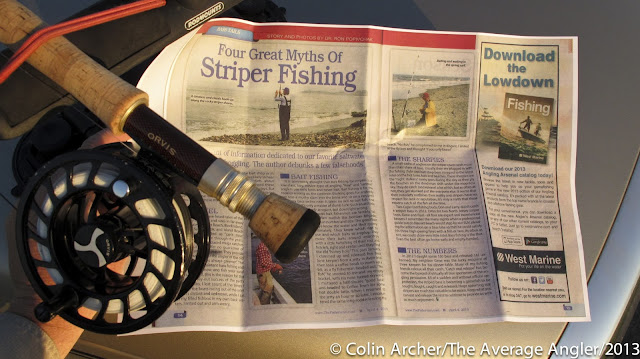 read the article and was slightly entertained at his encounter with a fly fisherman he had in January. He wrote,

" This past January I clammed up and released five bass (one keeper) from a jetty in Avon and then took a coffee break to warm up a bit, as a fly fisherman headed out. "No fish," he snorted to me and my empty bucket, with his nose turned skyward. I muttered a half-sincere "good-luck" and headed to Coffee Town for some hot double latte. When I returned to the jetty an hour or so later, I encountered the same long-rodder leaving the beach. "No fish," he complained to me in disgust. I smiled at the fly boy and thought "if you only knew! "

I could pick at this since I know most of the fly rodders that fish those waters regularly but I won't, as the writings are the authors experience and it may have happened just as he wrote. But what I will comment on is the line, "...with his nose turned skyward." I think that line is funny as it just confirms and perpetuates the stereotype that fly anglers are snooty, elitists, and purists.

I would venture to bet the that the fly angler he encountered does, "if you only knew!", probably because he calls that stretch "home" and fishes it several times a week if not daily. I too had similar outings having talked with friends who had banner days soaking clams over the winter while I put up zereos. But, it's not just about catching fish, to some it's about catching fish the way that person wants to catch fish. Some of us prefer using a fly rod, no matter if the bass are eating fresh clams or bunker chunks weighted down on the bottom with lead.

This morning I wished Ron good luck after telling him that I hadn't caught anything, with a big smile on my face, after having enjoyed a quick early morning session out on a beautiful morning. With flat glass-like and crystal clear water, and tons of bait swimming around I may not think today is a clam- soaking type of day, but hey, I'm a fly-fisherman, what do I know? And I say that with my nose turned down.
Posted by The Average Angler at 8:02 AM