Even though I can't ID this baitfish I found on the beach this morning I can tell you that's what the birds and bass and blues are eating. The fish is a member of the herring family. A YOY (young of the year) fish that came from the spring spawn. The question is why is it thick on the beach the last few days and why are the fish on them.
Three days ago Central and Southern New Jersey got walloped with rain. The totals came in around 5-6 inches over a short period of time. Those waters flushed out the tidal ponds (and rivers and bays) carrying with it smaller fish that were either caught up in the currents or were just coming out on the next big flood from rain or tides.
Two days ago the bass bite improved greatly near those tidal ponds and outflow pipes. I also noticed three nights ago having a good night bite near one of our local inlets.
Yesterday I caught an all out bass blitz at dead low tide just outside the sand bar. Bait, which I thought were sand eels, was being flushed out from the pockets and troughs and getting hammered from the birds above and the bass below. I managed several bass on a sand eel pattern, but Monday-morning-quarterbacking it today I wish I had tied on a small baitfish pattern, like the one  below.
Today I found the above fish on the beach as the birds hovered and picked as the tide ebbed. I also saw some swirls and a few blow ups but they were out of fly rod and even spin reach. Low tide was at 917 am, and I had been there for dead low yesterday, but not today. I had to be off the water by 8 am. So I watched and waited and made some casts early with a popper and later with tiny baitfish patterns without a bump.
On my way out I saw a few friends coming off the water and we talked of the bass that we caught, or didn't catch, the birds, the dolphins, and the bait. We also noted how cool it was and how it feels like fall is coming early. Then we looked at the above picture.
We determined it wasn't a sand eel. We got that. But is it a peanut bunker? Alewife? Blueback? Gizzard Shad? I reached out to some friends who couldn't say 100 percent for sure. I also dropped a note to some marine biologists I know to get there take on the fish.

Even though there wasn't much fishing this morning there was a still an adventure that will continue until I ID this fish, and figure out when and where it came from and if the big rain played a part. 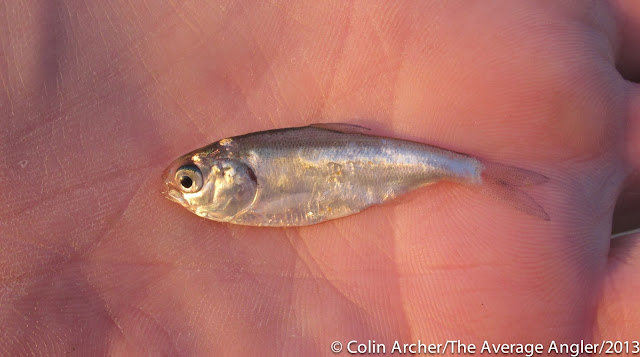 Posted by The Average Angler at 6:30 PM