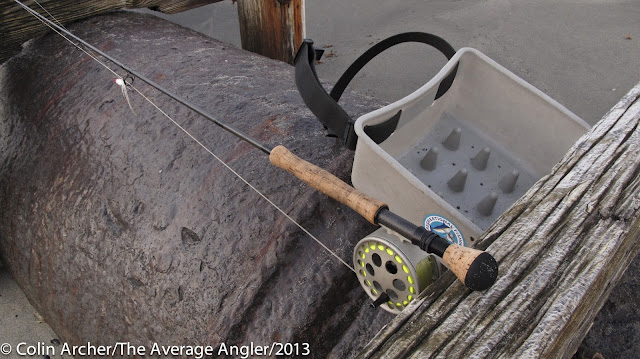 As I ended my night I spotted a fly rod and stripping basket perched on an outflow pipe. At first I thought it might have been my buddy Joe's because of sheet foam popper that was tied on. I looked around and then spotted its rightful owner up the beach, with his second rod in his hand. It was Al who brought along a plugging rod to mix it up a little. 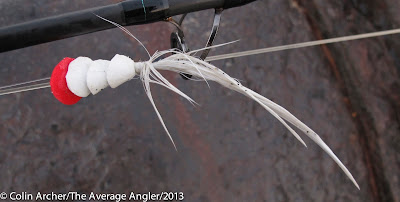 I tried to repeat last nights efforts, and may have been on the bass, but I didn't have a blow up, splash, or take to confirm this. I tried new towns last night and got out around 1 am. At my first stop the surf was still big just coming off high tide and the waves were breaking on the beach side of the trough, with enough force that could knock you down. I first heard the talking, and laughs, and playful screams coming from the beach next to me. It was kids playing around, but then the started playing in the water. The guys would pick up the girls and carry them into the water. A nervous pit started to form in my stomach. Kids being kids. But here I am not going much past 1 foot into the big water and they're frolicking in it. I must be getting old. I almost said something, but then I just left, hoping they would make it have safe.
I traveled south and fished in the NW wind and light rain. Because of the bigger winds and water then the night before I did bring two rods and mostly was working Pulse Disc led flies underneath. It is amazing how much action those discs add. As you slowly retrieve in working a rip or backwash, the vibration carries all the way up to your hands.
As the fainest first light started to show I moved back north knowing there was one spot that wouldn't disappoint on the end of the ebb tide. I made it there still in the dark and quickly went to work. And you know what....not a bump.
What made my night was seeing Al's rod and basket and him way up the beach working his popper in the wash. He said he had a few fish move on it.....and that's a great way to start the day. 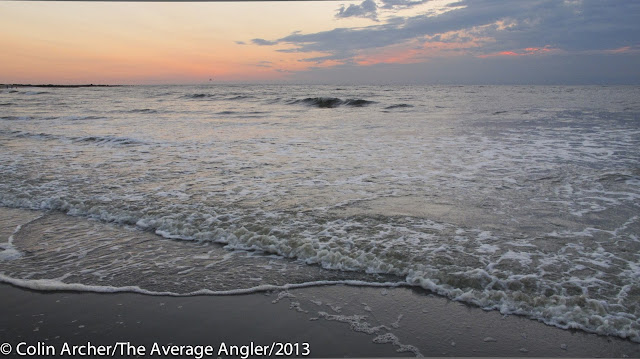 As I always tell my clients or during presentations, scout, scout, scout. Below is a short groin that has gone through some serious changes since Sandy. The below picture was taken this morning, showing how south side shoaling occurs because of the longshore drift.

After Sandy all of that sand was gone and it had become great structure to fish. There was a deep pocket and the fish would just camp out there looking for food on the right tide and time of day. Below is a picture of the same spot taken in March 2012, which was six months after Irene and six months before Sandy. It shows the structural changes (rock disbursement) resulting from a storm and also the natural movement of sand along a beach. This is one reason why I believe "beach nourishment" is a bad idea. Mother Nature will put her rocks and sand where she wants in her ocean. Period.


Posted by The Average Angler at 5:26 PM