Would this have been a World Record striped bass if line caught? 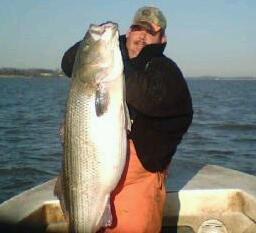 So today I am in class and I start talking with a fellow student and he tells me a story about a huge 96 pound striped bass that was caught by a guy he knows while netting bunker off Barnegat Inlet in early June 2011. I remember some chatter on a few forums last June and I poked around a little little looking for a story or picture that goes with it. Luckily the guy had a picture of it on his cell phone and he forwarded it to me and gave me permission to post it. As the story goes after the angler got the fish out of the net he called authorities who came and took the fish. I haven't found any other info on the catch and will research it further.

As of that time the World Record striped bass was still Al Mc Reynolds 78 pound fish caught in Atlantic City in 1982. Then in August of last year Greg Myerson caught an 81 pound fish in Connecticut waters.

The current IGFA World Record striped bass taken on a fly rod was caught by Richie Keatley of Norfolk Va. on December 17th 2010. The fish weighed 51 pounds 5 ounces and caught on a 20 pound tippet.

Tonight I took a ride down to 8th Ave and found the water too low to fly fish. While I was out on the rocks this guy tried to take his "beach buggy" out on the 8th Ave beach. 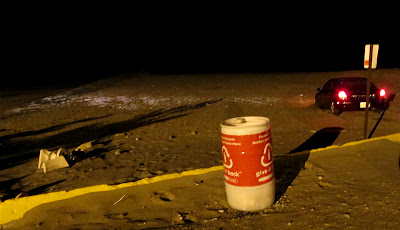