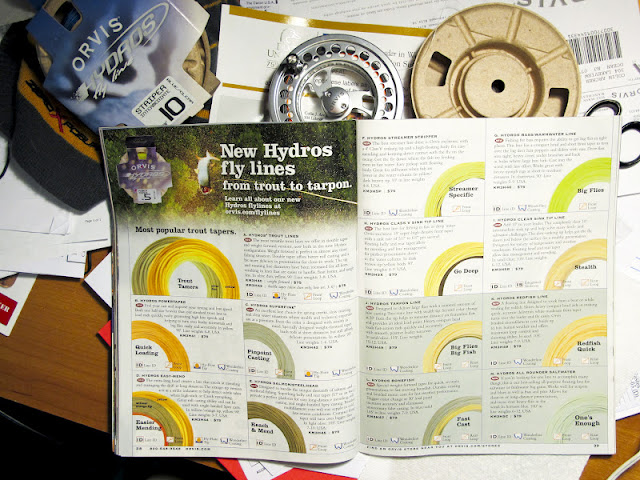 It's been a long tough year on my saltwater fly lines. Last week while fishing the rocks at night I made the lethal mistake of trying to clean up some line in my striping basket as my fly dangled just above the rocks in front of me, or so I thought. Over the next minutes Joe watched me as I broke my ass and took a bath trying to get my Depth Charge line from out under and from in between two mussel covered rocks. In the end I had to pull the line and it parted.
I have since inspected my fly lines and need several replaced. When clients, and then myself, fish them as often and as hard they are, replacement once or twice a year may need to happen. In addition to the fly lines, the backing should be inspected and checked. The last thing you want to do is have a large fish run you out into the backing only to have it stop suddenly.
There are several fly line manufacturers out there, and each offer different lines varying in weight, taper, length, and color. In most cases the fly lines are made by only a few companies, and then the other companies tailor those lines with certain tapers or coatings. Hence 3M and Airflo may make lines for themselves and other companies, Orvis, Cabelas, LL Bean, ect.

Hopefully you made some good use of your time at the recent fly shows. In addition check out some of the trade magazines that review fly lines. Also, the companies have websites, and some, like Orvis, put both the good and not so good reviews up for the consumer to read.
Posted by The Average Angler at 6:52 PM