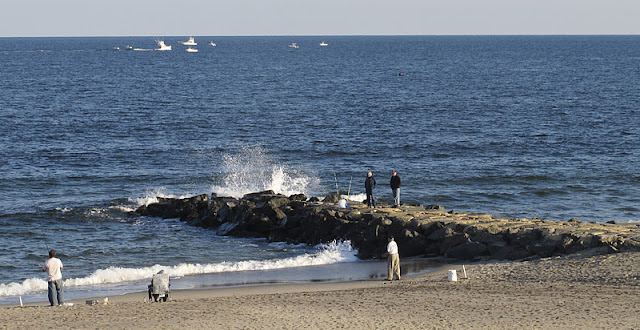 Where ever I go and ask about the fishing guys usually just stand there rubbing their heads. I've been out mostly for first light, today I decided to give it a go late afternoon as the tide starting going out. I drove the bus if you will and hit all the local stops. Asbury Park, Allenhurst, Deal, Elberon, Long Branch and Monmouth Beach. I gave the Shrewsbury River a look and stopped and talked with two guys taking a boat out in Little Silver. They had two shorts after working for quite a while. I did hear that three keeper bass were caught this morning to 17 lbs on clams and eels.
The above picture is off Long Branch. I watched for a while and didn't see any action from the surf anglers or boaters. I went back down to Allenhurst and fished the rocks there without a bump. One guy caught a large skate while soaking clams.

Schoolies are around but you have to work for them, keepers are hard to come by, and the bait hasn't emptied out of the rivers and the bass haven't come over from New York. There's a mention here and there of some bunker sightings but nothing consistent.
Posted by The Average Angler at 7:20 PM