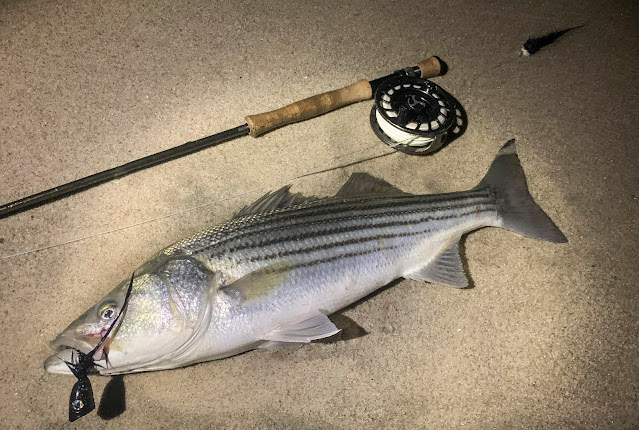 Happy Father's Day to all the good men out there, including my own father, brother, and brother-in-laws. I was able to spend time with my kids yesterday, and this morning hit the beach while my family slept. I am glad I was able to get down to fish because tomorrow I'm driving down to Florida with Erin and my mom as she bought a place in Bradenton. I let Dave Choinard know I'd be in the area and he said something "about jumping some poon", so we'll see about that. 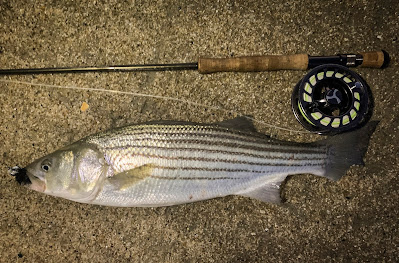 This morning was just fun. First cast, keeper fluke that grabbed a big Snake Fly. Second cast the above fish smashed the lead Howitzer popper. I wasn't going to leave fish to find fish but I wanted to go and stand on Ryan's Rock for a little while. Not that he every gives me any fish there, but just for a few minutes I can remember him and his ashes I spread into the ocean on Phillips Avenues. I visit this spot every Father's Day.  That's his rock below, front and center. 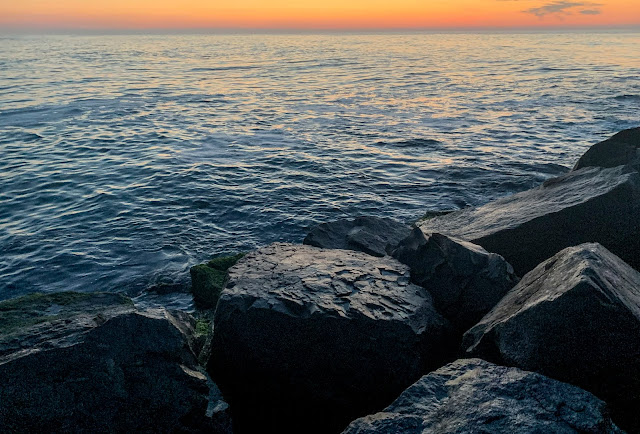 I fished his rock, and while I always hope to get a monster there, as some kind of sign he's with me in that moment, as usual, I don't get a bite. It's kind of a running joke now. But sliding down to the pocket where the manageable south east swell met the beach end of the groin was like shooting fish in a barrel. 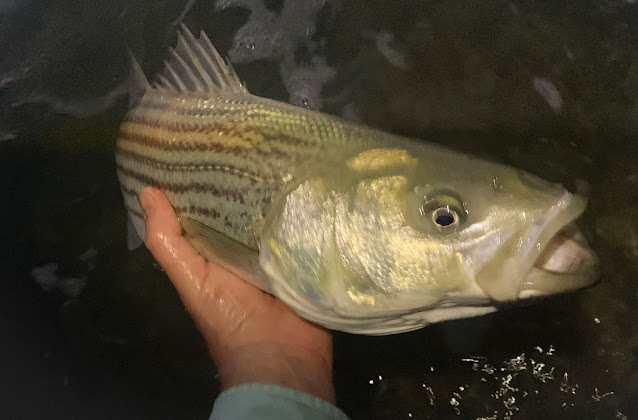 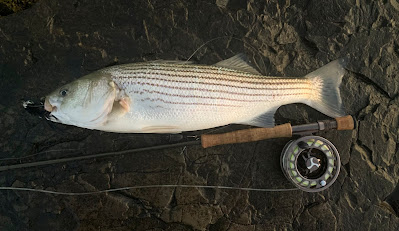 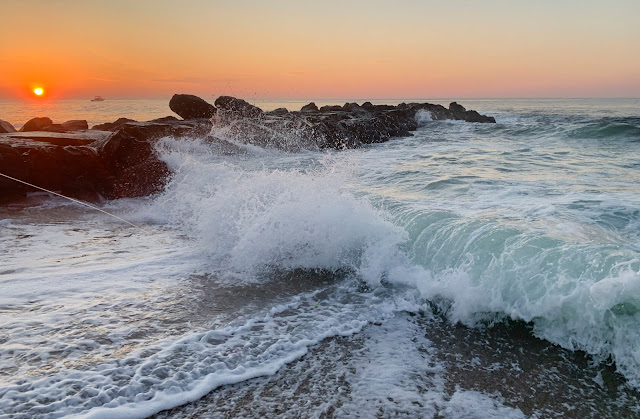 As long the water held in that spot the fish are there patrolling, and hitting anything I threw at them. Black popper, check, black Snake Fly, check, small black Deciever, check, I even went to the Ugly Ass Fly to show them something different, and check. The fish weren't big, but they were good fly rod fish. 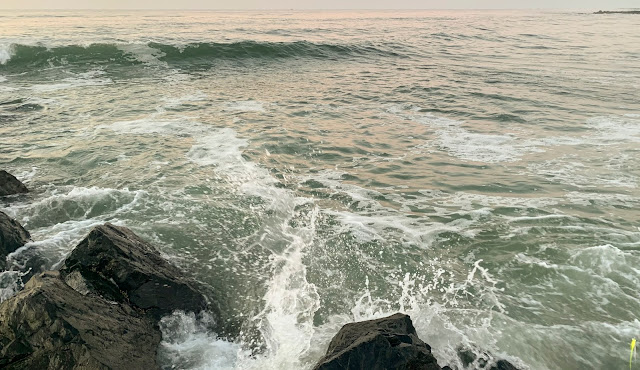 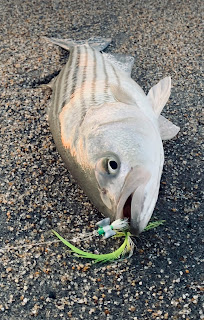 Spunky, chunky, and the ones you have to go on the reel to fight and pay attention when you are landing them no to get broke off as the get sucked into the current from the outgoing water into the trough. Leif and Joe enjoyed the same success and I let them around 630 so I could take the ride west 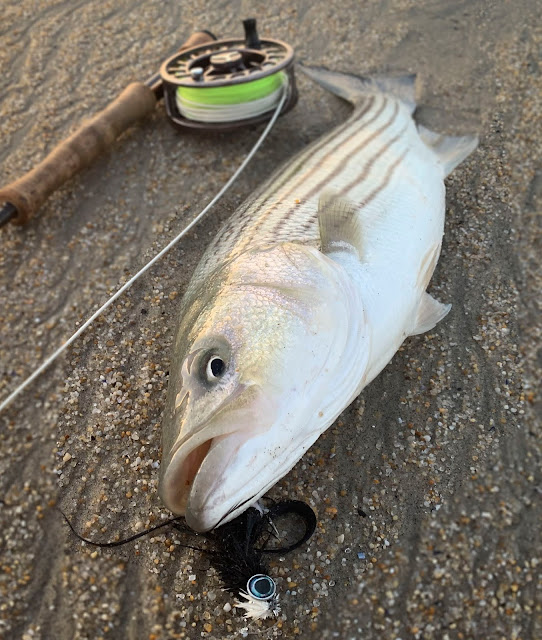 on 195. The continued searching for bass and fluke with the crab flies as we saw several small mole crabs on the beach. Its good to see the fluke start to show themselves in the mornings, as they are always an added bonus by-catch. My keeper this morning would have been tasty, but catching it just before 4 am and knowing I wouldn't be home until 9, had be thinking it best to get let it go to grow. 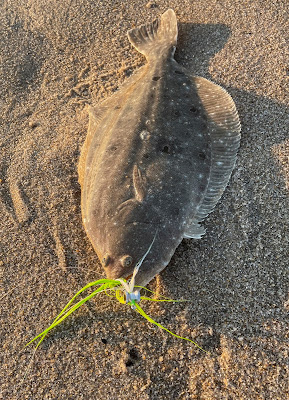 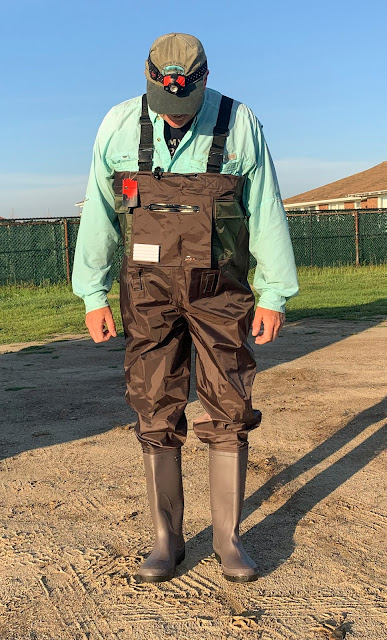 And in my counted search for affordable yet durable waders I arrived at the above pair of Runcl's. I found these on Amazon, $58 with tax and free delivery. I returned the pair of Frogg Togg's to Skips in Stockton as they just didn't wok out. They were great and gave me a full refund, I showed them pictures of me taking them off after fishing Red Beach in the Vineyard. I didnt wear them this morning as I knew I would be on the rocks, but after some time in them I'll let you know what I think.
On the way home I was tempted by the Delaware. Early incoming tide and the water hadn't flooded the water in Trenton just yet. I found some deeper water and gave it a go without a tap. I called Joe "Chevy" to wish him a Happy Father's Day and of course we talked stripers. He said there's fish all summer and it gets good again in September, when the herring and shad fry make their way out to the ocean. By then the summer water temps have dipped a little bit and the bass come out in force to eat the small offerings that are making their migratory journey. 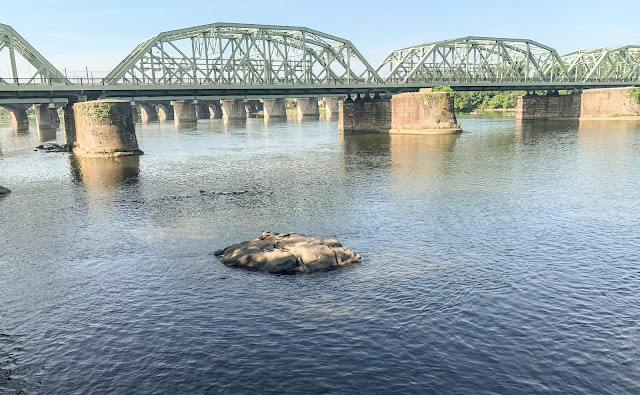 Posted by The Average Angler at 12:50 PM