So I get home from work and share with Theresa  these Upper Delaware photos that I've been getting from Leif the last few days. Nice scenery, big fish, and March Browns!!! My favorite hatch. As she scrolls she sees and open invitation for me to join him. I wasn't working Wednesday and my next "thing" is class on Thursday at Monmouth University at 430. Mmmmm...... So what does a great wife say ?. "You should go.....you'll be up there by 11pm and can fish all day tomorrow and Thursday morning and come home for class".

Sometimes I don't know whats worse a spouse that tells you you can go fishing or one that tells you you can't. I actually talked myself out of it. I had school work. I have to pick Erin up from and take her to school. I have a lunch date with my daughter on Thursday. It'll cost too much money. But finally, the deciding factor was, if I wasn't going to Martha's Vineyard in 16 days I would have went. Enough with the dumb fishing already.....reality check.

Besides the stripers are going to be in good tomorrow morning.

So I text Richie with my prediction for this morning. It says it all. I was confident. 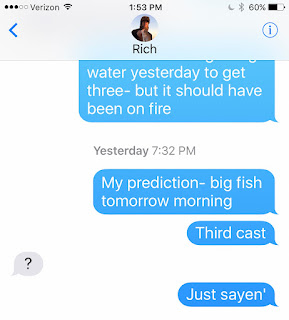 So I wake up at 350 am before the alarm that was set for 410 goes off. I am out the door and on the beach at 430. Two hours left in the ebb tide. On cast number three I held it just a tad longer just in case something in the trough was interested.....nope. By about 30 minutes later I knew my prediction was wrong.......dead wrong. I fish hard big flies and little flies and not even a tap. Rich and Andy were out and nothing for them. I ran into Greg and Morgan with the fly rods and Morgan landed one before I got there. I found sweet water all day, good-moving-should-be-fishy water but not a nothing. 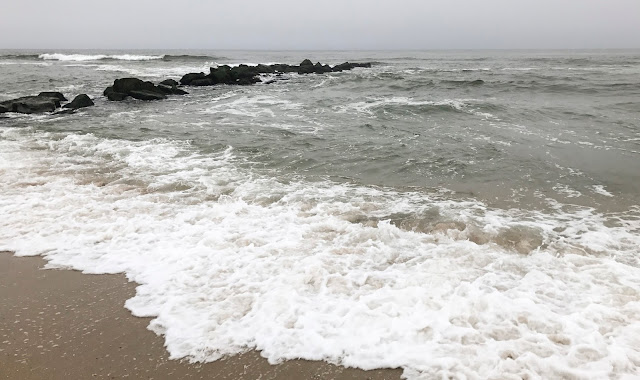 I left around 630 and headed north checking some spots as I went. After coffee I thought about waiting for the river to go slack but made my to the Hook. The east wind has been depositing mans waste and debris up and down the Jersey Shore for days. I'm tired of walking through garbage on the beach. When speaking with Greg about their trip to the Cape for the Cheeky Schoolie Tournament he said, besides all the fish, was the fact they saw no garbage in or near the water wherever they fished. 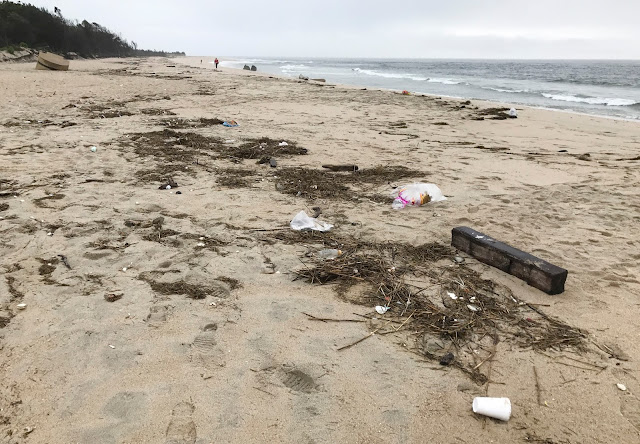 Still wondering if my total prediction was wrong, I decided sitting at the Sea Bright bridge to go straight and not make the right towards home. I was back, the water had been coming in for two hours......it was gonna be good. Forget it. Walked and fished and fished and fished until 1100 and then I gave up. I shoulda went to the Catskills.........

Posted by The Average Angler at 2:21 PM