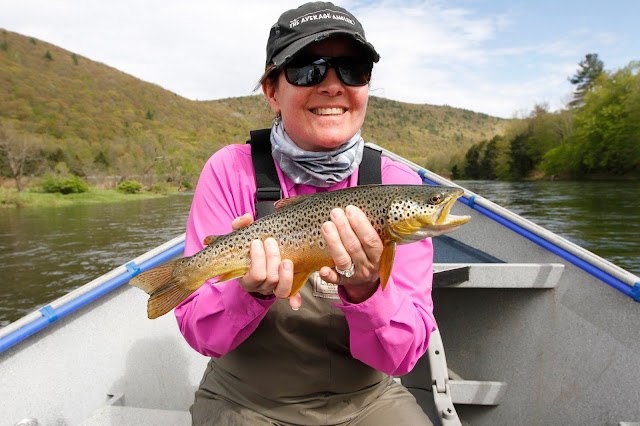 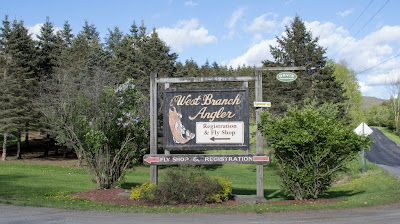 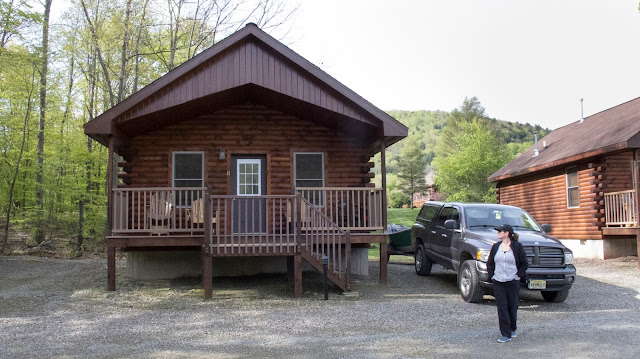 We crammed a lot of fun into 2-1/2 days. Got up to the West Branch Anglers on Monday late afternoon and the cranking winds were still in effect so we decided to just lay low. We sat by the water at the resort and then caught a bite to eat at Koos-Koos in Deposit. 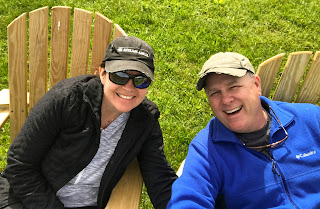 We were up early for the breakfast and decided to float the middle West Branch. I'm not connected daily to the Upper Delaware like when I was guiding so I just took a shot and we went with it. It was a good call. We had lots of bugs, mostly caddis, and the end of the day lit up before we took out. Lots of boats on the water, lots, and some questionable guide and boat tactics went down. Low holing, rowing back and forth across the river to rising fish, and washing ones boat in the ramp when people are waiting in the dark were just some of the disappointing things. 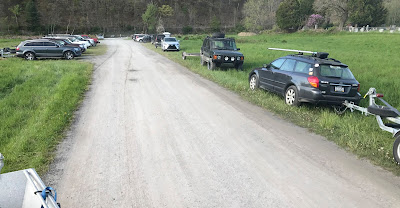 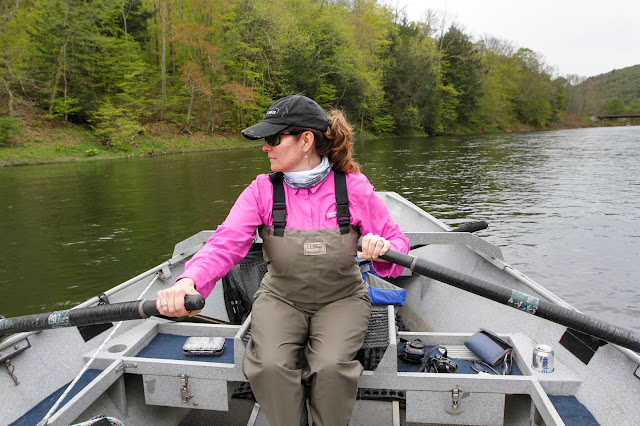 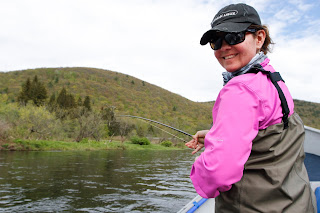 My partner was great. Got behind the oars for a bit. Did a lot of casting and was much more patient then I was. The bugs were up as soon as we launched and quickly found risers that lasted most of the float. We flossed a bunch, broke off a few in the quick moving water, missed a bunch and boated a bunch. Theresa held her first wild Upper Delaware trout for a few seconds which was a HUGE accomplishment. She had the patient of a saint as I fished hard and long when we entered the stretch under the eagles nest around 7pm. We got there first, had a few fish, and then the floatilla arrived  and we decided  we'd take at first and call it a day. Wasn't easy to do but it was a good call.
We had a late dinner at the WBA and enjoyed trading stories with some Facebook friends and guides I hadn't seen since the ONE Bug. 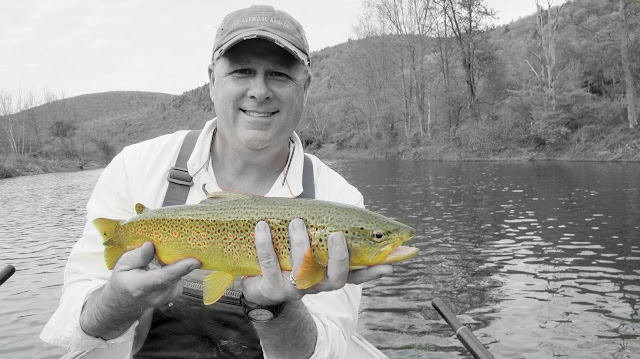 For day two the weather was a little different. Day one was cloudy and a little cool. Day two was hot in the high 80's with high bright sun all day. I figured word was out about the West Branch so we took a shot on the upper Main. Bt first I had the genius move of the century. I went to the Dollar General in Hanckock and got a beach umbrella with a base for $23.00. Perfect. Filled the base up with water and had a few zip ties hold it in place end it was comfortable and easy sailing all day. 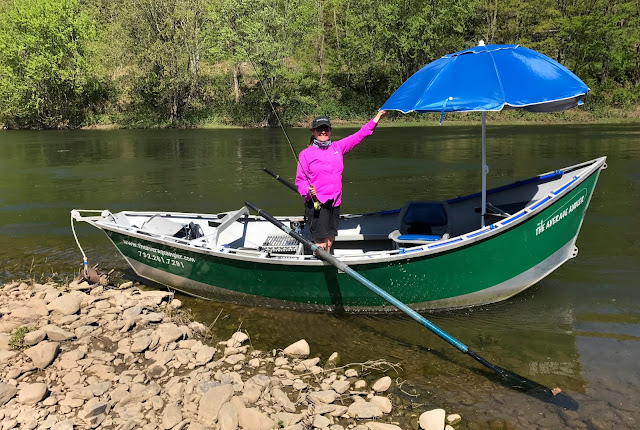 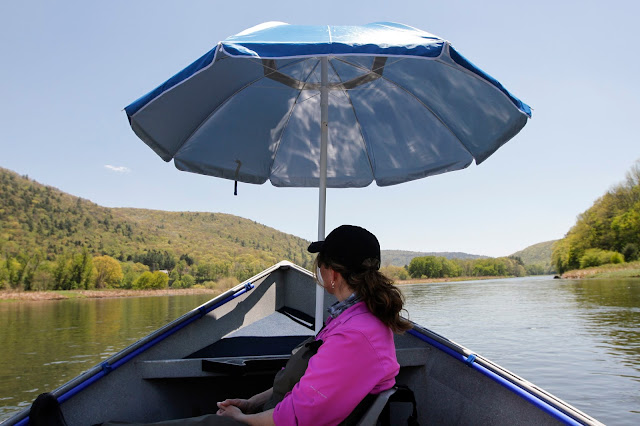 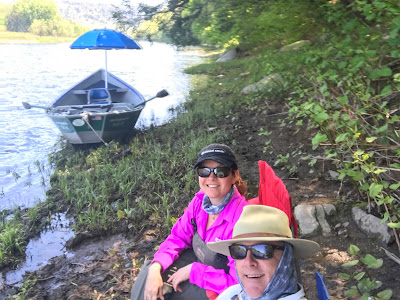 Pretty quickly I realized we were going to be alone most of the day. Everyone else must have had a different idea. We put in at 1230 and held back as often and as long as we could waiting for something to pop. It never did. A few bugs. A few one and done risers but that was it for us. We enjoyed a nice stream side lunch and watched as a few friends passed by. One with a broken paddle who had to work hard the rest of the day to stay straight. We offered him a ride but he declined. 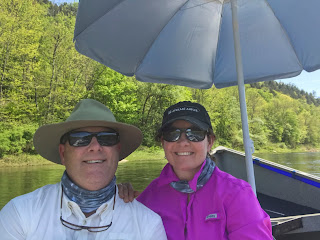 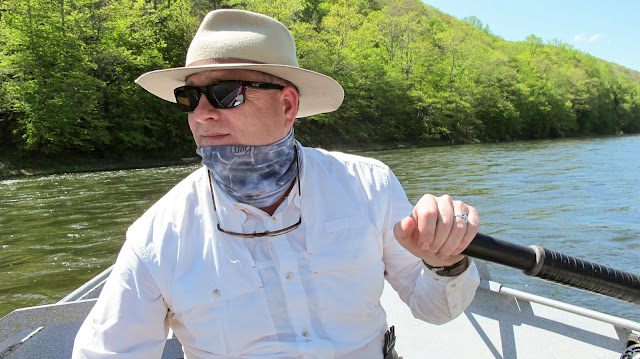 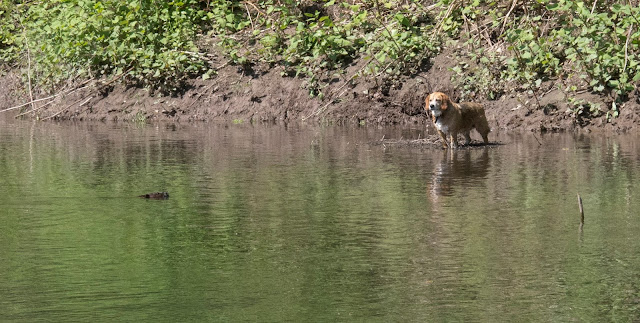 Entertainment was provided by the true "Barking Dog" down on the Main Stem. This beagle barking for hours, protecting a beaver hut from the beaver that built it and lived there. It was funny to watch, but them the deep-bellow-barks got annoying. The only shot we had was, of course, right before take out at the "Last Chance" pool. Trout and chubs eating on the occasional bugs. I did see a few March Browns, and floated them nicely over rising trout but had no takers.

While it was slow it was nice to be alone on the river. It was nice to not hear the traffic, not see other boats, and not have a traffic jam at the ramp. I tried to complete Theresa's boat training but after a few turns at the ramp she was done. As always not but great things and a recommendation for the West Branch Anglers. Yes, compared to other places, or your truck, it can be a little pricey, but to me, especially when your with your partner, the comfort and access and amenities make it worth while. I would love to come back when Theresa and I could just stay there and wade fish and not have to deal withe the bigger water and the drift boat. 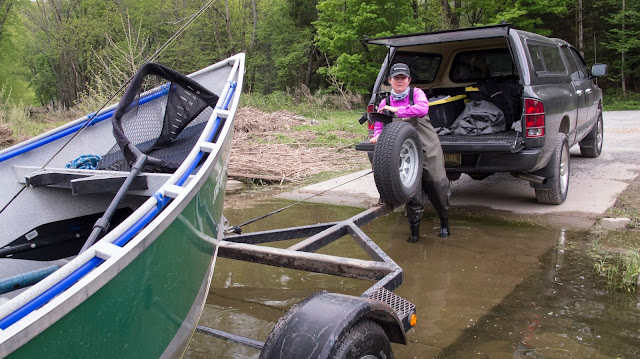 Posted by The Average Angler at 7:49 AM