Let me start with the best quote from the weekend......"You don't look like you do this full time". -  Lamoyne Hyde. (Before we even got to the launch).

Great weekend as usual. The staff at the FUDR, the volunteers, the guides, and most of all the participants made the 10th Annual One Bug a another huge success. There was great fishing before the weekend, and after, but it was tough pickens' during it. Theresa and I started early at Lydia's grabbing a few drinks and a bite before the kick off dinner Friday night. You can't beat Lydia's. 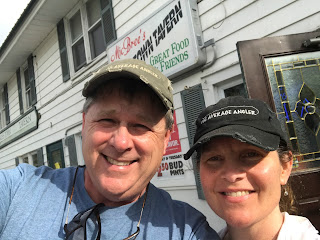 At Fireman's Park the tent was set up and it was abuzz with last minute preparations and Mike on the grill making sure the food was just right and it was. The appetizers came from The Bakery and Theresa was part of the staff walking around and getting people to eat something while they looked at the live and silent auction offerings. I had my sights set on a striped bass (of course) print on canvas by Mike Savlen and I started the bid on paper at $60. I checked during dinner and it was up to $120. I 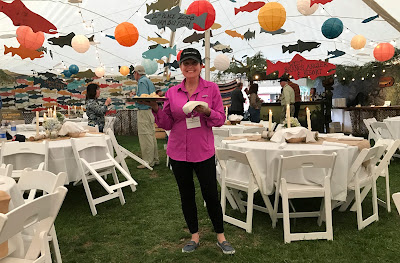 though about going higher but I didn't. A little while later it was at $130. I brought T over and asked what she thought, "It is beautiful....and it is for a good cause." SOLD. I went to $140 and sealed the deal just as the auction closed. It is really nice and will fit well in my man space. It was fun to see 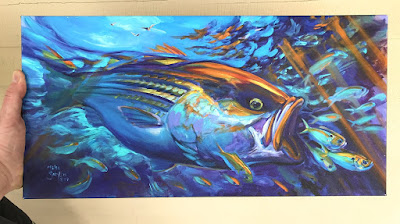 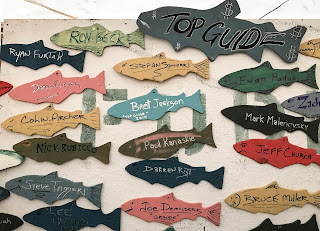 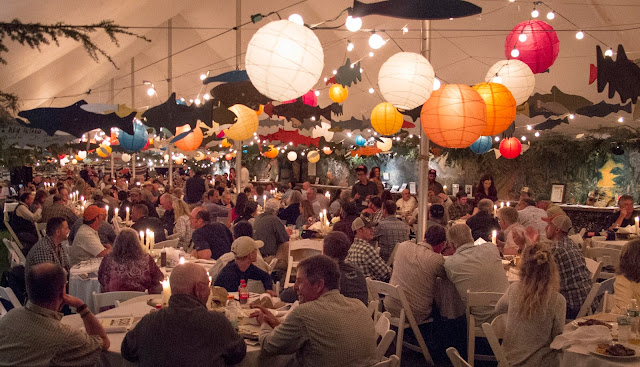 everyone after the two year break that I took from the One Bug. There were more people on Friday than I have seen in the seven years I have attended. Coz did a great job with the live auctions and I jumped in as his Vanna White walking some the prizes around. The big winner was TU and Jersey guy David King who won the 10th Anniversary Hyde drift boat. What a return on investment for a $40 dollar ticket.
Both days I had great guys in the boat. On day one it was Tim and Bob. Two Upper Delaware regulars who knew all about the river and knew exactly how they wanted to fish that day......dry or die. My beat was on the upper West Branch and it was 46 degrees and running 1,650 at Hale Eddy. We did a lot of talking, and waiting and watching, and for me back rowing as the tailwind kicked up as the day went on. Meeting new people while fly-fishing is something I love about guiding. 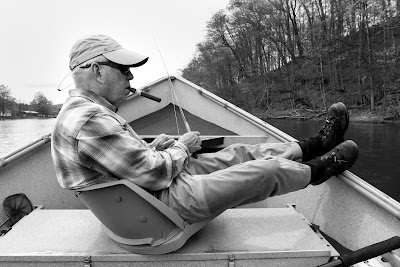 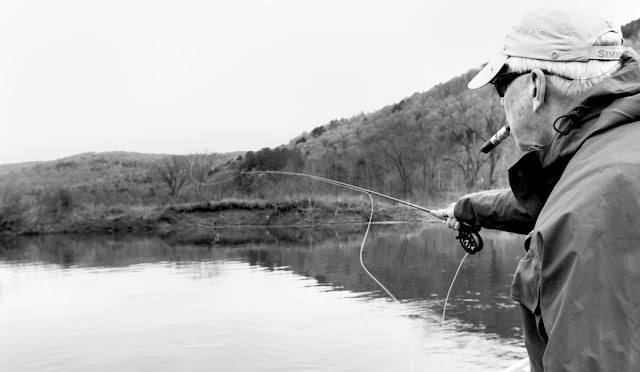 We stopped for lunch hoping to hold back a bit until, possibly, things warmed up and the bugs came off and the fish looked up. We went one for two on the day, setting up and perfectly executing on all cylinders to put a nice 7 inch brown in the net......and that was it. We saw about 10 bugs the whole day.  It was a pleasure fishing with these two guys on a slow day. 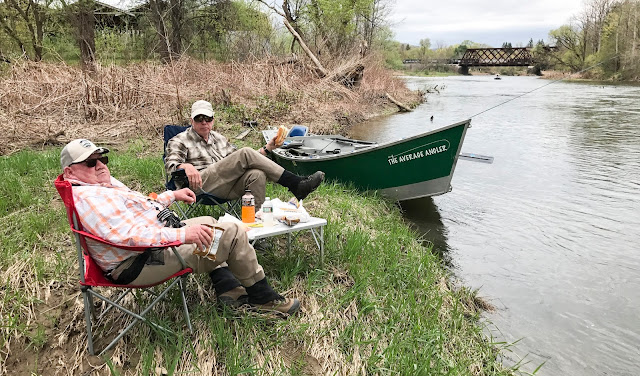 Theresa was a champ and not only helped before and after the days fishing she also ran my shuttle.  After day one we were all set for dinner in town. We got off the water right on time and found a good 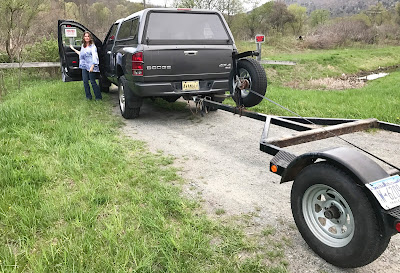 parking spot in front of the Two Sisters Emporium located right next door to the FUDR headquarters. We got a seat at the bar and mixed it up with people as they came in. Surprisingly, it was slow throughout the system, with Brett Jackson and JC having the high hand and hot day, landing what would be the biggest fish of the weekend, a 23-1/2 brown on the East Branch on a dry fly. 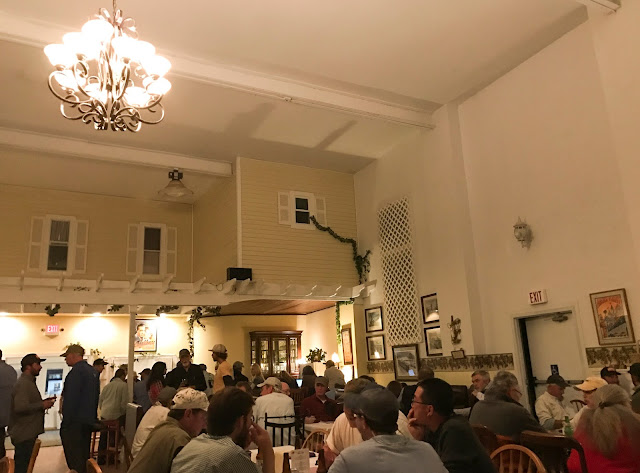 While the setting of dinner was great.......lets just say I'm sure the owners would like a redo. They were just overwhelmed and maybe under gunned. By the time we left at 1330 we were all looking forward to breakfast at the Circle E in the morning.

On both days we started things off at Coz's and Jeff Bump's place at the 191 Bridge. It was a good place and next year we will all have it down pat as far as the flow and the parking. I made a couple of group shots unfortunately not everyone that guided or fished made it into the picture. Theresa and Sherri handed out the days lunches which came from The Bakery and where a nice change-up from the monstrous Circle E subs from day one. Luckily I picked up a few extra snacks to keep the guys busy while waiting on the water. On day two I had another two great guys, Tom and Lamoyne. Lamoyne Hyde is the founder and owner of Hyde drift boats. It seems like the largest percentage of 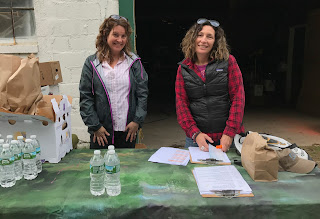 boats on the Upper Delaware are Hyde's. Not my boat. My boat is a 1995 aluminum RB Boat. Lamoyne is both a perfect gentleman and a chop buster. As I walked his gear over to my boat I couldn't help but get the first something in saying, "Well Sir, now you finally get to fish from a real boat". What else could I say?
Lamoyne was here with his wife Jan who was his partner and was fishing in another boat. As I drove up Route 17 we started small talking. That's when Mr Hyde dropped the best quote of the weekend, "You look like you don't do this full time?" What? Was it the nursing talk or am I that bad, and that was before I even launched or got behind the oars. The three of us had laughs all day. 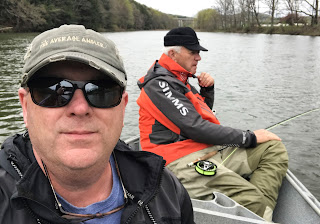 The river dropped to 1,100 over night and we did have bugs. We sat up top for a long while and finally had a few risers and they each had one to put on the board. I have to say, after hearing about all the things good about Hyde drift boats, and politely that there was no reason to have a boat like mine on these rivers, and I was convinced that I would sell my boat and put money down on a Hyde. And after me and Theresa's  West Branch Angler's trip in a few weeks I just might. A Salmon River guide would love my boat as it's meant for big water and to bounce off rocks with ease.

The last nights dinner was at the Riverside Cafe on the banks of the BeaverKill. Great spot, great food, and luckily had us pointed in the right direction heading back to New Jersey. If you are up there and want some real and good food than this is a must, especially if you are with your lady, or guy. 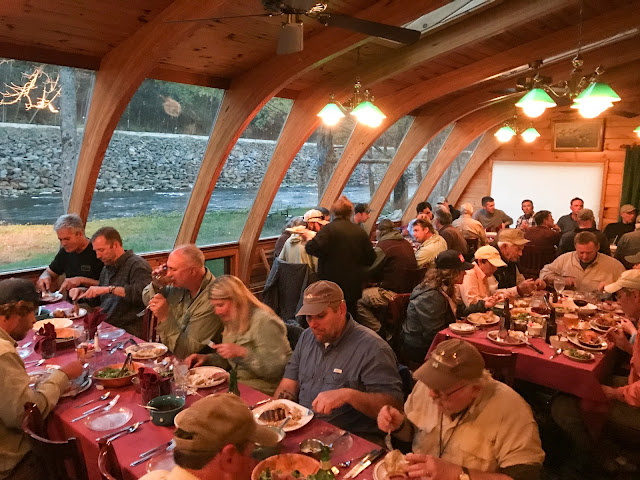 We didn't stick around for the awards, but Ryan Furtak won the top guide award and Brett Jackson won the Squirrel Award.I am proud to say I am a two-time squirrel winner. I forgot to share that with Mr. Hyde, lol. 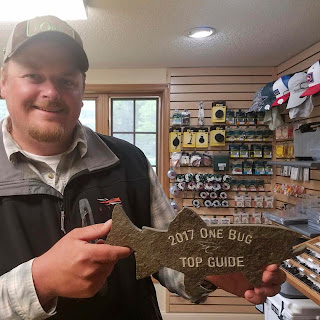 Posted by The Average Angler at 12:51 PM