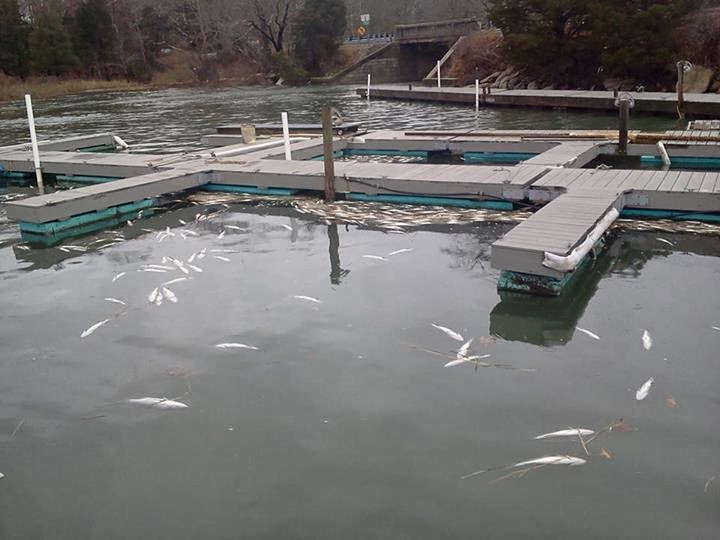 Over the last few days we all know the northeast is going through a polar vortex....whatever that means.....I know it just plan cold here down the Jersey Shore. Before the freeze we ended 2013 with a pretty good striped bass bite, with bigger schoolies from 20-25 inches and an occasional 26-30 inch bass caught. After 2014 rolled in a few fish were caught by both fly and spin anglers that I talked to. I on the other hand have yet to catch a fish this new year.

I was wondering what the effect might have on the resident bass that we have grown to love to catch over the last few years. The migratory larger fish have went south for the winter and these smaller Hudson River fish aren't making the move south or way up into the Hudson in those deep stretches above the Tappan Zee Bridge.

Yesterday I had heard of a fish kill occurring on the Connecticut River. Hundreds upon hundreds of schoolie bass to 30 inches were floating out with the tide. Today Dante Soriante posted a picture on the Surfcasters Facebook page that was sent to him from a friend. There's a couple of theories "floating" out there as to what happened. Did the freshest part of the brackish water freeze up driving the bass out into colder water? Did the river just become too cold? Or, another theory, that towns were permitted to dump snow and all that goes with it - sand, salt, salt concentrate- into the river thus killing the fish?

I'm going to investigate further and will write on it when I found out.
Posted by The Average Angler at 6:12 PM