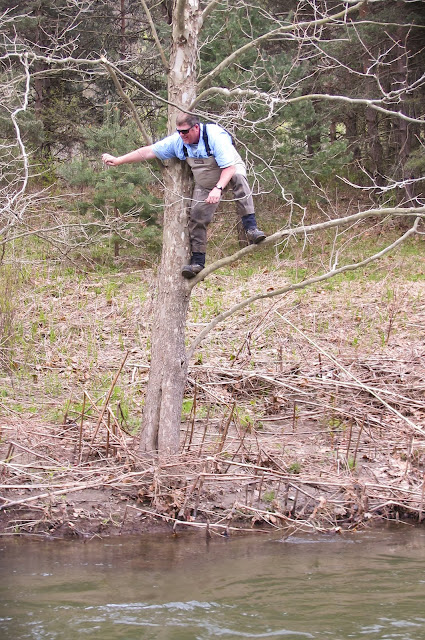 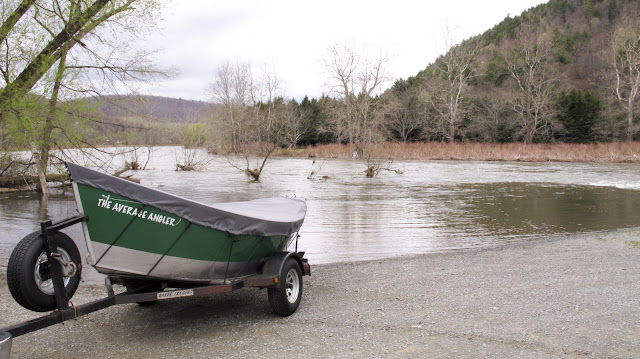 Shehawken, PA launch, West Branch Delaware- Friday April 29, 2011
A lot of us were wondering if they were even going to have it, but the decision to go for it was made so it was game on.  Friday night was the dinner and auction at The Hancock Theatre. All had a great time with good food, drink, and company. That night we were assigned our beats for the next two days. I had the East Branch from Fishs Eddy to Firemans Park. It's about a 10 mile float, and at 7,000+ it could have be done in about 90 minutes, well not that fast, but all of the beats would float much faster than normal. I also was given the names of the anglers I was floating with and was able to introduce to myself to Dave, with Ryan coming in the next morning. Also guiding the event was Charlie Limbert who I first met at guide school in PA where he was one of the instructors. We both stayed at Lee Hartmans place down past Equinunk. After dinner Charlie and I cut out early and we missed the sobriety checkpoints that the law had set up in town. 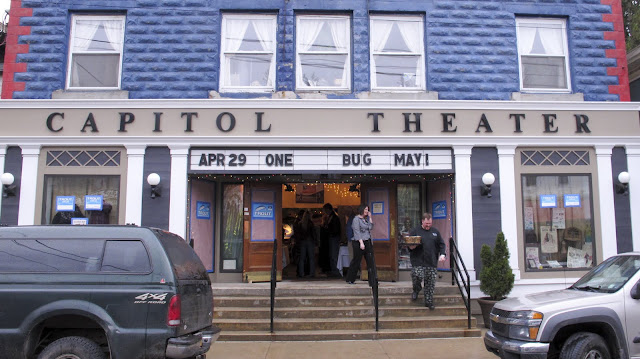 Capital Theatre, Hancock NY before Friday's dinner and auction
We were up early Saturday morning and took a quick drive up to scout the East Branch before breakfast at the Hancock House. After some food and coffee we grabbed the guys gear and lunches and headed to Fishs Eddy to launch. From just before Partridge Island all the way to Firemans Park in Hanock these two guys worked hard to get a fish. They pounded the shore with streamers all day. We moved one good fish and may have had a few tugs on one of the large streamers the guys used. Dave managed a smallmouth that flipped off right the boat. It was tough day on the East and West, with three fish measured between the boats. After taking out and before dinner I went to the car wash to clean up the truck and boat. Saturday night was dinner and drinks at the Bluestone Grill in Hancock. I was beat and Charlie and I got back to Lee's by midnight and grabbed some sleep before the 6 am buzzer got us up. 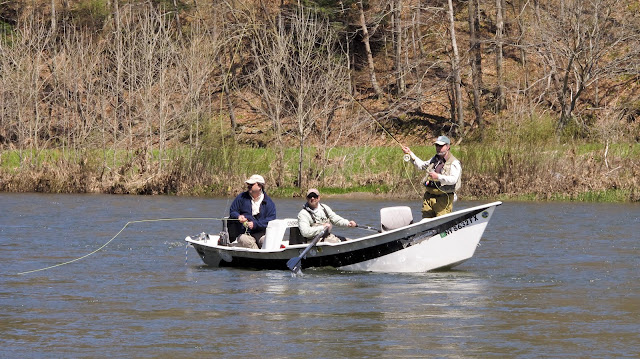 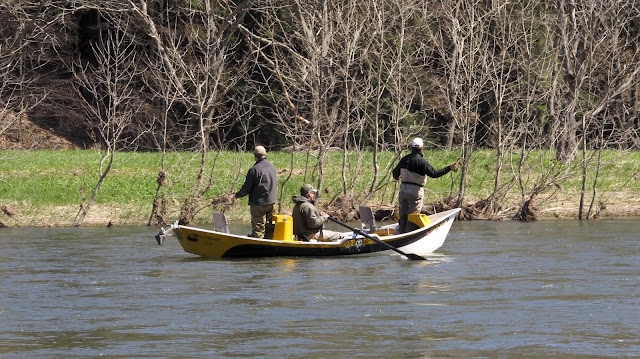 John Enderson with Bob and Dan pounding the banks the streamers,  Sat April 30, 2011 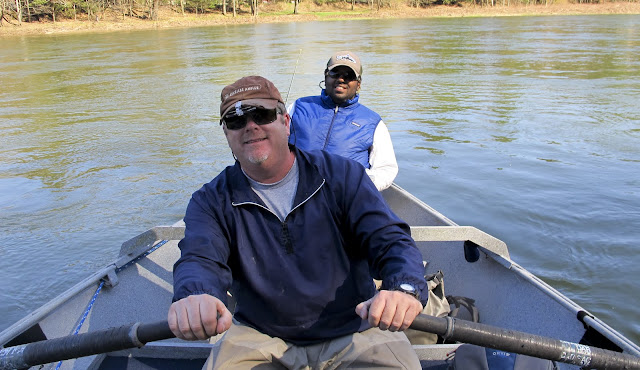 Ryan and I floating the East Branch, Sat April 30, 2011
On Sunday I had two more great guys, Mitch and Dave. I had the same beat as the day before, the only difference was the water had a dropped a bit. It was a tough call for the fly pick. On Saturday most guides and anglers picked big streamers, which didn't work all that well. Since it was down a bit on Sunday, and with bugs on the water, some chose a dry fly. Dave had his fly choice set, an un-weighted variation of a wooly bugger. Mitch was open for ideas. I recommended a size 6 conehead olive/ black wooly bugger, to go with his sink tip on a floating line. And with that the three of us had a great float, nice lunch, good talk and laughs. The boys fished hard. At one point we passed Jeff Church and his anglers netting a 20 inch brown, and seeing that got the blood flowing and the kept us focused. 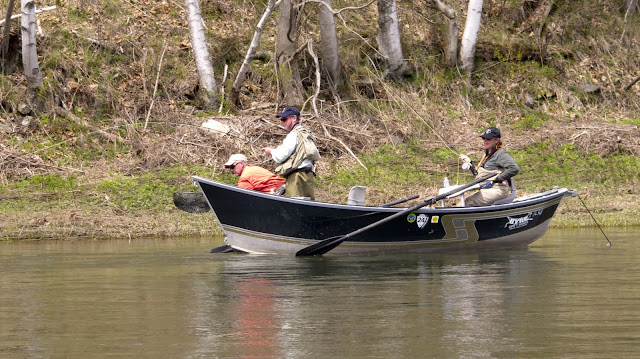 Jeff Church and crew getting a 20 inch brown to net, May 1,  2011
As it got after 4 o'clock, with stop time at 5:30, I was trying to figure out were I could put to really work a section before it was over. After we moved through the Cadosia "Riffles", I noticed a channel off to the left. I backed in to a small island, and let the guys go to work. Mitch was up top and Dave started midway. They were both casting tight to the bank and working the channel nicely. Then Mitch caught a his line in a few branches in a tree on the opposite bank, and they Dave hooked up. I got the net and measure box to Dave and landed his nice 17 inch brown. As I released the fish, I looked up and Mitch had miraculously got his fly free. It was one of about a dozen good saves that day. As I got back up to Mitch, the next branch higher in the same tree had reached out and re-grabbed his fly. This, was an ugly snag. That fly was worth 100 points, plus whatever fish he was sure to catch in the channel after we freed it. After a few tugs, we came up with a plan. I would cross the channel at the mouth, if I could, go to the tree, climb the tree, free the fly, Mitch would start fishing again, I would come back over and be in time to net his fish , and we'd be done just at quitting time. 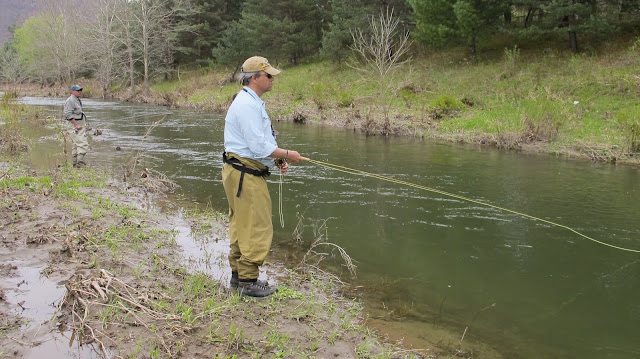 Mitch post fly save with 20 minutes left, Sunday May 1, 2011
Things went as planned and soon Mitch was back fishing the channel. He fished through twice and at 5:30, it was over. We floated down to Firemans and took out before heading over to the Capital Theatre for dinner and results of the point tallying. The awards were given out for most points, best team, best guide, biggest fish, and then Dan Plummer announced a new award this year before wrapping things up for the weekend. He called John Enderson up to the mic for the presentation. 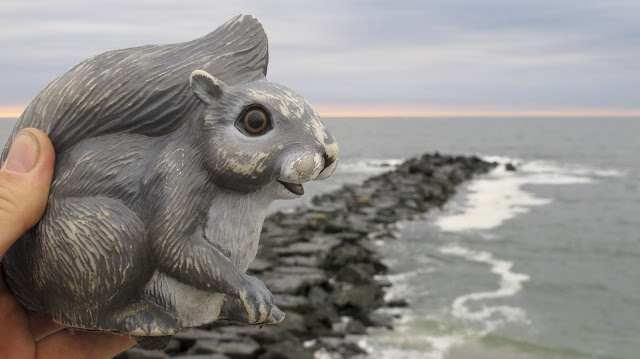 The "One Bug Squirrel", now in New Jersey, scouting for striped bass Monday May 2nd, 2011

On day one John found a yard decoration on one of the islands during his float. It was a small plastic squirrel. He couldn't figure out what to do with it. So for the next two days, both on and off the river, the squirrel made the rounds. After seeing the picture that Mitch had taken of me in the tree, it was decided by the committee that a new annual award would be given out. It would be called the "One Bug Squirrel Award", and I was the first recipient. I need to keep the squirell with me till next years One Bug, where I will present it to next years winner. It was a funny moment and a nice way to end my first One Bug.

Posted by The Average Angler at 2:58 PM