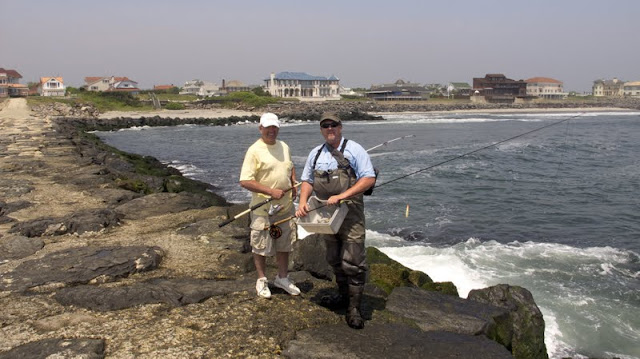 Me and dad at Allenhurst
Well things have been red hot, as you all, and every angler within 100 miles knows. It's great for the meat harvester casting pencil poppers, swimmers, and plugs. Great for the clam and cut bunker anglers. And not bad for the fly fishermen and women.
Today I had the opportunity to take my dad striper fishing. He has wanted to go for some time. I emailed Jim Freda over at Shore Catch to see if he had any openings for today, ha!. Jim said he had an opening in July and a few in August. So we decided to hit the beaches and groins along Monmouth County. We were out at 430 am and started in Allenhurst with a quick scout and moved to Deal to fish. We were all alone and I fished Brighton and hooked up with a nice 15 pound fish at the end of the groin. I fought him to the rocks where he spit the barbless white/pink Clouser.
My dad was throwing a Bomber in the surf and then we moved to Phillips where he risked his skull and walked out to the end with a pair of garden boots. He busted his ass several times but did get out there. We had bunker out front but no fish were on them. We picked up around 830 and headed to Steve's in Sea Bright for some breakfast. I might add, if you ever want the best muffins in the New Jersey, then head to Steve's in downtown Sea Bright.
We then hit Giglio's where my father stocked up on pencil poppers, swimmers, leaders, a shoulder bag and pliers. If I didn't pull him out in time he would have went for a new 11 foot G-Loomis rod and Van Stahl reel. We moved to Takanasee and then settled in Allenhurst and fished the start of the incoming tide. I fished the "cove" at the L groin below the beach club and had a nice fish on for a few moments, I think it was a flounder.
I wish we could have stayed longer so he could have at least seen a good blitz and guys catching those big fish blowing up on the lures he had purchased. We put in a good day, from 430 - 1pm, hopefully we can do it again.
Posted by The Average Angler at 10:05 PM