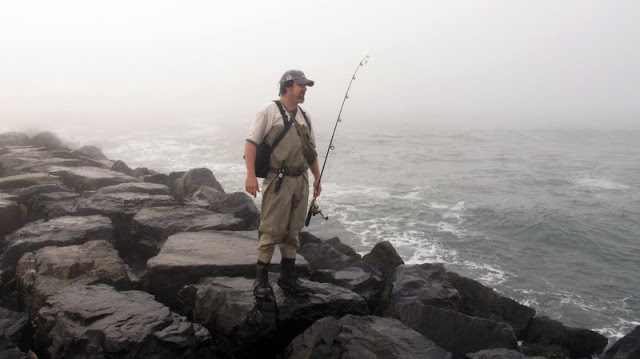 Ryan on Brighton
This morning I got a chance to go fishing with my brother. I am 43 and my brother 38. We grew up as kids fishing together in the ponds and lakes of Millstone where we grew up. We then graduated to the trout fishing waters of New Jersey as we got older. Ryan moved to hunting, I stayed with fishing. We still fish several times a year when we can. It's always fun weather we catch fish or not. 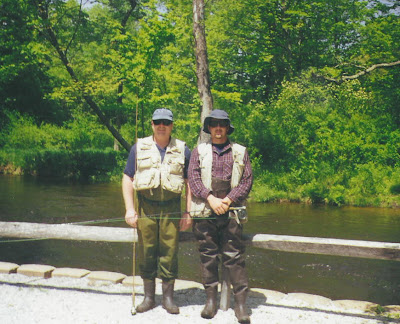 Me and Ryan at the Big Flatbrook 2004 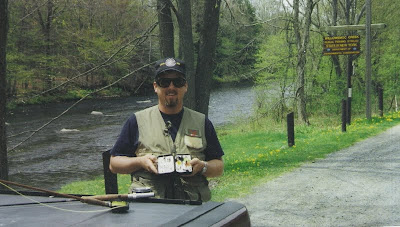 Ryan at the Willowemoc
After he heard about the fishing with my dad on Friday he really wanted to go. Yesterday he went through his gear and took a ride to get new line on his 20 year old fishing pole we bought when we went to the Salmon River in 1991. I know nothing of hardware and bait fishing, so I couldn't give him any advice. The only thing I've heard of is Power Pro braid. I'm not even sure what that means but I mentioned it to him.
So when I pulled up at 5am this morning he was walking back to his truck with a mess of line in a ball. We tried to untangle it, but we just cut off 50 yards of it and went fishing. We walked over to Brighton and waited a bit for the tide to go out so we could get to the end of the groin. Ryan was throwing a shiny new pencil popper. On the third cast his line was fouled again. 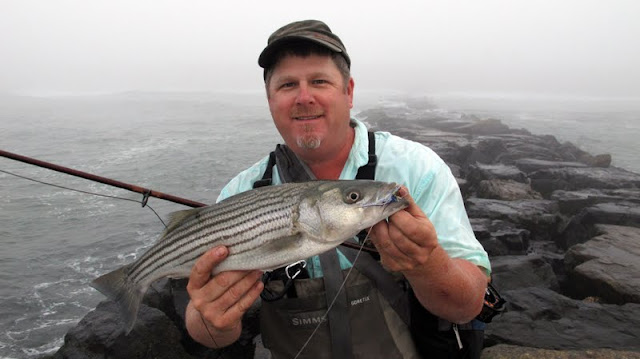 As he was untangling I hooked up with a nice schoolie that Ryan helped me land so I wouldn't snap my rod like I did yesterday. After a few pics the fish was released back in the water and we were back at it. I was fishing, and he was cursing and trying to figure out if it was the line, the reel, or both.
Around 7 am he couldn't take it anymore and called it quits. I stayed there and then moved to Phillips and later to Allenhurst with only a few strikes to show for it. Hopefully we'll get to go out again, and maybe next time all three of us can get out together.
Posted by The Average Angler at 10:49 AM