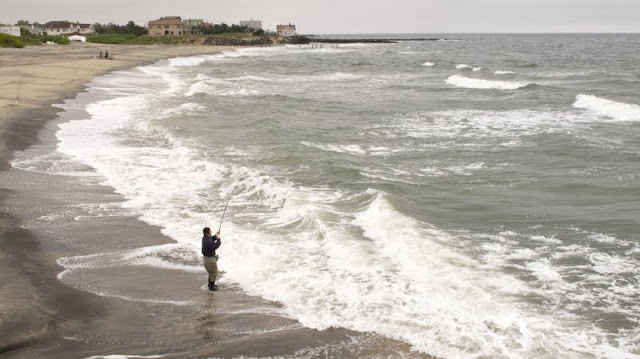 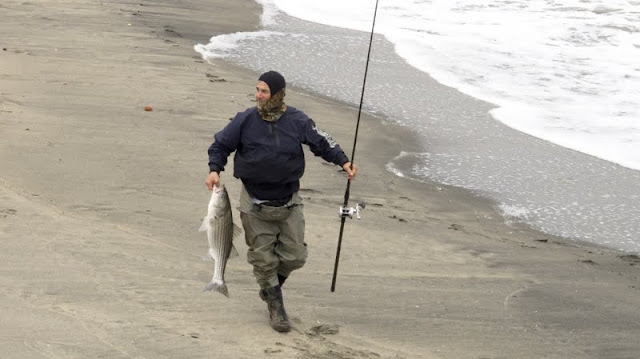 Rich with an early Sunday morning keeper on clams
I couldn't get out early for the outgoing tide so I settled for a quick drive along the mid- Monmouth County beaches. Things were a little different than yesterday, 12 E winds, with the air and sea temps even at 56. I found things quiet in Asbury Park and watched a guy hook up in Allenhurst soaking bait, I wasn't sure what he was serving up. Then I moved north and found the always-fishing-in-the-morning Rich out fishing with a friend. They had a few poles set up with clams and worms. I stuck around for about an hour and just after I turned to leave Rich hooked up right along the groin. After a nice fight he beached the 30 inch fish. With the tide starting to come in I wouldn't be surprised if they hooked into a few more fish.
I also saw a guy throwing flies for a long time in a pretty steady wind with no results. He is a regular who puts in a ton of time and gets rewarded in good numbers on occasion.
My planned float of the Upper Delaware isn't looking good for Tuesday. Around the beginning of the month of May the West Branch was rolling at just under 12,000 cfs. On May 15th the West Branch was 785 cfs and today it was 4,150 cfs- and that is down from just under 7,000 two days ago. 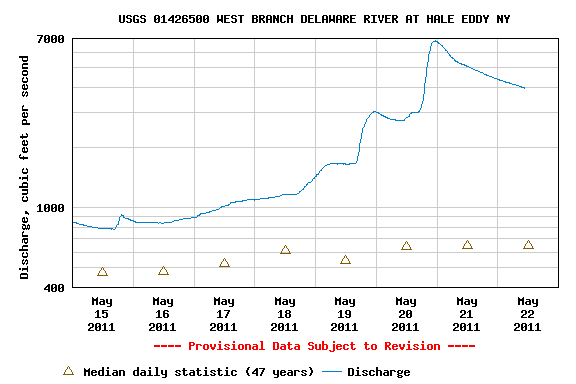 We went from throwing big Double Bunnies to size 18 Blue Quills to now back to big streamers, waiting for the waters to recede and the fish to start rising to March Browns. Floats trips should last well into June and I have days available, to book call 732.261.7291.
Posted by The Average Angler at 12:34 PM