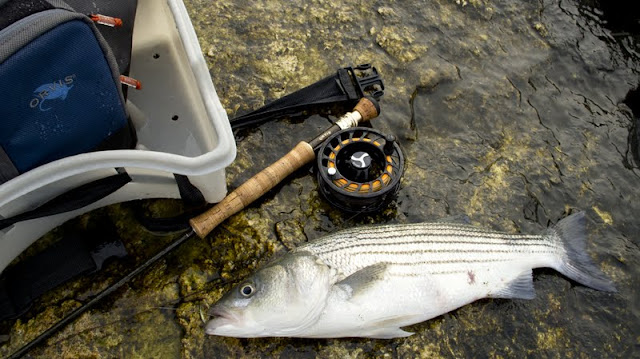 I figured  I would beat the Memorial Day weekend anglers so I got up at 340 and was walking to Brighton at 4am. It was just high tide and the wind was blowing out of the south. Not what I had in mind. I made about 1,000 casts both north and south of the rocks picking up a nice 17" flounder. I had to wait for the tide to start out because the waves were breaking from both sides in the middle of the groin.
By 630 I was out almost to the end. I had it all to myself, and only a few guys were around. I made some casts and worked along the rocks almost high-sticking my way around. I hooked into a nice fish that spit the hook shortly after it was on. I figured I was on my way to a 5 fish morning, including the one that I promised Cindy for dinner! I hooked up shortly after that right at the rock line. It was a nice fight, and I figured landing it would be a task but doable. I would wait for a wave to bring the water in, find a sloped rock to slide him up on, grab him by the lip, and take a picture and release him. Simple. So I had some weight on my favorite 10 wt Helios rod waiting to time the wave. The wave came, I pulled up on the rod, the water surprisingly left, and the rod SNAPPED. I almost threw up.
So now my fish is stuck somewhere below in the rocks. I have 3/4ths of my rod in my hand and the tip section is down with the fish. So I now have to risk my life getting down to get the fish by the lip. Luckily I didn't snap my neck in the process and got the fish up, a guick pic, and back in the water.

Within the hour I was on the phone with Orvis and by 10 am it was on a UPS truck heading back to Vermont. Looks like I'll be getting comfy with my 9ft 9wt Access rod for a few weeks.
Posted by The Average Angler at 3:32 PM