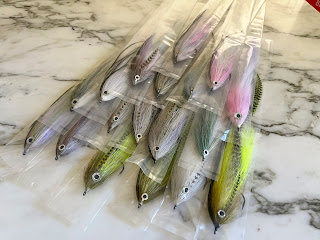 Soon the arrival of herring will mean the late night fishing will begin. I looked through my current assortment of flies, that I tied above, and found they have all been light in color. So I decided to crank out a black fly. I sat down, tied up a mono extension and began the build, not knowing where I was actually going to wind up. Some bucktail, homemade blend, some SF Blend, and some tab eyes. It taped out at just 9 inches, which is what I wanted. I thought it would come out better than it did, but, that's the reaction I have with most of my flies. When I look at it I don't know if I see a baby snakehead or some other non-herring like creature. But that's okay, I will catch a fish on it and report back. 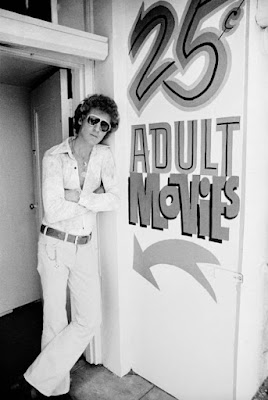 So, what is reality when it comes to tying flies? Now I am not a customer, of say, adult entertainment. Have I seen it, sure, who hasn't on either side of the aisle, the problem with adult films is, that, not unlike what we see with the Kardashians or any other Photoshopped or filtered images of "famous people" these days, its just not reality. I don't look like an adult film star, I can't move like one, and I most likely will never be one, and that's okay, I realize my limitations. 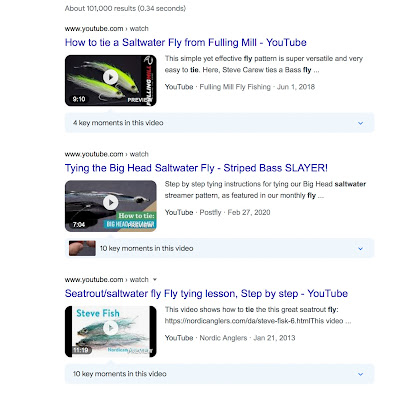 What the hell does that have to do with tying flies? Well, in my twisted mind, a lot. With the technological advancements today, and tyer talent, things, like technique, have become more accessible via social media, and therefore more easily replicated. It's a very nice gesture for someone to try and help others along by creating these videos, tutorials and articles. While we all know the great fly tying innovators and their respective patterns, today we find a new arrival of tyers, well more appropriate, artists. And that's where it makes sense to me. 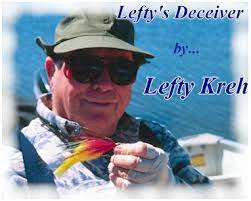 I am lucky enough to have seen Lefty tie a Lefty's Deceiver in person. I was dumbfounded when he would say, "just take a clump (of saddle feathers) and tie it on the back", no measuring, no looking at it, no wondering, it was a three minute fly that caught fish. And that was his goal, similar to other well known fly tyers. Popovic's flies, he says, were designed to solve a problem, and in order to catch fish you have to match the bait, which he did over and over again. 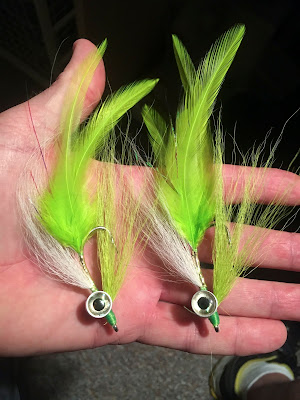 In recent years my buddy Leif started tying what I call the "Ugly Ass Fly", a stupid-simple effective and get-the-job-done-fly that has taken striped bass from Martha's Vineyard to redfish in North Carolina and everything in-between, and I mean everything. It ain't pretty, but it gets the job done, a lot of the time, in fact most of the time. But that thing would make famous tyers turn over in their grave. 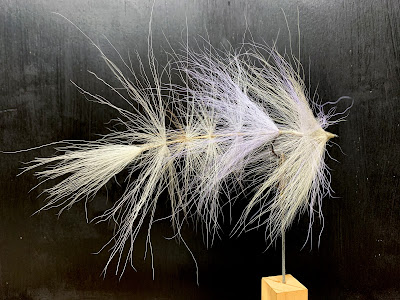 With the absence of one of my "suppliers" this winter I spent more time than ever behind the vice. Some of my flies should be called "Ugly Ass Fly 2", while others came out not so bad. What I have to remember is, I am trying to tie flies that will catch fish. A hungry fish scouting around for something to eat will hit just anything anytime if it presented correctly at the right moment. That goes from plugs to flies, to, well, a store bought shrimp like I witnessed the other day. 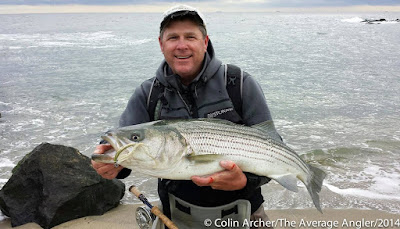 Now don't get me wrong, when fish are keyed in to bunker, you better bring the meat, and if they are on bay anchovies you better scale down. What then, is the necessity to tie a perfect fly from bow to stern? Will it catch more fish if the profile and action are kind of similar? I have seen on You Tube videos absolutely beautiful flies, big and small, tested along the bulkhead or in the bathtub that have sweet action, but I have also seen less than perfect flies swim pretty darn good as well. 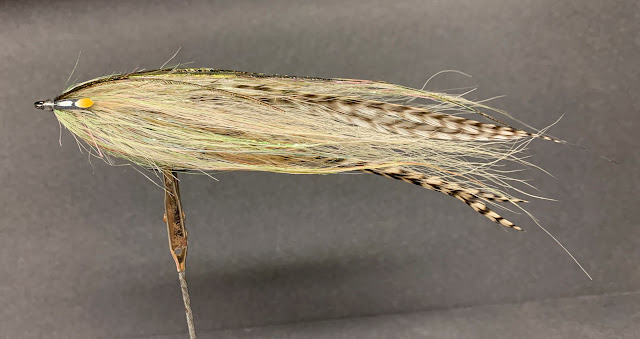 As I write I have just been notified that my recent order from Squimpish Flies has begun its journey to my house. It's a great synthetic material and is being used by the most talented tyers here and abroad. While I, and maybe you, may not get the taper perfect, or the top and bottom blending perfect, it is a great product because it "protects" the novice, or The Average Tyer (maybe a new blog?) from most imperfections in the tie, while bucktail is a little less forgiving. SF Blends are similar in that they can be tied in a variety of ways, and take a trimming from sharp shears very well. 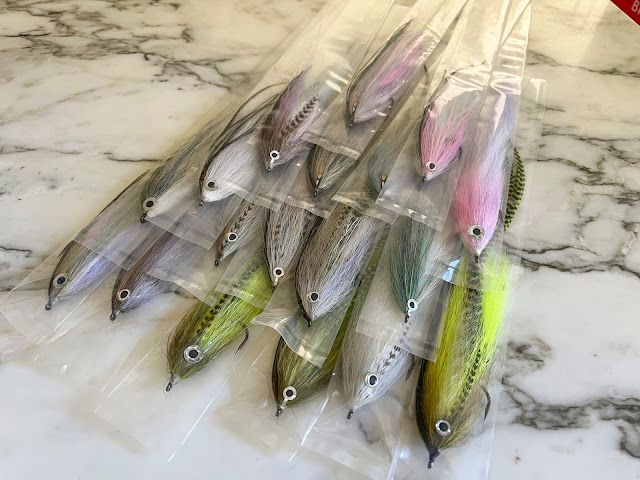 That brings us to todays tyers, again artists. They have a talent, you have some too, but it may not be from behind a vice. Maybe you are fishing fanatic, watching times and tides and fishing around the clock when you can, great tying without the fishing part makes you a great fly tyer. Generally, the flies you tie are good enough. Good enough to catch striped bass, good enough to be shredded by a bluefish, and good enough to donate to the river bottom or the top of the tree you caught on your backcast. 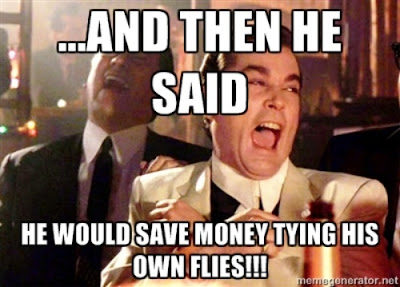 This post is only talking about saltwater flies, that freshwater stuff is in a league of its own. You may be a fly buyer more than a fly tyer, and that's okay as well. Maybe you get by with a little help from your friends, and thats okay too. The big joke is thinking that you'll save money by tying your own flies. Ask anybody that has a spot in their house that is their fly tying den. Hundreds if not thousands of dollars of hooks, materials, tools, gunk, goop, flashlights, and lights. It may pay in the end to just purchase. But purchasing gets expensive also. There are few production tyers out there. For cheap flies 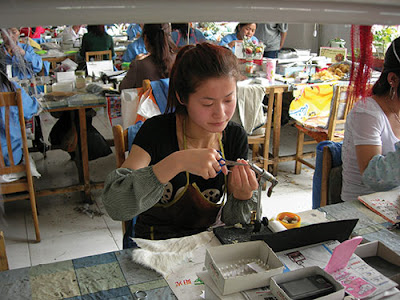 you have to order overseas from the tying mills where child and labor laws may not be in place, and the biggest companies out there get their flies from overseas, when the last time you saw a honest walk through done of the people who tie those flies? You can read a good post on it HERE, from The Itinerant Angler. They aren't people serving time, your local Boy Scout Troop or from the assisted living facility her in the United States, lets just be real. That's why they are cheap, in both price and quality. The prices non-production, although they may crank them out as fast as they can, tyers get are well justified. How much money do you make an hour? Do you know how long it takes to tie a Beast Fly? And how much talent it takes? And the materials? C'mon man. 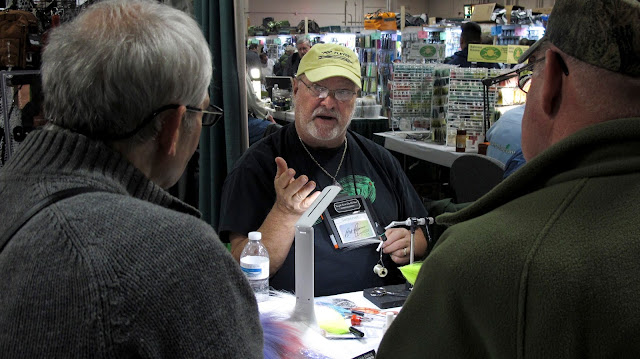 But there seems to be a difference between todays best tyers, not all, not generalizing, and the best from the past. Very rarely was there a financial reward attached to their passion. Maybe a few bucks from doing a class, maybe some royalties from a. book or allowing a company to pimp your fly, but it was more of an open door and transfer of information. It was about growing the sport and sharing the knowledge. It happens today, don't get me wrong, but it just feels different. People are getting paid, and I don't know if the right ones are reaping the deserved awards. But who am I to judge and who cares what I think. 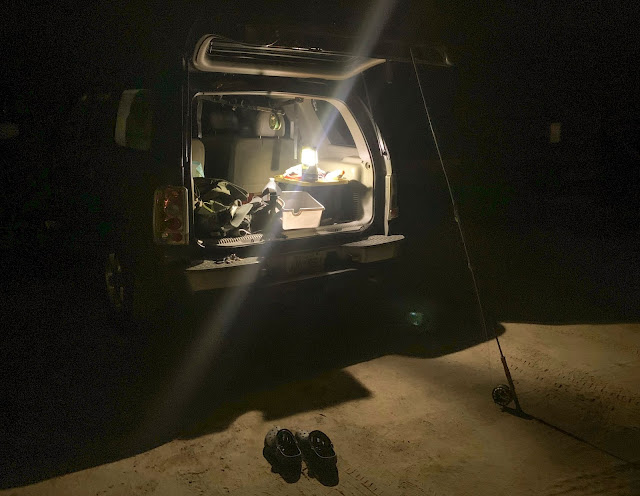 So, in the end, tip your hat to those super talented guys and girls, support whatever local fly tyer or supplier you can, you'll get better stuff and a lesson to boot, and enjoy tying or buying or a mix of both. Remember this the next time you find yourself out on the beach or enjoying a butt under the parking lot lights at 330 in the morning when your bud is looking for that right fly before you head back out. What do you see stuffed in their fly wallet or zip loc bag stuffed in their StormR? The same shitty ass fly they've been using because they either caught a fish on it, once, or are too lazy to swap it out for one of those shitty ass flies they tied up over the winter. Either way, don't feel less, you tie a nice fly every now and then, you'll catch some fish on them, but remember, you will never be a porn star.

Posted by The Average Angler at 4:01 PM