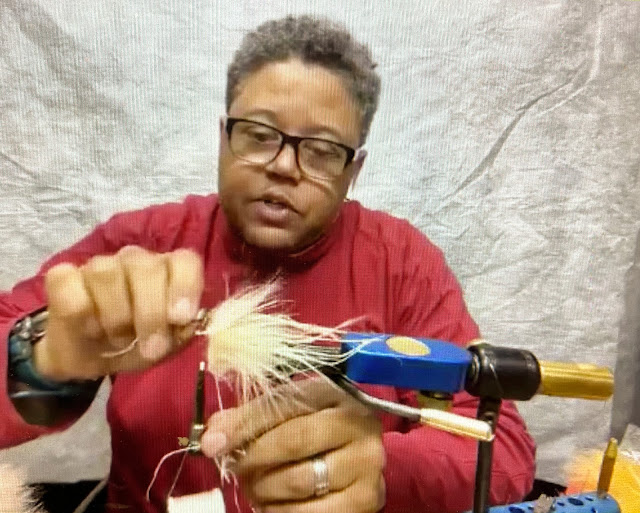 Super cool session last night on MOTF with Jason Taylor. I don't want to come off like it's a love fest or I have feelings for this guy, but this guy's a really nice guy, last time I'll say that. So I set up my computer down in the dungeon and got my materials ready and BANG.....in about three minutes I was already behind, but that's okay. In the end it was better for me to just sit back and watch him and listen. The below pic shows me in action, but what is most disturbing is, at 54 now, I have, or maybe have had, that old man turkey neck starting. I hate having a turkey neck. I remember wrestlers in high school used to strap weight plates to a harness around their necks and do head lifts.....I need to find that soon. 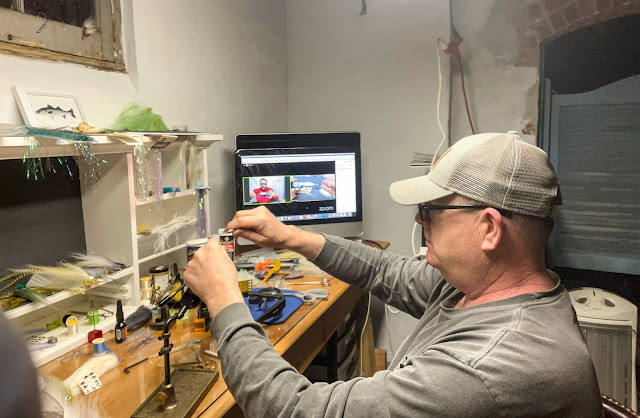 Jason tied three flies, one with bucktail, the other with Squimpsih, and the last with ostrich, marabou and schlappen, which was a fly way over my pay grade. The thing that I like about him, okay, here we go, but he is truly a regular angler and tyer. Good at both, but he's just a guy that loves to fish and tie. He comes in with a red Target sweatshirt and a cloth backdrop and goes to work. No fly tying den with logos and stickers and shirts and hats and a background of pictures of exotic places and big fish. Ok,

no more about him. So, I really liked the part where he tied in Chocklett's Filler Flash, although it looks like if you use it you'll burn through a lot of material, to build up a dam?, before tying either bucktail or Squimpish in front of it. It gives the front of the fly a nice taper, if you tie it right, and adds some bulk. 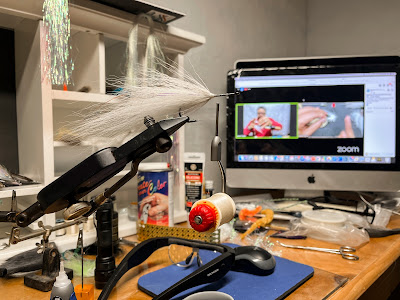 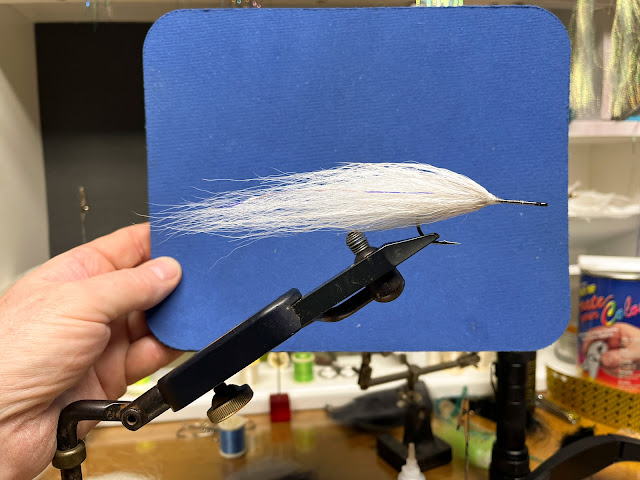 Alright, the other thing I liked, here we go, is he just doesn't get sucked in to question about product endorsement, what to use and buy, which, can really cause someone new to the sport to run and buy what they may or may not need. "If I buy what he uses then my flies will come out the same". When asked about what hooks, and they are a tom of them out there, and some very expensive, he replied, "Ones with points", and the same about his bobbin, he told more of what he looks for in one, rather then just give the brand, which would cause the watchers to pull it up online and order it. He did speak of his   Regal Vice, and I would like to upgrade mine to a Revolution with a Monster Vice Head, HERE. Jason fished up with his Four Feather Fly, well last night he jokingly said, "This one will be a Five Feather Fly", and opened it up to questions, and even offered to go into overtime to show a Hollow or Beast tie. I think he'll be coming back for another session. Hopefully by then I'll have stepped my game up. 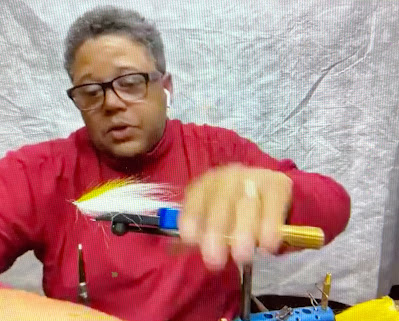 In the end MOTF guys put on another great show, there's a few more dates coming up before it is over for 2022, you can check out the schedule and register, HERE.

Posted by The Average Angler at 8:10 AM