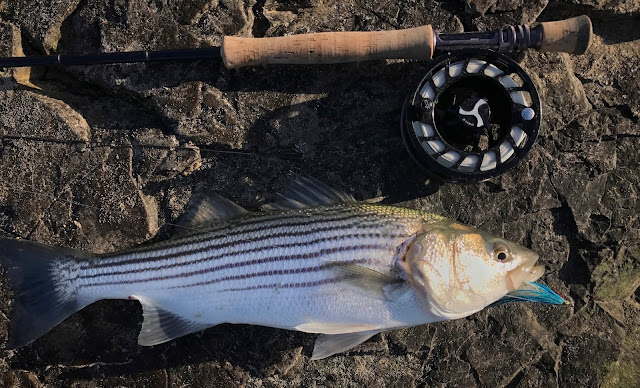 So about 1 o'clock I got to the beach. I'll explain where I came from later, but when I got there it was a whole different planet. The water was flat, the sun was out, and it wasn't fishy looking at all. So I walked the beach, a lot of beach, throwing sand eel flies and Deciever's trying to get something to bite.

It was getting time to get Erin from a school but as I reeled in I looked up and saw Phillips in the distance. Yep, Phillips Ave. Had a bunch of tough moments on those rocks. Shortly after Ryan's service I spread some of his ashes on one particular rock. It had been weeks since I stood on it and, even though I was tight on time, I decided to pay him a visit. 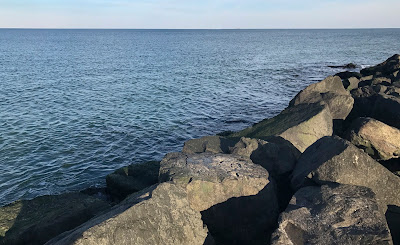 It was the same flat boring water there also, and I spent some minutes thinking about him and playing Blackbird by Paul McCartney on my iPhone. After about a dozen casts I went tight after a long cast. It wasn't a big fish, but it was a fine fish, and the first fish I had caught standing on his rock since his death. It was a nice moment. 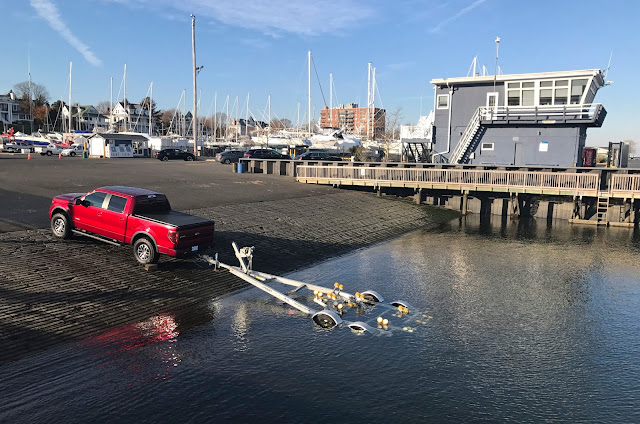 So, I have been waiting to have one last boat trip. Due to scheduling this morning was it. The wind predictions were horrible, especially coming out of Raritan Bay. NW to 25 with an incoming tide. Well, I got wet as soon as I left the breakers. It was a slow ride out and I finally found the birds between Romer and West Bank. Tons of birds. I made my way near them and found the bunker, but didn't see a splash or mark a fish. Conditions were similar across the pond but, from what I hear, they had better results.

Thinking they must be out, like three miles out I took the wet, shitty, sloppy, ride and marked some fish in tens of feet of water but between the wind against tide and the quick sets I didn't last long. As bad as it was, it got worse when I turned around and pointed myself to the dredge at The Rip. It took a long time to get there, and then even worse passing through and then turning the corner inside. When I got there the Coast Guard was waiting. I guess they figured one of us idiots was gonna need help.

while I knew the afternoon would be great with the same wind and outgoing tide, I just couldn't do the later session. I would have loved to been out there, I bet it was good. The new ride is sweet, handles the boat great. Handles the ramp at near dead-low tide, okay.....thank God I'm a multi-chock kinda guy. wouldn't it just be my luck to sink my new truck?


Posted by The Average Angler at 8:18 PM