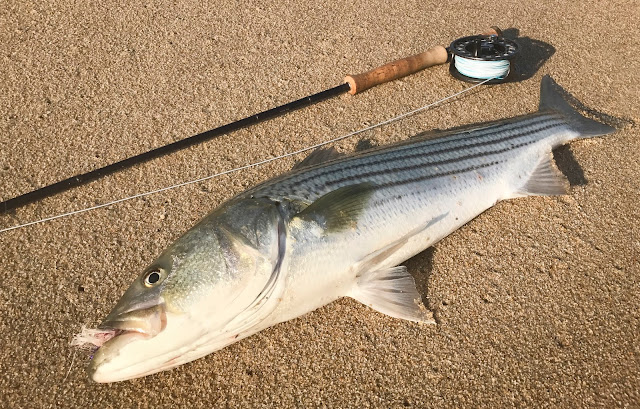 I'm putting myself between a rock and a hard place. I have this big project due at school. Tonight is an evening with the Dead & Company at the Garden. The girls have to be driven to school. What to do? Ask the wife for permission and some help, get a yes, and then hit the beach.

I started taking a look and meeting two nice guys that were just coming off the beach. They were ready. They had found good fish yesterday and we talked a little about striped bass, the stock and releasing them, and the ridiculous boat traffic as of late. They had a plan, I didn't, and we went our separate ways.

I stopped by a spot I have come to like and as soon as I made the turn the trucks and cars were lined up. As I crested the dune they were lined up on the beach. Later. I didn't care if there were fish in front of them or not. I want to find my own fish. 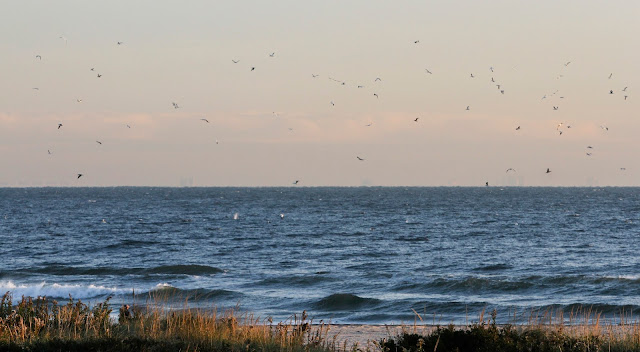 So I got back in the truck and found a plethora of birds off the beach diving on bait. I made my way down to the water and gave it a go but in my mind I was trying figure out which way they might head. I got back in my truck and made the decision to not chase, but settle into a spot and just fish. When I parked there was one truck parked. It was perfect.

When I got to the water it was game on. The truck owner was hooked up. The birds had done what I thought they might, and they were over bait and bass. The bunker was spraying in the waves and where bass, some big bass, were blowing up on them. They were in range and my first cast had me go tight, on an 20" fish. Not that I don't like the schoolies, but really? 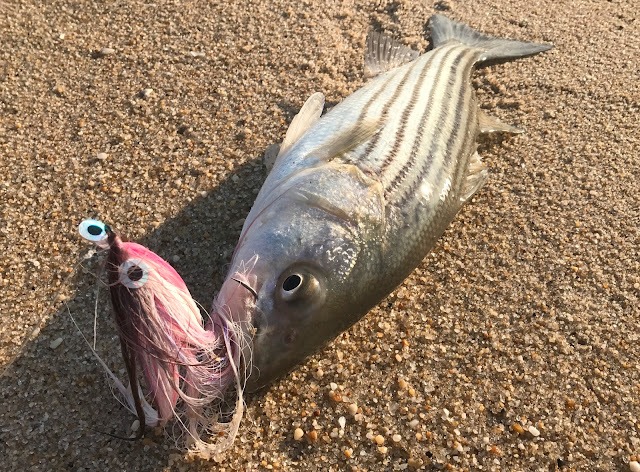 The bait, birds and fish were inside the bar and the action came and went, over and over again. Lasted maybe a good near 2 hours. Soon, we were joined by others, in the end maybe a dozen guys on my left and right. All spin fishing and most throwing big poppa-ma-jiggers that caught the really big ones. There were teens, 20's, 30's and 40's in the mix and all, but one keeper, were released. As the water ebbed the bite was over the bar and it was time for me to go get to schoolwork. Those two guys I met earlier arrived when things had slowed. 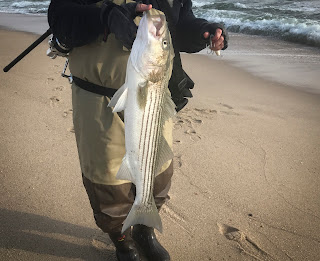 One reason I like fishing alone is because when you catch you think that's it. They were there, I got them, I'm happy. But when you're catching the smaller fish, for me it was a good day of 10 to 32 inches, you don't want to see what is really out there in front of you that you just can't reach.
Posted by The Average Angler at 11:31 AM