A few days removed from the full moon and the tides have settled down a bit. That coupled with the brakes hitting the N wind and the swells spaced out a little bit made for a good morning. The only downside was the water is getting a bit off color, but holding it's own, as the effects of some strong NE winds over the last 36 hours are catching up.
This morning I was able to fish as there were no bites for a last minute "combat fly fishing" trip that I offered up for this morning. I fished with another fly fisherman and was later joined by a spin fisherman. We started just about dead low tide and watched and waited for the tide to bring the water, and fish, up and over the structure and into some good lies. Like clockwork the fish started to take Clousers, and later a spinners plug, swung into the bass' ambush waiting zones. In the mix was a nice fluke that taped out just shy of the 17-1/2 dinner plate needed length. I finished up on the rocks where I caught a nice 22" inch schoolie that I watched hit a chartreuse and white Clouser on the top of a wave. 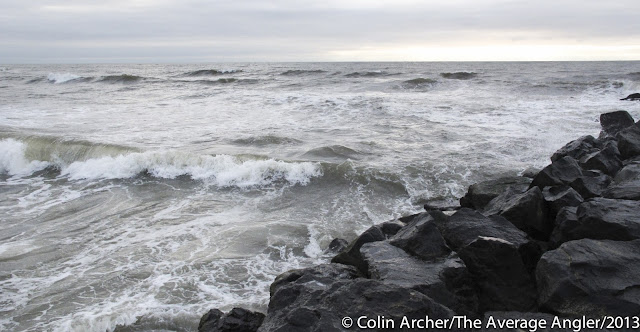 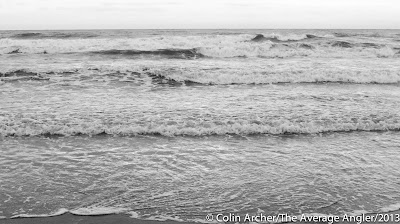 Posted by The Average Angler at 9:14 AM