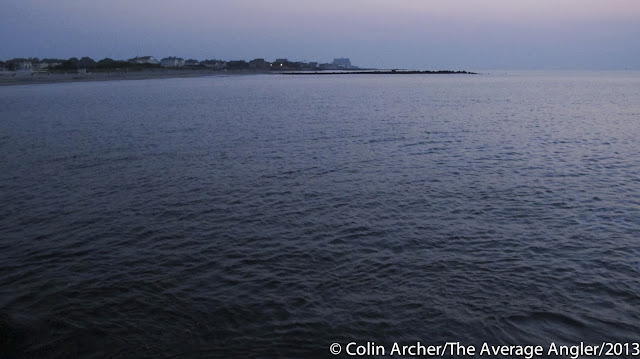 So after seeing "a fin" in the shallows yesterday I was all jazzed up that a small shark or sharks were combing the beach early in the morning looking for a meal. I figured I would go back out early this morning on the hunt, or should I say, the wait.
As I stood on the end of the groin as first light came up I noticed that "fin" in the water between the groins. It or they moved closer to the other groin so I hurredly made my way over to and out on the next one. The "sharks" were in range. I had a larger Jim Matson tied Deceiver and I added a little "juice" hoping to get a scent in the water that would attract this or these ferociuos predators.

Okay, here's the deal....they were cow-nosed rays. Cow-nosed rays, or skeetes, Rhinoptera bonasus, are common in our waters and put up some fight as they flap there wings with brute strength when hooked. Although these rays looked like they were on bait, particularly the sand eels that are around, they, I believe, are spawning, with the females being courted by several smaller males. The spawn from June through October. They are oviviviparous, meaning the young gestate inside eggs inside the female rays body. Gestation lasts between 11-12 months and usually a single pup is born. As adult they can weigh up to 50 pounds. ( from www.wisegeek.com)

The courting, or blitzing so I thought, occurred from the line at the groin ends all the way into the wash. I downsized flies and tossed a Clouser when they came in, just in case they were eating as danced around. I likened it to the freshwater fly anglers pursuit of carp, but had no takers, although I did have my fly line rub in between a few of them as they swam by.

Even though they didn't turn out to be sharks, I have to say it was exciting for the while until I actually figured out what was going on. My buddy Rich was out and snagged on it the wing early on before we smartened up. It was released unharmed.

After I originally published this blog post, Bob Popovics sent me a link to a video he shot of cow-nosed rays in Island Beach State Park. A fly angler hooks into one. Great video. I can't embed it, but you can see it HERE. For more great videos go to the Atlantic Saltwater Flyrodders website and go to the menu and search Multimedia and Fishing Videos. 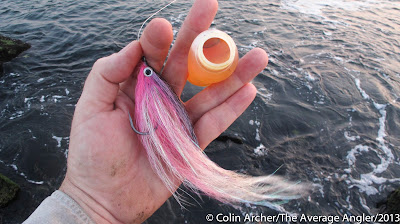 Posted by The Average Angler at 9:18 AM