This whole story is just perfect. I got a call two days ago from Guy about a fly fishing trip on the Jersey Shore. I introduced myself and my walk and wade and boat trips for striped bass, bluefish, albies, and fluke. I also told him about how the spring was, or wasn't, and how the summer bite had been, or lack thereof, except for a slow pick of smaller sized bass.
If you have been on the beach, rocks, or boat since the beginning of June you know how it has been. This time of year brings some great things as far as fly fishing. Early starts, beautiful sunrises, lots of practice, and a slow bite from the schoolie resident to just keeper sized bass that have stayed along the Jersey Shore. There hasn't been a lot of bait to keep the bass in, but like fluke and the short to keeper ratio, there is a bass trip catch and not catch ratio as well.

So yesterday I spoke with Guy and figured we set something up for the fall that would make his four hour drive from near Binghamton worth it. We ended our conversation as we'd be in touch and fish sometime. A few hours later he called back, and said, "I'm on my way, let's fish tomorrow morning." Okay, game on. I told him we needed to start early, like real early.

He made the drive and looked for a place to stay near my house but there was no room at the inn, or any inn that he checked. He went into Asbury Park before midnight, and couldn't find a room or believe how many people were out. I think he was surprised of all the gay and lesbian couples he saw. He actually caught the first night of Sand Blast Weekend, the annual LGBT beach party weekend that occurs in Asbury. It draws a lot, I mean a lot, of people each year. So, he slept in his car in front of my house.

When I opened my front door at 345 am he was ready to go. A quick coffee at 7-11 and drive to the beach and we geared up. Guy had never fly fished the salt so we fitted him with a stripping basket and spikes for his wader boots. He lives near Deposit New York and the West Branch of the Delaware River so this was a new experience for him. Guy owns the Afton Golf Club, so if you are a golfer and are in the Catskills, check out his 18 hole golf course. You can see it HERE.

We started popping along the north side and made our way out front without a bump. With the last week having been slow, dead stop slow, I was beginning to worry as first light and the sun came up. I was okay with the way things were going because I had explained current conditions to him to a 'T". However, this morning was different. With a cold front approaching and pressure change this just felt and looked better. We fished lots of while water into the 530 am high tide and after an hour into the ebb we moved to fish the wash. 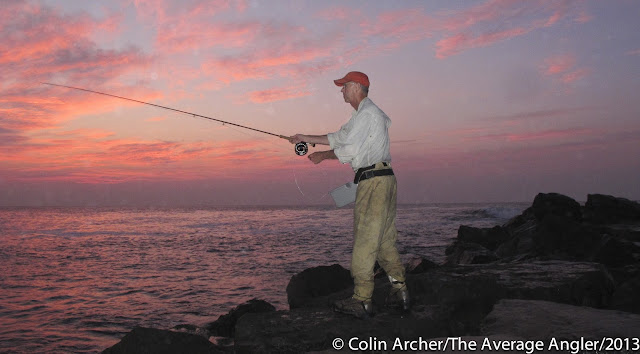 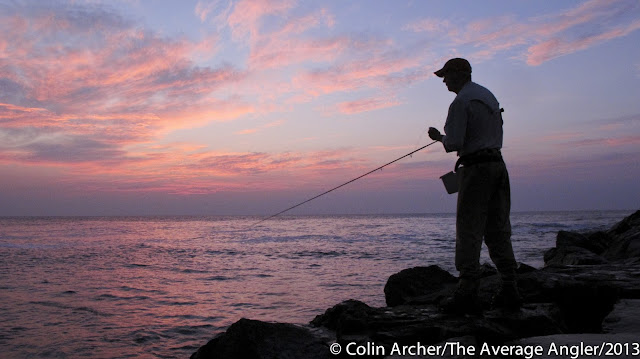 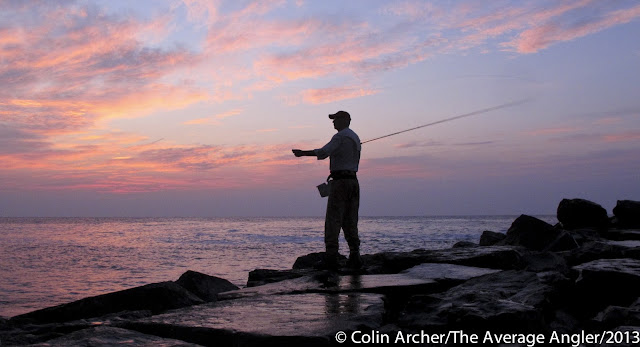 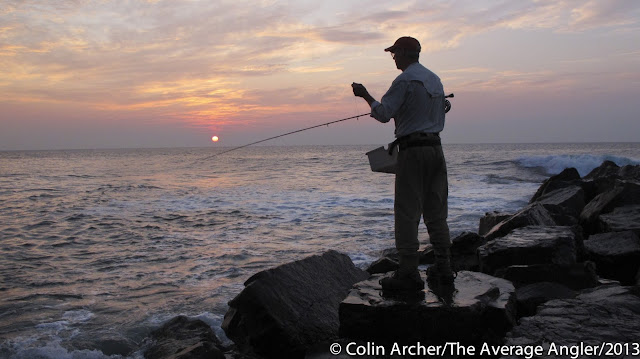 Guy had switched from the floating line/popper set up to and intermediate line with a white and chartreuse Clouser. With steady waves crashing on the beach and rocks at our feet and a WSW wind that was picking up we were getting soaked, but I told him this is the side we need to fish on. He worked the fly into the wash and worked the trough. Then I heard him say, " I got one." 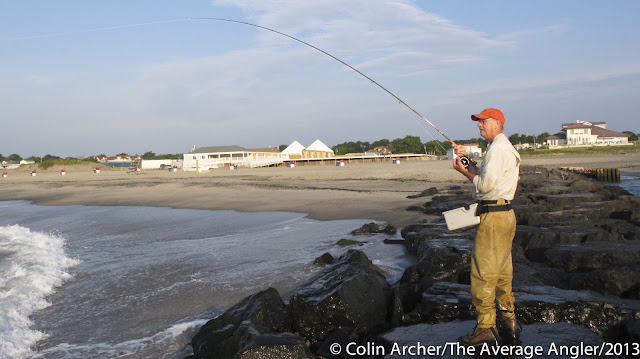 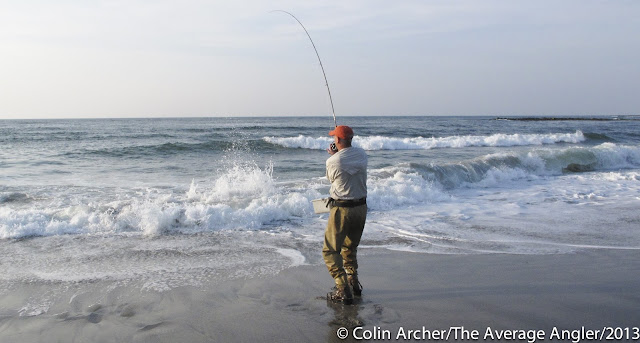 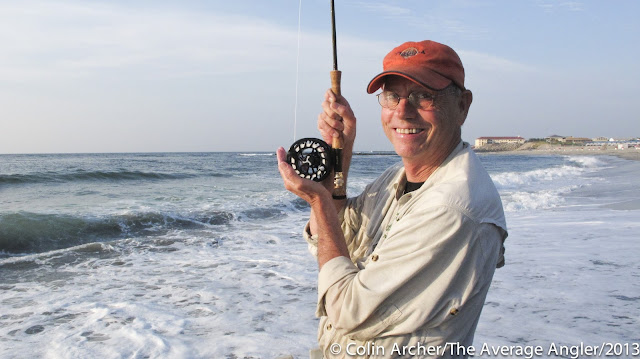 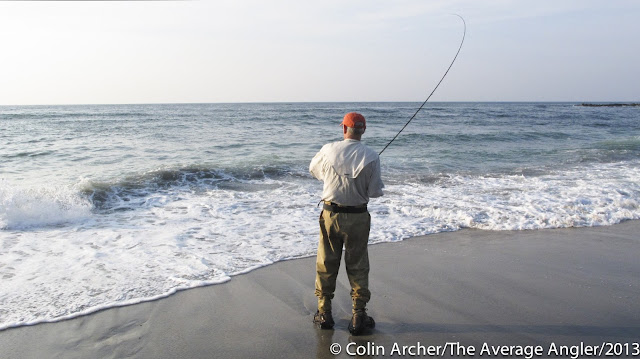 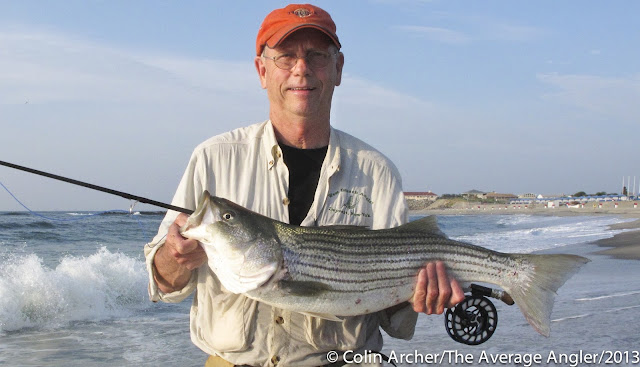 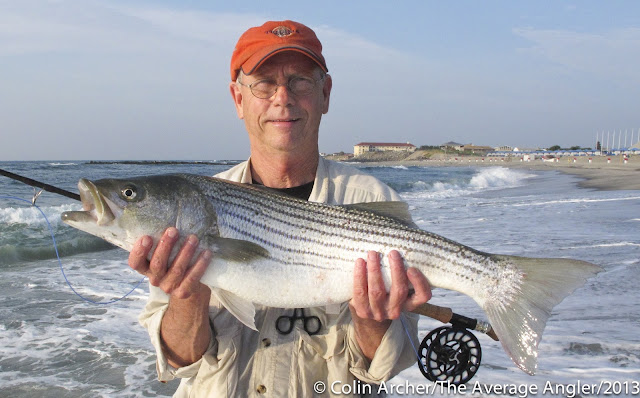 Buy the time I looked he was already into his backing, and the reel was emitting a steady scream. At first I thought it was a cow-nosed ray. We were only 30 feet into the groin so I told him that we would be better off landing the fish from the beach. Guy did a great job taking and giving line as needed and beached the fish perfectly. It was a good fish. No, it was f'in great July-heat-wave-been-dead-slow-bass. 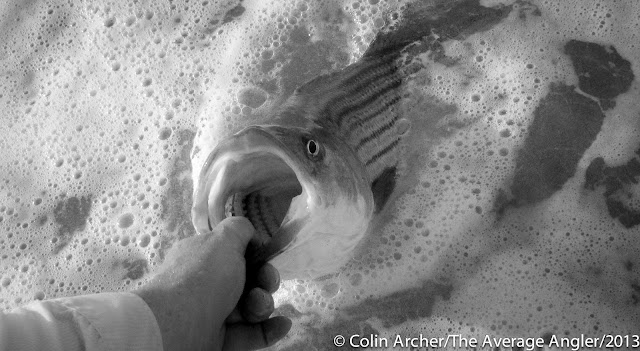 After a few pics the fish was gently released and swam away with some strong tail kicks. He went on to catch a 3 inch snapper and fished for another hour or so before saying, "I surrender." He did a great job working hard and making a 1,000 casts popping and Clousering in good waves and wind.

There's nothing like a days fishing when a clients day is made, but today, the guides day was made as well.

Posted by The Average Angler at 10:37 AM