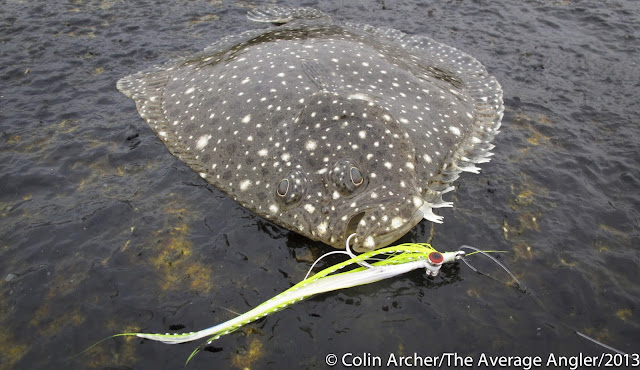 Of course I was hoping for a repeat of yesterday. Luckily I didn't have to hear, "You should have been here yesterday." Got out just after 4 am and found big surf in the darkness. Went to work with a black Jonny King Kinky Muddler that went untouched for about an hour. As the light appeared switched over to a chartruese and white Clouser and got ready for the action to start. Let me cut to the chase, when I left at 830 I was still waiting.
The S wind pushed our normal south-to-north current almost sideways into the south sides of the groins. At times it appeared the waves were coming directly from the south. It brought lots of grass with it and at one point the fly had to be cleaned off after every retrieve.
The bass weren't around or their mouths were welded shut this morning. However, if you're into them, the sundials were eating. I landed three and missed a bunch more when they were gumming my fly.

Scophthalmus aquosus, also known as spotted flounder, sand flounder, windowpane flounder or sundial are common and prevalent in our waters. They are often mistaken for winter flounder or fluke. Sundials are more round in shape, are thin bodied, have paper thin and translucent mouths, no teeth, and are a left-sided flatfish. Left-sided as in, if you face the fish to the left, the eyes are on the upper portion of the fish, similar to a fluke. Window flounder on the other hand are a right-sided fish.
Posted by The Average Angler at 9:26 AM