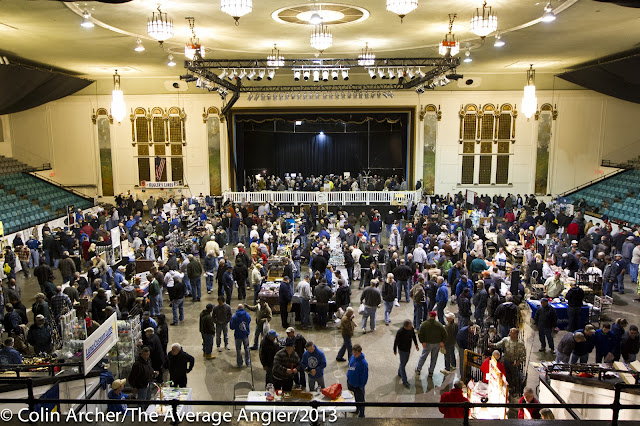 As usual the Asbury Park Fishing Club Flea Market was a success. Tons of people came to Convention Hall in Asbury Park to shop and pick up "stuff" for the upcoming season. Just when you think people are flea marketed out, there's always room for one more show (kind of reminds me of those good old Grateful Dead days!). People lined up in anticipation of the 9 o'clock opening and the mad rush to select plug builders happened as soon as the whistle was blown.
Being the APFC's lone fly fisherman and a little handy with a camera I was designated the official photographer, which means I was asked to take pictures. Shooting inside CH is never easy as the mixed  and poor lighting never has two images looking the same. I shot more video than stills and hope you enjoy the video below.

For me there wasn't much to buy but I did get interested when fellow club member and 50 year fly fisherman and plug maker John Scelfo showed me what he had scored. It was a box of 100 XXXXXXL Squid Carlisle Hooks. He was thinking of using them for sand eel patterns, I was thinking of something along the line of a big long something fly. Later in the show I saw my buddy Jason, Jason Dapra, who I proudly showed my $2 purchase to, and he said, "Horrible". "Big fish loser, to much leverage for the fish......don't waste your material." Talk about a buzz killer. But he did have a positive thought, 'How about tying down low on the shank for bluefish?" Now, that's a good idea. 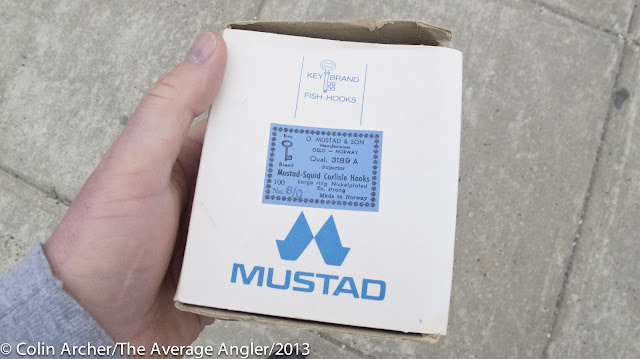 Posted by The Average Angler at 2:47 PM