12.14.12 Back from Baltimore.....and good news for the bunker, bass, and other fish and birds that eat them 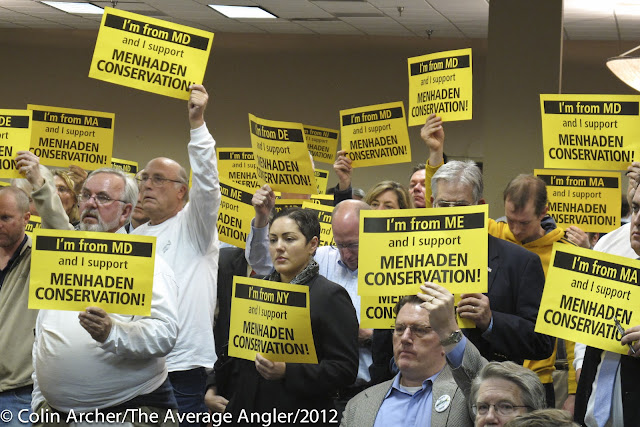 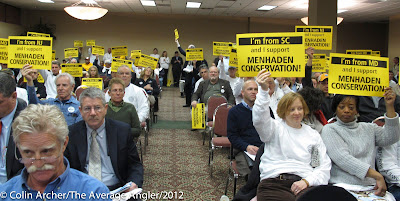 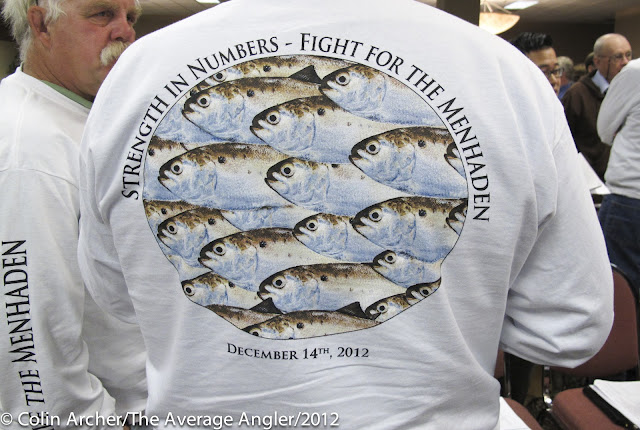 It was a long 36 hours, but well worth the trip. Luckily the four of us were able to stay in the Best Western right where the ASFMC meeting was going to take place. Thursday night was a welcome meet and mingle and drinks at the bar and a good nights rest before the excitement today. The ASFMC meeting was called to order at 830 and it was right into a few hours of business before getting into the big vote around 11 a.m. It took several tries but the settled on reducing the catch of menhaden for 2013 some 20%, from over 2000,000 metric tons to around 170,000 metric tons. That goes from Maine down to Florida. The afternoon sessions votes were on how the new catch limits would be enforced (each state responsible) and how the catch limits would be split between the reduction, bait and recreational fisheries. 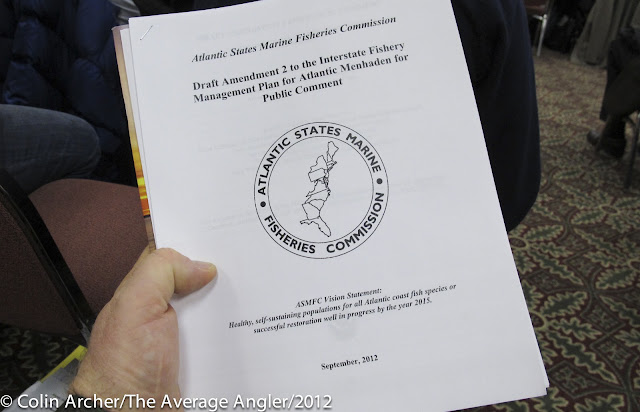 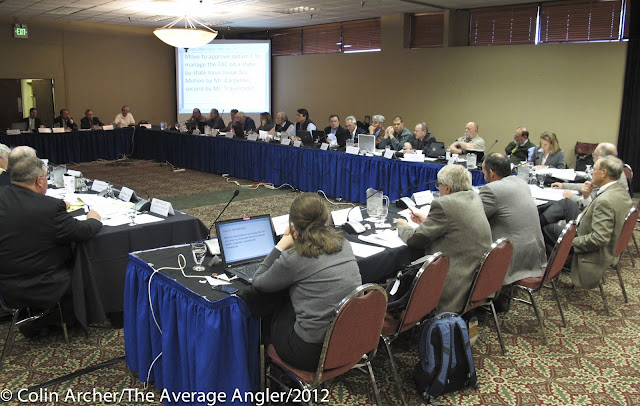 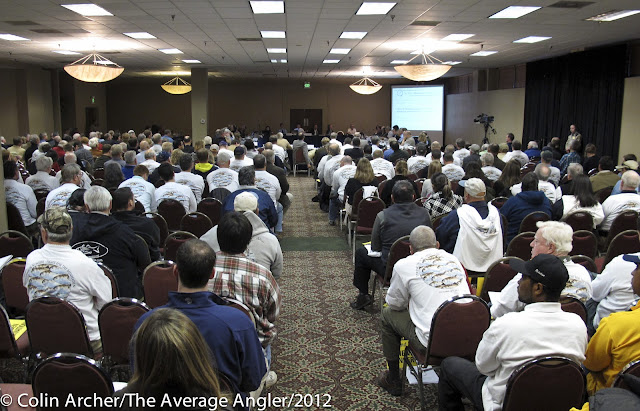 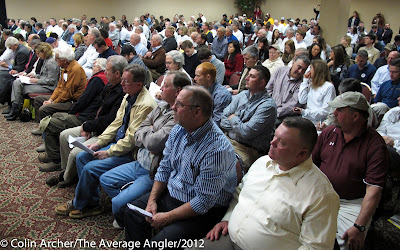 Of all that I saw over the last day and a half, a few things stuck out-

-  Alot, alot, of all this is politically driven. At times the Commissioners from the various states are told, sometimes at the last minute, how to vote- and remember their jobs are at stake. An example- a state that just got slammed with a hurricane and has a portly governor.

- There are a ton of people, from the legit, to bogus, to official, to grass-roots groups that you never really know who's who, and who's real or a faker.


- Free stuff goes quick and people will crash your party if you don't post signs. An example -
Even after the "big" morning vote, everyone ate at lunch paid for by PEW and the CCA. Another- they gave out zip drives and I saw a guy grab at least a dozen- and the t-shirts- well I got two.

- Commissioners will sometimes be recognized by the Chair and speak just to speak, not really saying anything that anyone can figure out. Example- NJ's own Adam Nowalsky.

- Do you remember the stereotypical old, white, fat guys from the deep south we used to see in old black and white documentaries- they still exist. Example- forget it.

- Race cards still get drawn- workers and the NAACP walked up to the front of the room and lined up as the commission caucused on the "big" vote.

- When it came down to it- it really wasn't about the menhaden themselves- or the things that eat menhaden, it was about money, and money, and more money, and some jobs thrown in.

- There were no freaks or geeks-well geeks yes, freaks no, like I said there would be in a blog post before we left.

- And lastly, this is serious business, and was a huge, huge event that I was glad to have been in attendance.

PLEASE SCROLL DOWN FOR MORE 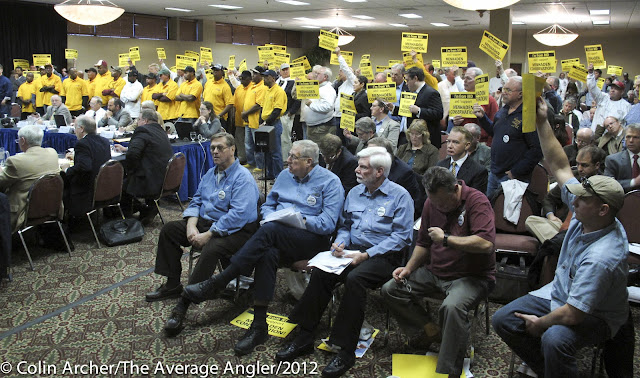 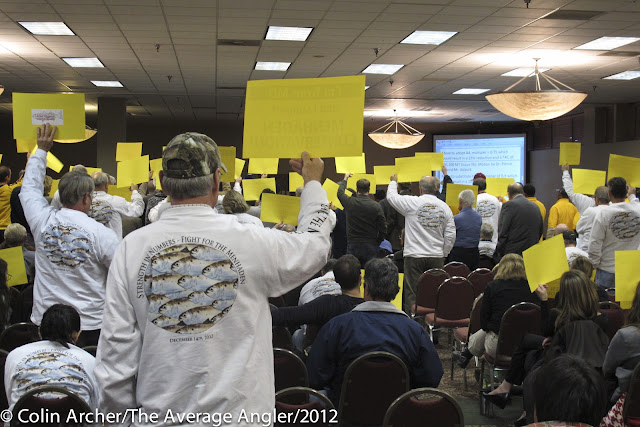 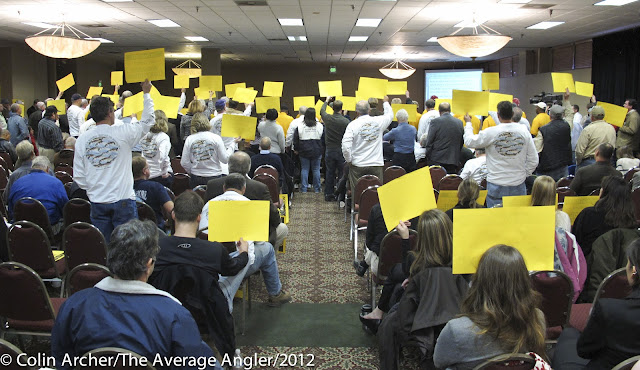 - BUT, what most surprised me was when they went over the public comments. I went to one of them in the spring in Toms River. People from both sides got to address the Jersey Commissioner's. Then there was an open period to write in comments. It also happened this fall, around when Sandy hit. But what surprised me the most was that a tremendous amount of time was taken to count, tally, break up the comments into sections, and report it back to the ASFMC Commissioners and the public. Outside there was a thick gray binder with all of the fall 2012 public comments listed in it. Stock letters were shown with the number of submissions, but the emailed or hand written letters were copied and put in the binder. I enjoyed reading through the binder for about 45 minutes. Correspondance from the big and little people alike.

It left me thinking that yes, our voice does and can matter.

And remember, NO BUNKER= NO BASS! 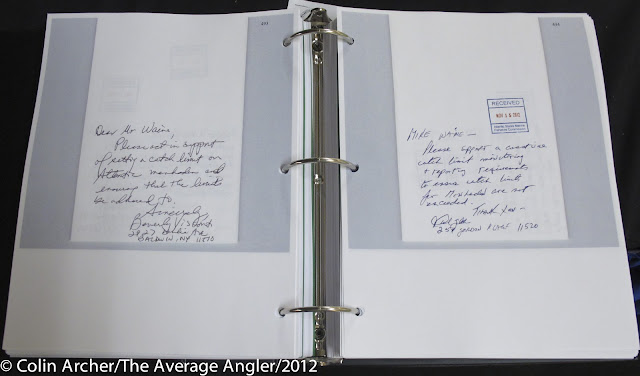 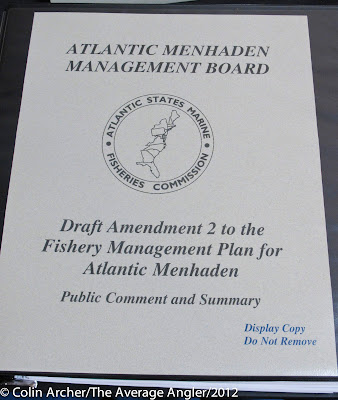