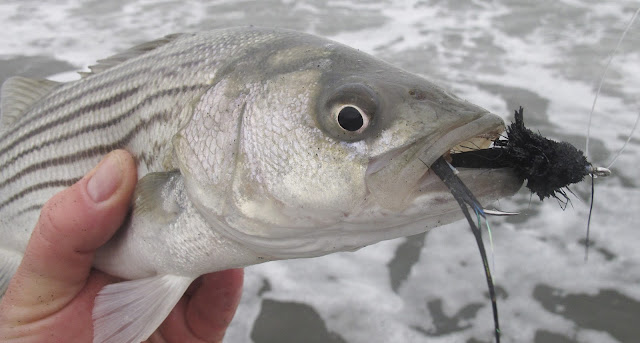 I remember writing a post post yesterday saying how we needed some "good" weather to drop in and churn things up a bit, well, Mother Nature answered this morning. We got down to the ocean around 520 am and when I got out of my truck I could hear the waves crashing and the NE wind howling. It was blowing 20 steady, and the water, from what we could see as we walked down, looked really good. We started out on the rocks fishing the south side of the groins looking to get a little help on the casts from the wind. It was Snake Flies at first, then Surf Candy...neither brought a bump. We jumped down to the beach where it was difficult to get the fly where we wanted. 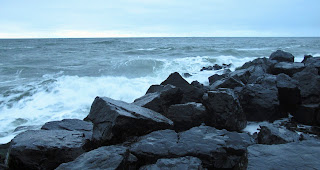 Towards the end of the outgoing we moved to a different groin and fished the north side, into the 25 mph wind. We were loaded with the 350 gr Depth Charge line so that helped a bit, but the casts were limited to 20-25 feet. Rich had seen some bass busting the surface and after a few casts we were hooked up into a nice fiesty schoolie bass. 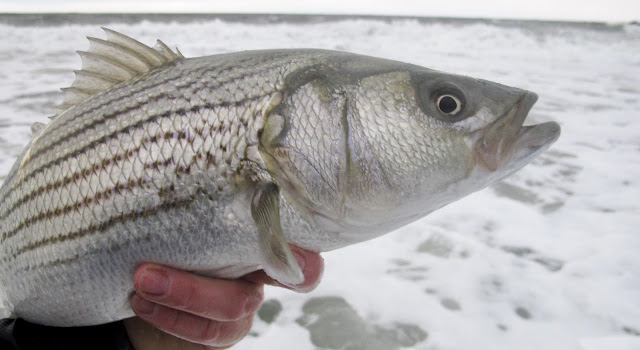 As the minutes went on the gusts picked up and we called in a morning at that spot. We moved down a few towns and fished some really fishy looking north side pocket water that a few guys had just left without moving a fish. A black Snake Fly and about a dozen casts brought three schoolies to hand, the smallest a two year old that jumped out of the crest of a wave to grab the fly.
There was action up and down the beaches yesterday depending on where you fished, and this morning it continued with a pick of schoolies to just under keeper sized bass. Hope it continues. 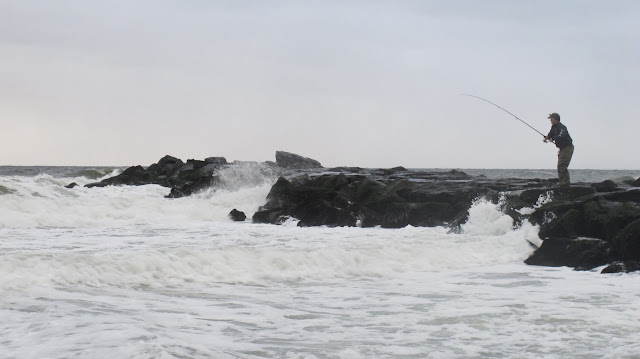 Posted by The Average Angler at 9:35 AM