11.02.11 Fished middle of the night through first light without a bite 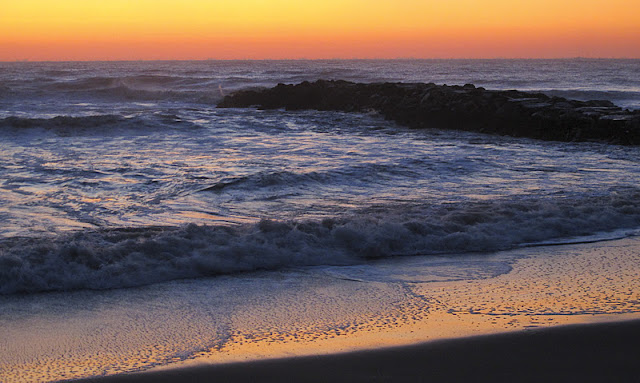 Got to Asbury Park about 3 am to find a nice easy NW wind but kickin' surf on the outgoing tide. Hit The Flume and hoped to continue where I left off the night before. Fished a black Clouser in between the swell that crashed over the rocks. Didn't do a thing there. I took a ride south to Avon and fished the rocks and the beach from bottom to top without a bite. I met another ringer of an angler who started in the Shark River Inlet and then came outside. He didn't do anything either. Before I left I changed spools and put on a large popper and worked in between the swells at The Notch. Nothing.
At around 530 I knew Rich would be up in Deal so I headed there. I fished off the beach and then hit the tip of the Brighton groin before the slack low tide.

I spoke with Captain Jason Dapra of Blitzbound Guide Service and he said on his last trip he found fish galore way offshore. With our sudden drop in water temperature along the coast, from 68-58 degrees in a week, I hope the fish aren't by-passing New Jersey for more steady temps down south.

Rich said he saw birds on bait yesterday off Deal so that's a good sign, although we saw nothing this morning.
Posted by The Average Angler at 7:35 AM