Last week while at Orvis I got a question about using tandem flies. Its something that it used a lot in freshwater and I have used that set-up with good success. It is usually a heavier anchor fly with a smaller nymph hanging off the bend. While nymphing isn't my favorite fishing it is productive and can get clients into fish while waiting for a hatch or the fish to look up. Most of the fishy food is subsurface in both fresh and salt.

For the saltwater I usually use a popper/dropper setup. The other day Joe had a teaser tied on above his larger fly and landed a nice fish that took the smaller offering. Today I had a chartreuse fly on and off the bend tied on a lame smaller blue/white Deceiver that I had laying in the bottom of my sling pack. I landed about 8 fish two on the bigger fly and the rest on the smaller one. Conditions were perfect on the start of the ebb with an easy E wind and lots of cloud cover. There were mostly small fish, one being about 8 inches, but Rich got a keeper. There always seems to be one good fish for someone each outing.

While I bypassed a beautiful river on my way to the beach, the beach is where I wanted to be. Its my favorite place to fish and although the bigger fish are in the bays and in some places the river catching fish where you want and how to is better than just catching because you know where they are. 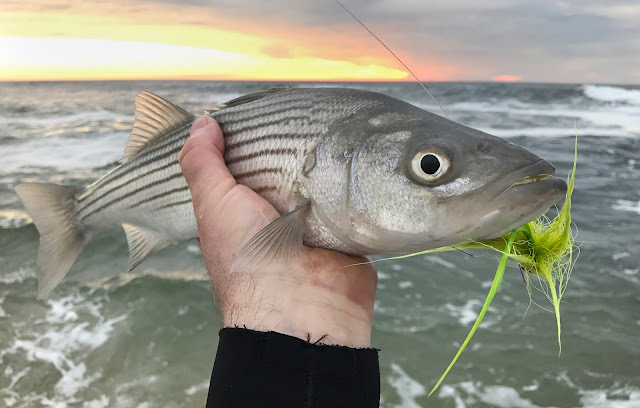 Posted by The Average Angler at 10:25 AM