09.25.11 Nothing out front from North Beach to Deal...but lizardfish on the fly on the Raritan Bay side 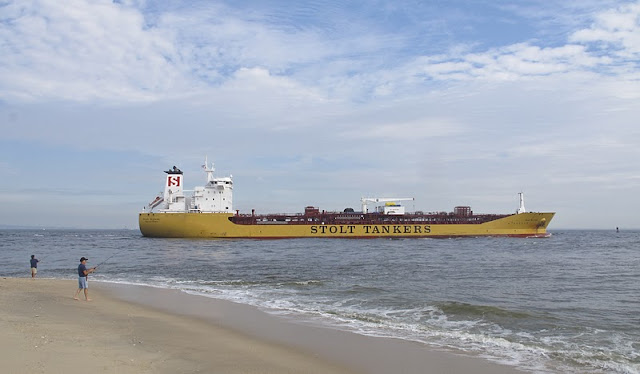 Another early morning. Out on the beach at 530 for the start of the outgoing. Bunches of anglers out, hoping. Ran the usual over the breakers and in the wash and came up empty. Started with a Bob's Banger went to a black Clouser. Uuurrrghhhh. Met up with some regulars and it was nice to catch up since I haven't seen them much since the spring. One had a large bass blow up last night on a popper, but he couldn't hook up. The water was 68, winds still S-SE, swells to 4 feet. I had to cut today short so I was done and hour and half after I started.

Still thinking of the outgoing tide and the sun that was overhead I ran, well took that long ass walk in very loose sand, up to North Beach. Several anglers were out and party boats were nearly parked on the nude beach. Saw some rain bait in the water and made many casts to fish that weren't there. I hoping for an albie sighting but that wasn't to be. At one point I turned to the tip and saw the above large vessel passing by two fisherman who were unphased by the sight. I had to do a double take since it was moving in stealth mode.

As the current moved fast past the end of the hook I looked left and liked what I saw in the cove. Silversides were being chased by something. I figured snappers or cocktail blues so I picked up and entered "the flats". This is my kind of fishing. I made several casts and felt a good hit, a good hit, on my gray and white Jiggy. When I landed the fish it was a 14 inch lizardfish.

Lizardfish are home in the tropics and subtropical marine waters. Since Irene came and went, several party boats have reported lizardfish catches, according to The Asbury Park Press in a September 2, 2011 article written by Dan Radel. They are uncommon north of South Carolina, so it wil interesting to see of they stick around. 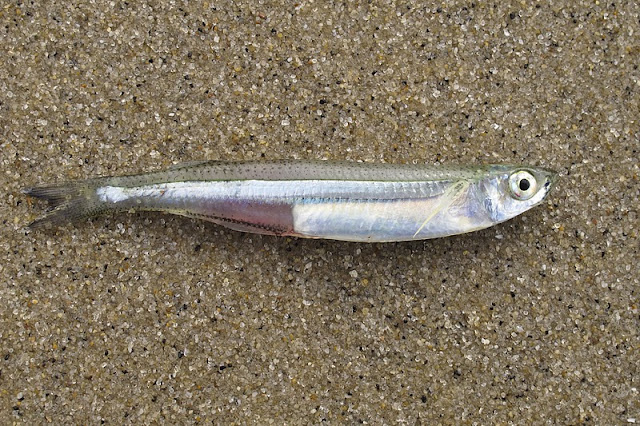 Silverside
Posted by The Average Angler at 8:01 PM