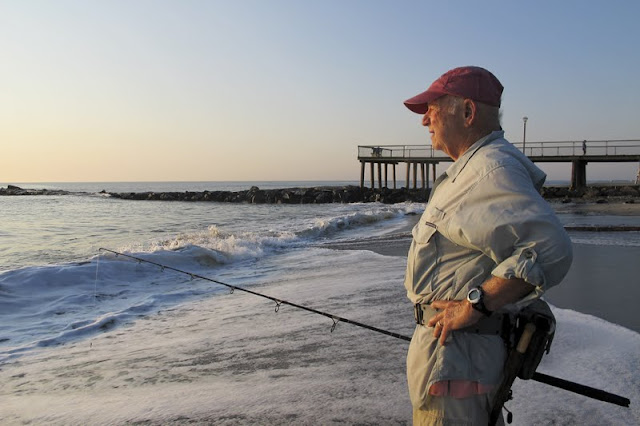 It was a pleasant surprise, but not really a surprise, to see my buddy Al's car in the lot of the beach club in Deal. Fall is here, although summer days still poke around now and then. Anglers I haven't seen since the late spring will start to show themselves on the beaches and rocks. It's fall, and although a little early, and the run is here.
As I made my way down the north side of the pier I saw Al throwing a popper with spinning gear into the surf. My first impression of the day was that this could be the start. I gave Al a good strong happy-to-see-you-handshake and then we went right into what's going on. He hadn't moved a fish, but he had lots of bait in front of him. I Had my Orvis Access 9ft 9wt rigged with a Bob's Banger and made my way down to the waters edge. It felt good to cast with purpose again. I made several casts working the popper over the backside of the breaking waves. With Al to my right a bass blew up on the popper. I didn't hook up but it was a good sign on the first day. We had mullet making v shaped wakes as they cruised just under the surface. Even though they moved in nice size schools, the fish never were on them. I know, it's early. Soon it will be good.
We left Deal as the tide moved in thinking that maybe later on the outgoing the Shark River Inlet may be worth a look, there's a perfect albie storm there. Current, bait, and hopefully the albies are there. But you'll never know unless you go.
Posted by The Average Angler at 8:45 AM